Thanksgiving Football: Namir Jeffries’ battle with Crohn’s puts everything else in perspective for the Upper Darby senior 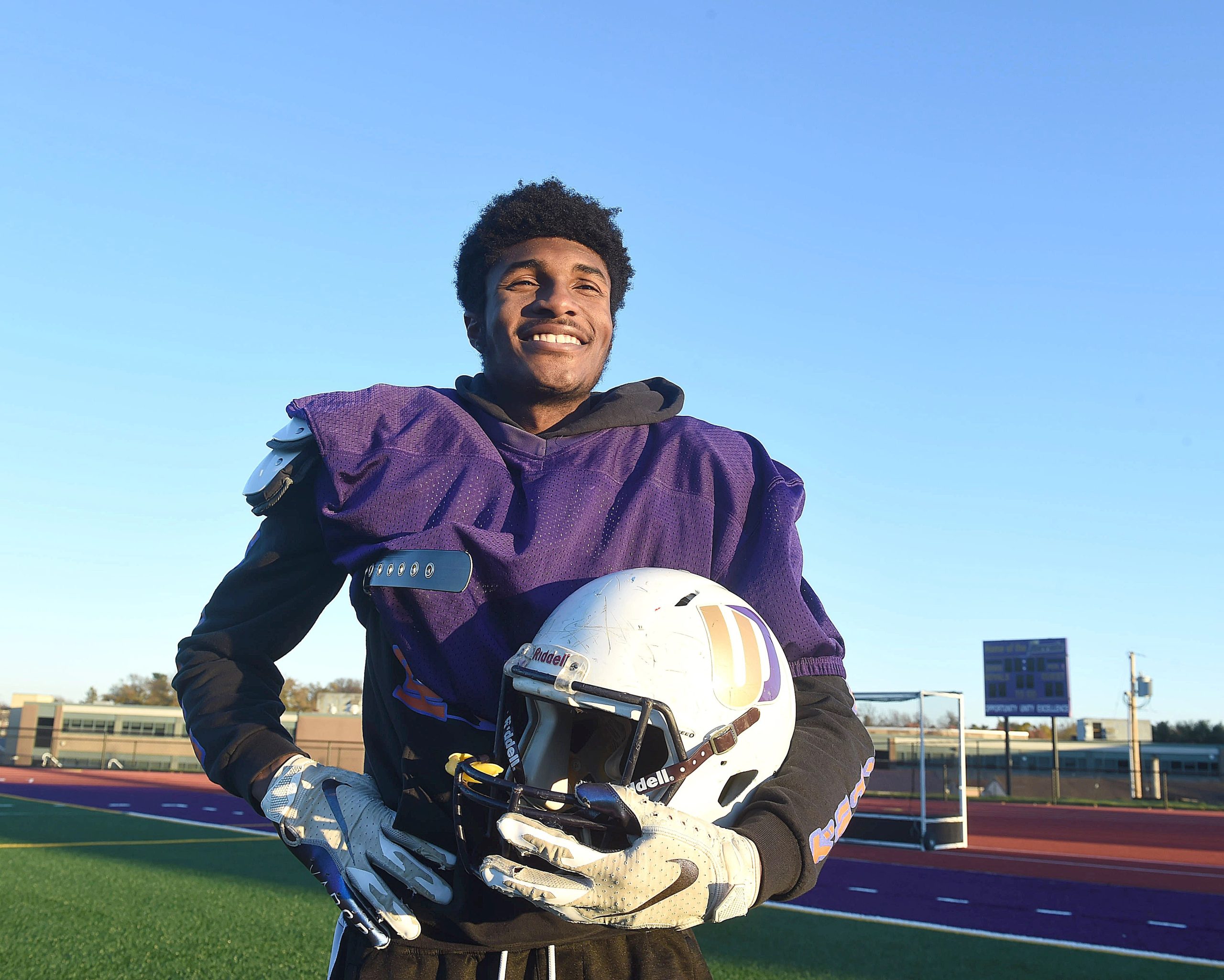 UPPER DARBY — One thing that bothered Upper Darby senior Namir Jeffries was not knowing who he could talk to for advice.

Jeffries was a sophomore when he was diagnosed with Crohn’s disease, a chronic inflammatory bowel disease. Symptoms include fatigue, stomach pain, malnutrition and weight loss. He will have to manage the symptoms for the rest of his life as there is currently no cure.

“When I was a sophomore, I knew something was wrong. That’s when I had all the tests done and was diagnosed,” Jeffries said. “It’s chronic. Every four to six months I take Remicad (via an IV infusion). It depends how my levels are. It’s just something I have to deal with.”

Jeffries didn’t have to look far to find someone sympathetic to his condition. Upper Darby offensive coordinator Ryan Dabney has lived with Crohn’s for most of his adult life.

“He has helped me a lot and he tells me what medications I should consider taking. He knows a lot about it,” Jeffries said. “I feel like we are connected a little bit more because of it. Before my diagnosis I never knew anybody with it until I talked to Coach Dabney one day. He said that he has it and I was like, ‘Oh, snap, you too?’ It’s like we are paired together.”

Dabney, a standout running back at Haverford High in the early 2000s, has undergone several surgeries. He was in so much pain he spent time in the ICU. He has attended support groups for Crohn’s and knows the importance of having someone to talk to when there’s nobody else in your life who can possibly understand the day-to-day struggles.

“I try to tell him good things to eat, things that have helped me. I tell him that every day is a battle, every day is different,” Dabney said. “You’re going to be tired, but you’ve just got to push through it. The pain is something you have to deal with. Luckily for me I take medical marijuana because I’m an adult. That has let me sleep and walk around pain free. Once you get the medicine, that really helps, but the medicines only work for so long. It relaxes your intestines and you feel that right away.

“It’s embarrassing to talk about,” Dabney added. “I couldn’t imagine having this in high school. I didn’t get diagnosed until about three years after high school, so I can’t imagine what it is like to be his age and going through it.”

Jeffries is a two-way lineman and track and field athlete. When he was a sophomore, during the height of the COVID-19 pandemic, the symptoms became so unbearable that he could not compete in outdoor track.

“I’ve had really bad complications with it. In the spring track season my sophomore year, I couldn’t run. It was too painful,” he said. “It was bothering me during football season my sophomore year, but I didn’t know what it was. I was going to school, but it was virtual. It wasn’t until I started going into school again that it got real bad. I didn’t do winter track that year and spring track I couldn’t physically do it because of my complications. I went to one track meet and that was it for the spring season.”

Jeffries has maintained excellent grades throughout high school. He loves chemistry. For a long time he wanted to be a veterinarian, but these days he has his eyes on athletic training.

Jeffries knows that his athletic career could have gone in a different direction if not for his disease, but he’s never been one to complain.

“It feels like I have missed a lot, like I’ve been catching up,” he said. “There was the (COVID) year when I was a sophomore. I was able to play football last year. By that time I knew what I was dealing with. I started (junior year) in football and had a good year. I had a good track season last year (in the) 4×400 relay. I believe we were 0.3 seconds away from going to states. And football this year has been great.”

Jeffries hasn’t made it through his senior season unscathed. In September he called Upper Darby head coach Dave Barr to tell him he couldn’t attend practice because he had to undergo emergency surgery. Jeffries missed the Royals’ fourth and fifth games. Incredibly, he was back on the field in time for their sixth.

“It is what it is,” Jeffries said with a smile. “You just have to learn to fight through it. That’s what I have learned to do.”

Jeffries is without question a key part to the team, someone who can fill a void on a depleted offensive line unit while also playing full time at defensive end. Barr appreciates Jeffries’ talent and determination, and most of all, admires the well-rounded person he has become. He is a beacon of positivity and strength and a role model for everyone on the team, regardless of class.

“The best word I can use to describe Namir is the word genuine,” Barr said. “His energy for the day is genuine, his energy for sports and competing is genuine. The way that he speaks to people is genuine. When he is having a day when he’s feeling bad with what he is dealing with you can tell, but he doesn’t use it as a means to hold him back. He uses it as a means to … push through anything. I give him all the credit in the world. He’s one of those guys you look forward to being around in whatever capacity.”

Jeffries knows there are more athletes his age living with Crohn’s. Maybe his story can inspire others. He is a lesson in perseverance, and is happy and thriving in his chosen sports and school subjects.

“It has put me in a position where I feel more accomplished when I go out and do stuff,” Jeffries said. “I am the type of person that looks at stuff like the glass is half full. It motivates me to be better at anything I do.”

On Thanksgiving morning Jeffries will suit up for his final high school game when Upper Darby meets Haverford at A.G. Cornog Field at 10 o’clock. The Royals (4-6) and Fords (5-5) haven’t played a game since the last weekend in October, the final weekend of the regular season.

Jeffries has fond memories of last year’s game, the Royals scoring the game-winning touchdown in the final seconds on a pass from Montez Ellis to Covenant Horace. With their 28-21 triumph, the Royals took home the Dr. Thomas Ranieri trophy for the first time since 2009.

Thursday marks the 100th Turkey Bowl game between the rivals. Jeffries’ plan is to go out a winner, which would be a satisfying coda to a football career that not long ago was in serious jeopardy of not getting off the ground.

“This game means so much to me,” he said. “I love football and to be out here getting ready for Thanksgiving is great. Our motto every year is to beat Haverford. I was so glad to be a part of last year’s win and I look forward to winning again this year.”