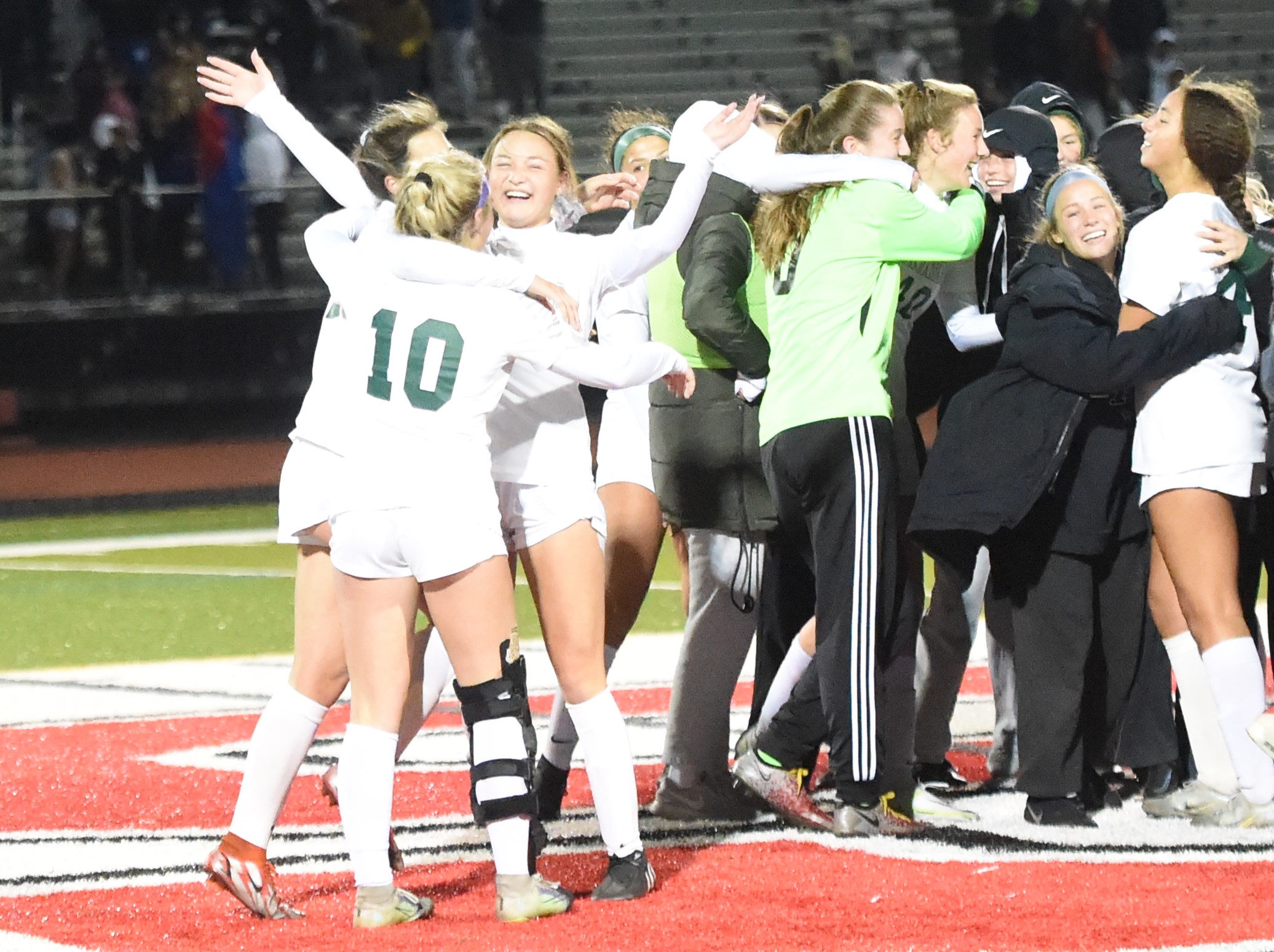 FRANCONIA >> The only two teams to hand the Pennridge girls soccer team a loss in 2022 were Neshaminy in the regular season then Central Bucks West in the District 1-4A quarterfinals.

The bracket – and perhaps a bit of fate – gave the Rams a chance of redemption against both sides in the PIAA tournament, which Pennridge earned with victories in the past two rounds to reach the state championship game for the second time in three years.

“It literally felt like the stars were aligning for us this season, giving us a chance to come back against both of those teams,” Pennridge junior Anna Croyle said. “They’re both really good teams and it just shows the character of our team, I think, to be able to come back and win in them.”

Last Saturday at Central Bucks East, Pennridge rolling to a 5-0 win over West and on a cold Wednesday night at Souderton it was a pair of goals by Croyle – one in each half – that enabled the Rams to hand District 1 champ Neshaminy its first defeat and advance with a 2-0 victory. “I was honestly excited to play West and when they (Neshaminy) were playing Conestoga, I wanted them to win to get another shot at them,” Pennridge junior Liv Grenda said. “Cause I think not just those two games as redemption but our whole season this year feels like a whole redemption round since last year we lost in the (state) quarterfinals and this year I feel like we’re coming back out, we’re coming stronger and better than ever and we want this so much.”

Central Dauphin denied Pennridge another rematch when the District 3 runner-up claimed a 2-0 win over Owen J. Roberts – which Pennridge beat twice this year – in the other semifinal at Hamburg Area High School. So two teams that share a nickname and colors (green and white) meet 4 p.m. Saturday at Eagle View Middle School in Mechanicsburg to decide the state crown.

“It’s a long season, you’re allowed to have hiccups and bumps in the road as long as you keep growing from them,” Pennridge coach Audrey Anderson said “I hate losing and I know my team hates losing, but sometimes you need that, refocus and figure out where you went wrong so you can better then next time around.

“I’m incredibly proud of these girls, how resilient they are and how much they wanted this. And we watched film, we saw where we were falling short and corrected some of those things.” It is the fourth time Pennridge has made the PIAA final, falling in 2011 and 2018 before taking the state title in 2020’S COVID-19 compressed campaign with a 1-0 overtime win over North Allegheny.

“It’s surreal,” Grenda said. “2020 was amazing and after we won that, even some people didn’t take it away from us but they’d say like it’s a shorter season so to come out here and not just prove it to them but to prove it to ourselves that we can make it back and we can go all the way. And we’re going to bring our best on Saturday.”

Pennridge defeated West twice in the regular season – 1-0 at home Sept. 9 and 3-0 at West Oct. 17. But the Suburban One League Colonial Division rivals’ third matchup in the district quarters went to the Bucks thanks to a 15-save effort from goalkeeper Jules Broskey, who also denied a penalty kick in the shootout West won 4-3 to upset Pennridge after the teams played to a 0-0 draw.

The loss was the first time the Rams were shutout since falling in last year’s state quarterfinals to Conestoga, which also went to PKs. But in their fourth meeting with the Bucks in this season’s PIAA quarter, the Rams did not struggle to put the ball in the net. Pennridge’s Anna Croyle (40) sends a shot into the net for a first-half goal against Neshaminy during their PIAA-4A semifinal on Wednesday, Nov. 16, 2022 at Souderton. (Mike Cabrey/MediaNews Group)

After goals from Jessie Moylan and Hailey Primwhere, Grenda converted on a penalty with 40 seconds before the break to put Pennridge up 3-0 at halftime. Joey Tomlinson and Kate Brashear added goals to send the Rams to the semis with a 5-0 win.

“Not that it helps to lose but I really feel like it’s an important step in the process,” Grenda said. “Cause losing to them we were able to learn more about ourselves, learn more about where we needed to grow as a team and personally and I feel like it helped us come out here tonight and put it all together. The pieces fit together, we were all in our best game and we were able to put two goals in the back of the net. And we’re going back to the state championship.”

Pennridge had won its first seven games of 2022 before its trip to Neshaminy Sept. 20, the matchup of eventual SOL division champs ending with the hosts handing the Rams a 2-1 defeat. But Wednesday night, Croyle staked Pennridge out to a 1-0 lead with 17:57 left in the first half by knocking a ball in after a free kick. The junior doubled the advantage on another restart, sending a loose ball in after a corner with 34:58 remaining and the Rams kept the scoreline intact to send them to the state final.

“When we played them they seemed like they wanted it more, they really pushed and I guess not that we weren’t ready but we just weren’t super-prepared for them,” Grenda said. “This game we came into it, we knew their strengths and areas of strength and we knew that it was going to be the team that wanted it more that was going to push through and come out with a win.

“So we were going to give everything to this game and especially with our only senior (Tomlinson), we didn’t want this to be our last game so that really helped push us.”

Girls Soccer: Episcopal gives its all, but SCH does just enough for PAISAA title
Owen J. Roberts ousted by Central Dauphin in PIAA 4A semifinal