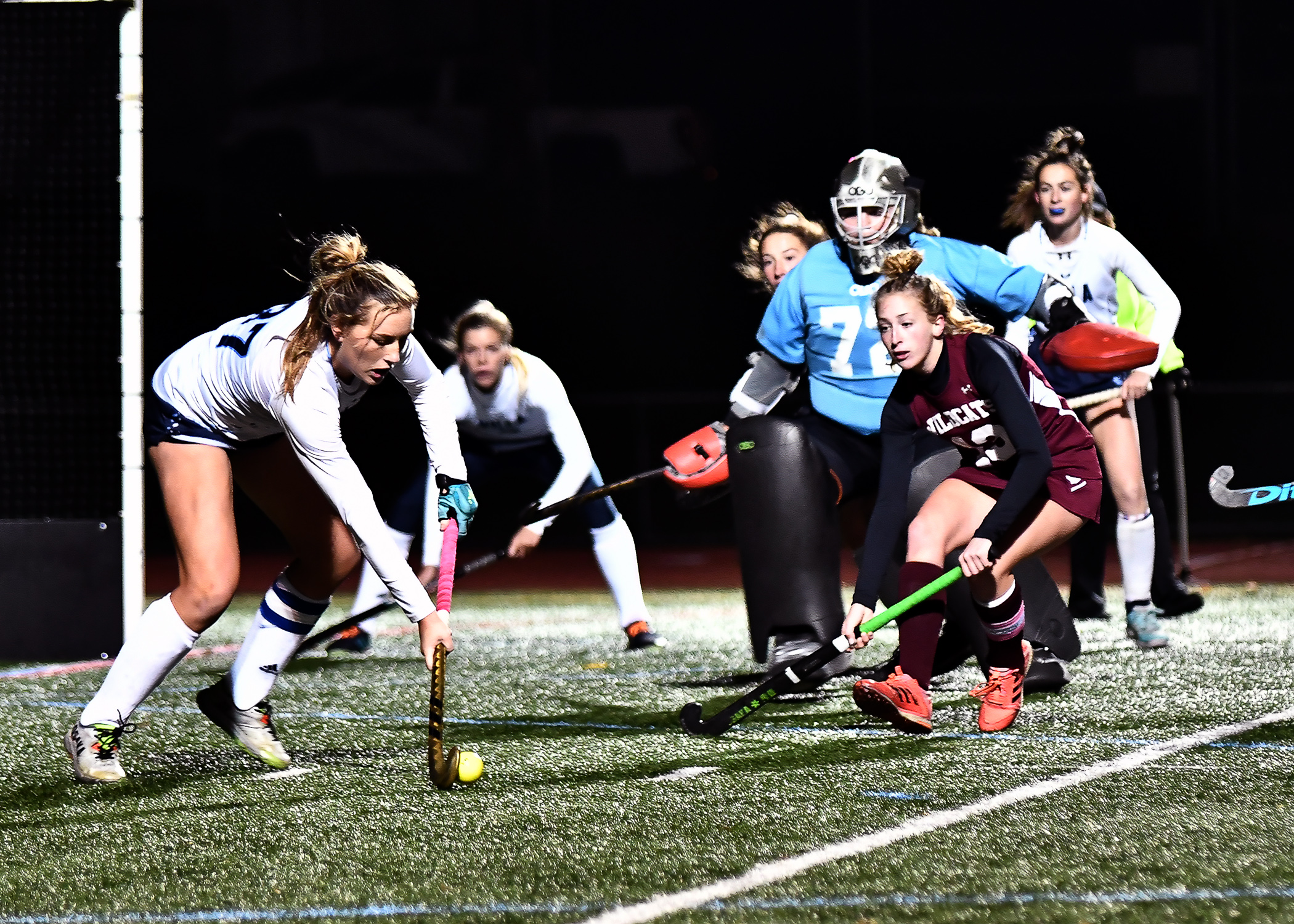 SHILLINGTON >> The Villa Maria Academy offense was as cold as the weather outside Wednesday night for the PIAA Class 2A field hockey semifinals at Governor Mifflin High School.

But even though the Hurricanes (18-7) struggled offensively, they still found themselves in a scoreless deadlock deep into the fourth period before Mechanicsburg (20-4-1) found the back of the cage with just under three minutes to go. Mechanicsburg held on for the 1-0 victory, and a spot in Saturday’s state finals. “We couldn’t buy a corner tonight,” said Villa coach Katie Evans. “Mechanicsburg did a great job defensively. They did a great job being in the line we were trying to hit to, and intercepted a lot of balls. They really packed the circle and made things difficult to capitalize on all the possessions we had inside the circle.”

The Hurricanes did a nice job defensively too, particularly on corner defense. The Wildcats held a huge margin in penalty corners, forcing 12 of the opportunities, to just one for Villa Maria.

But with that kind of advantage, it was only a matter of time before one slipped through.

Awarded a penalty corner with just over three minutes to play, the Wildcats passed it around in front of the cage, and took a few shots before Cam Standish broke through with the only goal Mechanicsburg would need.

“I couldn’t be more proud of this team,” said Evans. “This was supposed to be a rebuilding year, so to reach this stage of the state playoffs speaks volumes to the depth we have in this program.”

Back in September, the Hurricanes looked to be slumping through that rebuilding year. As late as Sept. 24, Villa was uncharacteristically under .500, and didn’t find themselves with a winning record until it was almost October.

Granted, most of those losses came to nationally-ranked teams on the Hurricanes’ brutal early season schedule, but a sub-.500 mark at any point in the season is generally not something seen at Villa.

“It is amazing the way this team battled through adversity in the beginning of the season,” said senior co-captain Brynna Hill, who will play collegiately at James Madison. “So many people doubted us, so to reach this level was amazing. It would have been great to keep going, but I still couldn’t be more proud of this team.” Once sitting with a record of 3-5, the Hurricanes went on a tear, winning 15 of their next 16 games, including reversing a pair regular season losses to Gwynedd Mercy, topping the Monarchs in the District 1 championship game.

“These last four years have been nothing short of incredible,” said Hill. “These girls have made me a better player and a better person. It really taught me to be a leader. We won Districts when I was a freshman and a sophomore, but this year was just amazing the way we came back from the rough start.”

Playing field hockey at Villa creates a bond among the athletes that won’t be broken.

“Playing at Villa was honestly a dream come true,” said senior co-captain Gia Whalen, an Iowa recruit. “Since I first started playing field hockey, I’ve wanted to play for Villa. It’s been a sisterhood beyond my expectations. And I feel incredibly lucky to have Katie as my coach. She’s the best coach I’ve had during my time in high school. This team has a lot of potential to be truly great next year, and I hope they come back next year and have an incredible season.” At Villa, it’s all about continuing the legacy.

“I feel really good about where this program is going,” said Evans. “These experiences will only help the younger players get better. I’m excited about the players going forward and the culture being shaped by the leadership we’ve had. The seniors did a great job leading. We always want to leave the jersey in a better place, and the seniors have done a terrific job of that.”