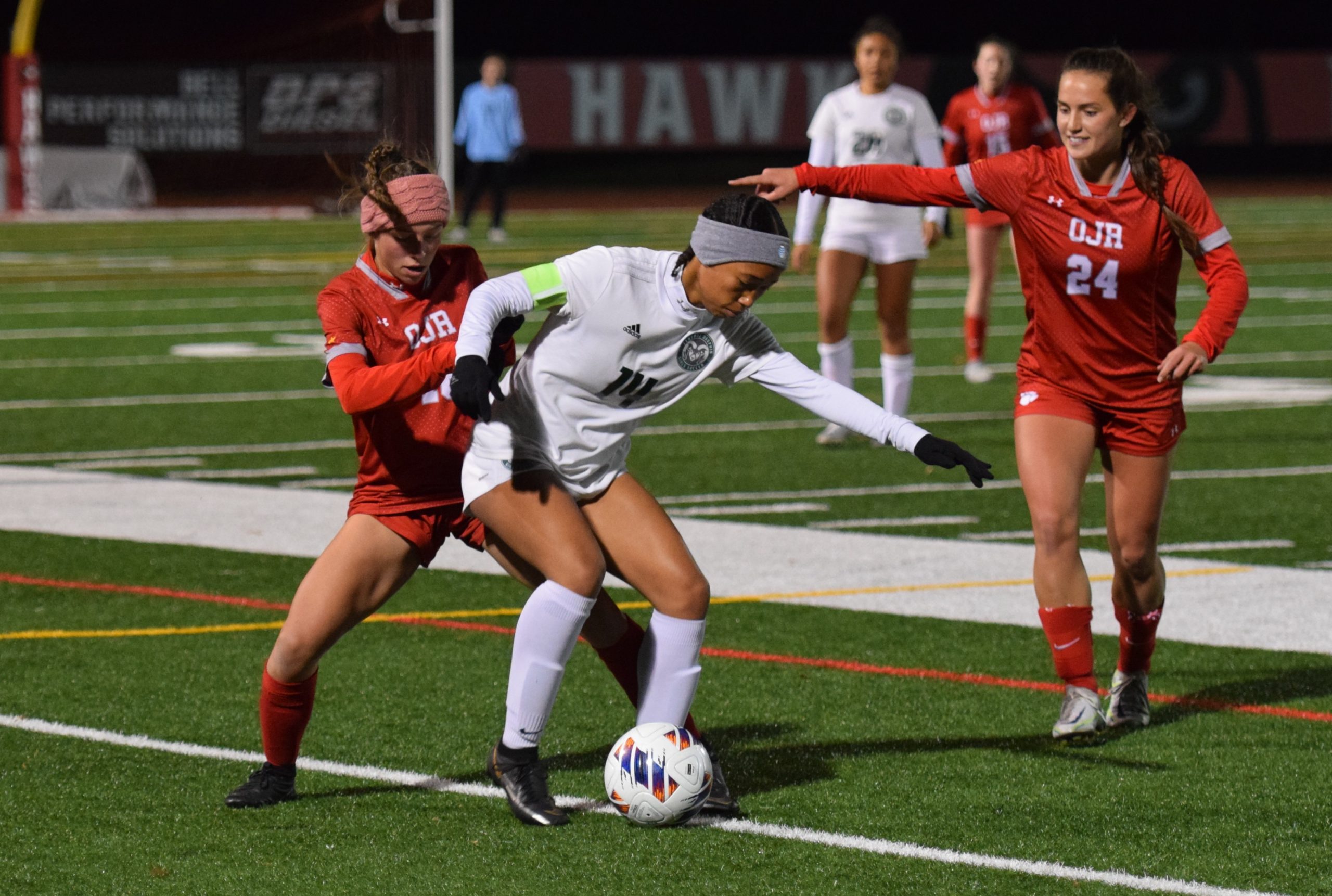 HAMBURG >> The Owen J. Roberts and Central Dauphin girls soccer teams were on their own redemption tours this fall.

Their 2021 seasons ended in similar fashion – at the feet of eventual state champion Moon – carrying into this fall equal parts regret and motivation, determined to fix the broken hearts of the past.

The Wildcats earned themselves a large measure of redemption last Saturday when it returned to Cumberland Valley’s Eagle View Middle School – the site of last fall’s season-ender – and prevailed over Peters Township to reach the PIAA semifinals for the first time since 2017.
Wednesday night, it was Central Dauphin’s turn.

Spurred on by last year’s loss in the state semifinals, District 3 runner-up Central Dauphin tallied goals in each half and put on a pressure-packed performance to defeat Owen J. Roberts 2-0 at Hamburg Area High School to qualify for the PIAA championship game.

Central Dauphin will meet another District 1 outfit, Pennridge, which defeated Neshaminy 2-0 in Wednesday’s other semifinal, in the final on Saturday, 4 p.m. at Cumberland Valley.

The game turned after an evenly-contested first 30 minutes when CD won the ball back in its half and transitioned on the attack with left back Hannah Hagy getting in an advanced position and driving forward before centering to sophomore Kayden Williams on the edge of the penalty area. Williams dribbled across the 18-yard line and passed to sophomore Katie Reynolds whose first-touch shot deflected off a Wildcats defender and looped into goal for the 1-0 lead at the 9:03 mark of the first half.

Williams later sealed it when she stole the ball off last defender Rachel Sbei and charged in on a breakaway that put the Rams up 2-0 with 22:46 remaining. CD center backs Isabella Zulli and AJ Renaldi worked excellently to limit OJR record scorer Alexa Vogelman, who had scored goals in four straight games, while senior Nia Chinapoo was a beast in the midfield, the head of a Rams’ unit that lives on making opponents uncomfortable.

“That’s been our playing style since the start of the season. That’s something I really hammered early on,” said CD first-year head coach Chris Jones. “You don’t always have to go in and win the ball right away, as long as you’re putting pressure on we will have something coming to take that second ball away. It’s been absolutely fantastic this year. Nia has been fantastic, Katie Reynolds has been awesome, Makenna (Kirk) has been a rockstar. That pressure has been something a lot of teams haven’t seen.”

Between Central Dauphin’s ferocity and an illness that held out six starters from practice Tuesday, it was not an easy day at the office for the Wildcats.

“We’ve always been a team with a lot of speed and athleticism and we finally found a team that in some parts of the field they’re faster than us,” said Vogelman. “Because of their quickness they were able to pressure the ball more than we’ve seen. I think we didn’t make a good enough adjustment on the offensive end. We tried to play to feet but it wasn’t working and then we didn’t find the through-balls. I think the gaps were there but we didn’t expose them.”

After dealing District 3 champion Manheim Township its first loss in the first round and beating Peters Township 2-1 last Saturday in the quarterfinals, OJR couldn’t unlock the Rams.

“I just don’t think they were as sharp as they’ve been the last two games, not taking anything away from Central Dauphin because they played very well,” said OJR head coach Joe Margusity. “I don’t think we played our smartest game. It was the definition of insanity: kick the ball to Lex (Vogelman) and hopefully she could do something. That wasn’t working so we had to play through the midfield and we didn’t make that adjustment.” Even if the attack wasn’t humming, the Wildcats felt good about limiting the Rams until Reynolds’ big moment.

“Not to downplay them, but that first goal was a little fluky coming off one of our defenders,” said OJR senior Gabbi Koury. “After that I think our energy dropped because up to that point we were playing really well against them. It was a nice, competitive game. That completely changed the momentum.”

The Wildcats never recovered, seeing their season conclude with a 19-8 record. Last year OJR was a juggernaut in the regular season, won the PAC title and reached the District 1 final. It wasn’t as straight-forward this fall, yet the last team standing was the current ‘Cats.

“I’m going to miss the seniors. It’s been quite a four-year run from them,” said Margusity. “They genuinely cared for each other. They’ve been on so many different sports teams together since elementary school. And you have probably the most dynamic and athletic class since I’ve been at Owen J. It’s going to be hard replacing them.”

Amid its flaws, Vogelman found beauty in the Wildcats’ season.

“I would never change the journey we had this year,” she said. “We were a team that shocked people. We didn’t show up in the regular season and we didn’t show up in the PACs, but those moments helped us to learn and helped us get here. That’s part of the reason why we were able to get a step further, because we learned from those losses and built from them. We didn’t obviously get to the end goal, but there was something to be proud of and that’s the grit and toughness we’ve shown and the ability to play through adversity.