Girls Soccer: Episcopal gives its all, but SCH does just enough for PAISAA title 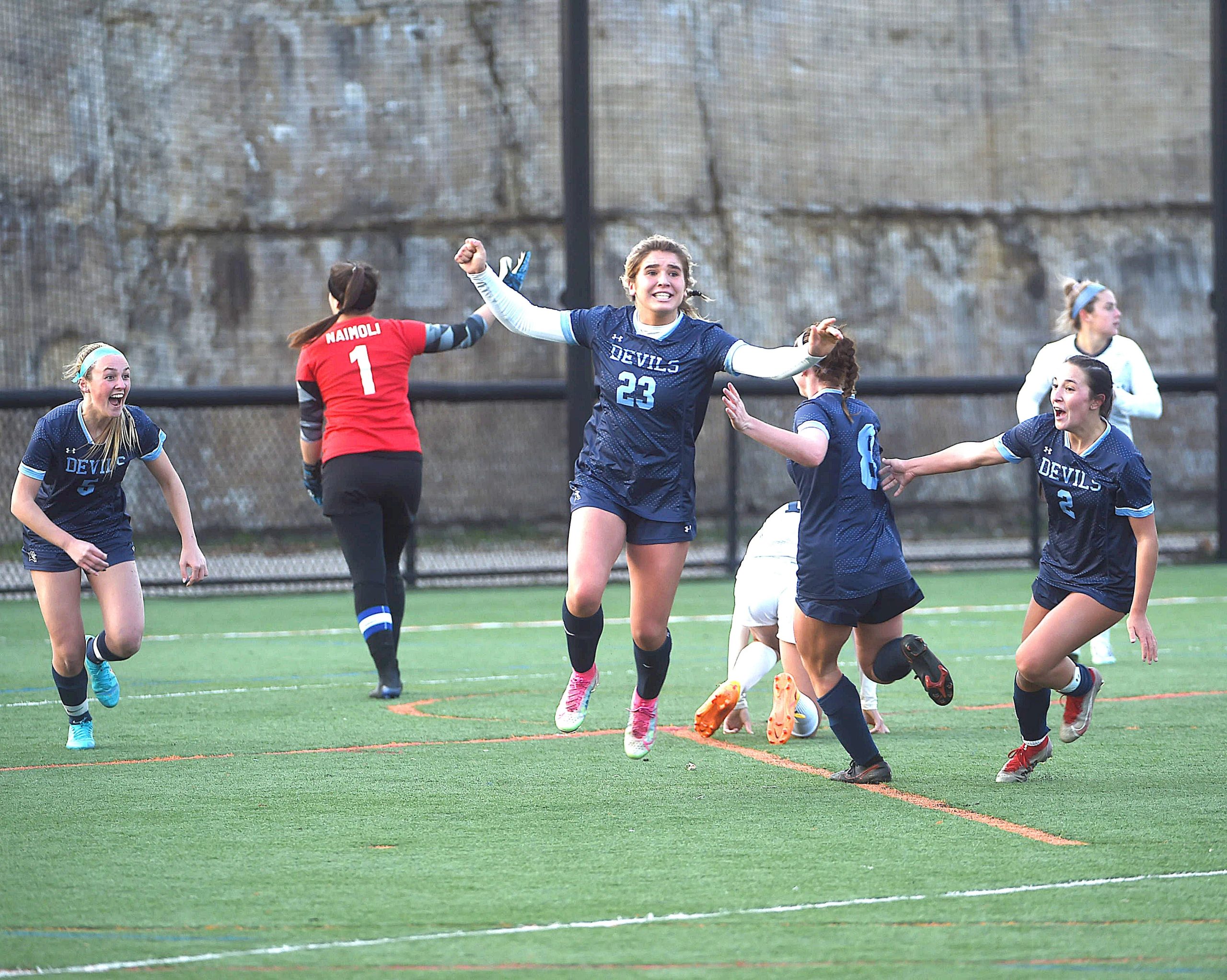 CONSHOHOCKEN — Lainey McGonagle dropped to the turf in tears at the Proving Grounds Wednesday afternoon. Episcopal Academy’s central midfield pinball had nothing left to give, after 80 minutes of combat in the PAISAA girls soccer final against Springside Chestnut Hill.

In so many dimensions, McGonagle and her EA teammates felt they’d done enough to break through against a program that has become a nemesis. They’d created moments of danger for the SCH backline. They’d won, with the junior McGonagle throwing herself into tackle after tackle, enough individual midfield duels to tamp down the influence of SCH’s Maryland-bound playmaker Lisa McIntyre. They’d gotten sensational saves from Maya Naimoli.

But sometimes even that isn’t enough against a program as prolific as Springside Chestnut Hill, one that has lost just once in the last three seasons. And in those crucial moments where a game hangs in the balance, the Blue Devils seem to find the right ball to the right player. Wednesday, that was Abby Kenkelen, alert to a momentary breakdown in the EA backline in the 70th minute, riding the offside line and taking a feed from Alex Reilly for the only goal of a 1-0 victory and a second straight PAISAA title.

“I feel like we’re just as good as SCH,” McGonagle said. “If you go in with a bad mentality, you’re going to have a bad outcome. But if you go in with a good mentality and you have grit and you want to beat the team, you will. And it just didn’t go in our favor today.”

Springside Chestnut Hill caps a 19-1-3 season, including a second straight Inter-Ac title. EA may not be alone in feeling aggrieved by the Blue Devils’ recent dominance, but they’ve come the closest to knocking them off their pedestal. EA accounted for one of the draws this season, a 1-1 decision Oct. 25, after losing in overtime, 1-0 on a McIntyre goal. Those were the only blemishes for EA (17-3-1) in a 10-1-1 Inter-Ac slate.

Springside Chestnut Hill’s loss came to Conestoga, 1-0; it also drew with Agnes Irwin in the league, on the back of consecutive unbeaten campaigns, albeit a shortened five-game season in 2020. The current seniors, as freshman, lived through the relative hardships of an 18-2 season.

That didn’t deter McGonagle and company Wednesday, a fearlessness that created an exciting, back-and-forth affair. For most of the first 70 minutes, the goalies took center stage.

Naimoli, an Ohio State signee, made six saves. The best came in the 33rd minute, at full stretch to ward off a drive by Kenkelen.

“I think it’s frustrating because of the good saves she does make,” Kenkelen said of Naimoli. “But I think placing it low in the corner was the way to go because we know she’s good in the air. Those shots from outside the box in the air aren’t really going to do it in this game.”

Naimoli added a point-blank denial of Bella Brown a minute after the goal to keep EA in it. But Kenkelen filed away the knowledge of Naimoli’s strengths for when she got another chance.

The EA midfield, led by McGonagle, Quinn Whitaker and Grace McHugh, put out fires time and again. Coupled with outstanding days from outside backs Avery Le and Alexa Cohen, they minimized the danger presented by McIntyre and Binghamton-bound Brown. One sequence in the 16th minute – when McHugh threw her body at a Reilly shot, then Cohen slid in to tackle the ball away in a dive that had to be inch-perfect in the box – was telling. Episcopal Academy goalie Maya Naimoli makes a save on a shot by Springside Chestnut Hill’s Abby Kenkelen in the second half of the PAISAA final Wednesday afternoon. (PETE BANNAN-MNG)

Offensively, EA had a plan: It wanted to play out of the back and get the ball up the field quickly to unbalance SCH before it could set up its defensive structure. With striker Maya Bright playing decoy to drag SCH’s Abby Fitzmaurice out of the middle and midfielders aiming passes at slivers of space between a high backline and goalie Ella Stratz, the opportunities existed but required precision.

“I tried to facilitate for other people because I know I may be a target for them,” Bright said. “I’m trying to be unselfish and give the other people the ball to score.”

They also needed a finish, which didn’t come. Stratz made sure of that just nine minutes in, smothering an attempt by Kate Dente inside the box when Bright had played her in.

Bright did so again in the 56th, squaring across the box to Dente, who tried a shot across the grain that Stratz dove to paddle away. Stratz had stood tall moments earlier when Bright found Whitaker in space, though the sophomore midfielder didn’t get all of it. Stratz watched gratefully as Le’s side-volleyed effort off a third straight corner kick in the 58th looped just over the bar.

That spree of chances illustrated the threat EA posed. But its inability to convert left the door open for a team that doesn’t need a second invitation. Needing one moment to decide matters, McIntyre started it with a run from deep in midfield. Kenkelen, a Brandeis commit, finished it, to seal the optimal ending for a class of seniors who had more seasons at Chestnut Hill than losses.

“It’s amazing,” she said. “I sometimes can’t believe it. But I think it’s just everyone on this team is amazing, and we pick each other up. There’s lots of individually good players on this team, but we work together well and we have great chemistry as a team.”