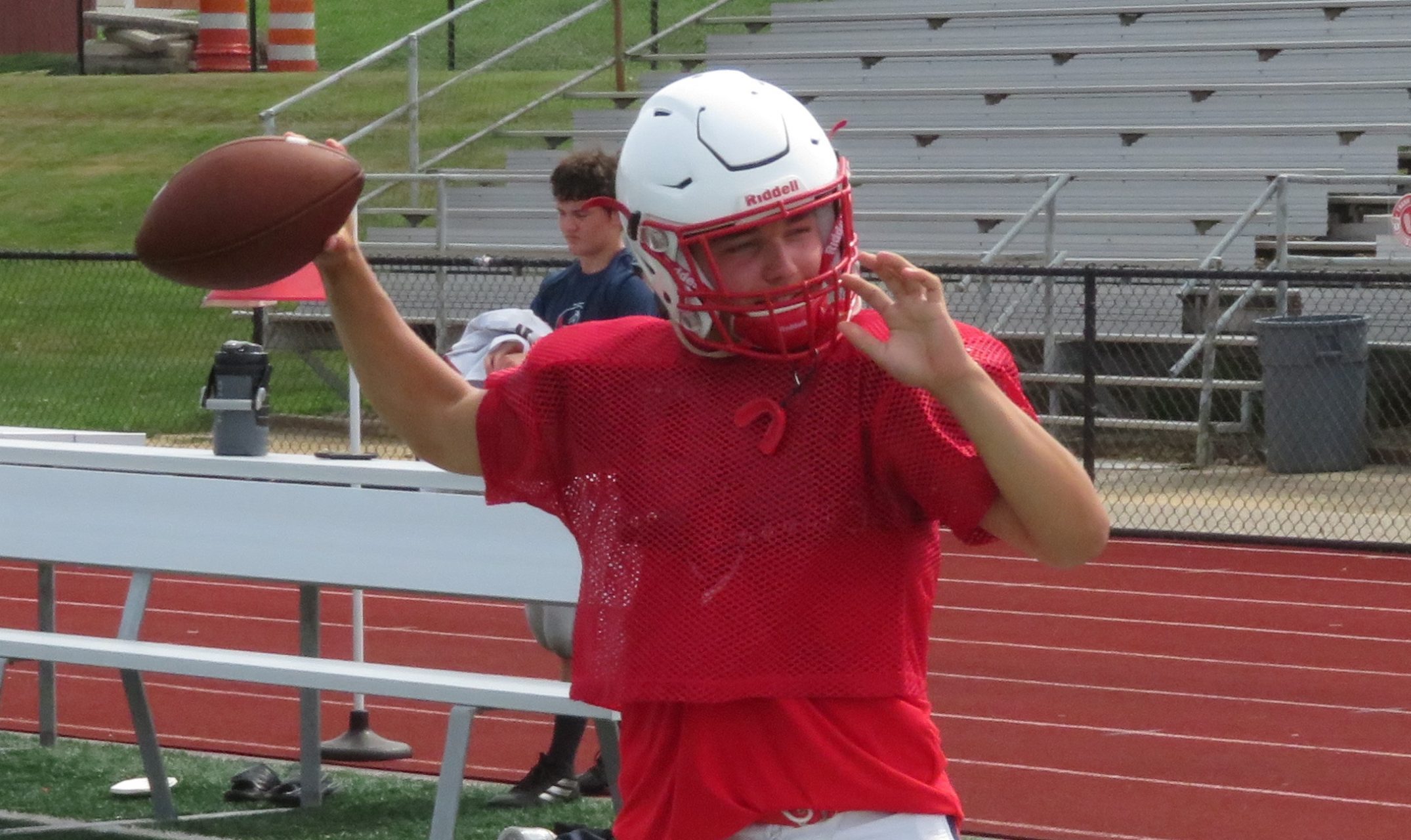 WHITEMARSH >> In the District 1-5A quarterfinals last season, Plymouth Whitemarsh faced a 4th-and-7 in the final minute while trailing Upper Dublin by eight points. Quarterback Aiden O’Brien dropped back to pass. He broke away from a sack, avoided another tackle at the line of scrimmage and fell forward through contact to pick up the first down.

Tommy Hannon scored touchdown on the next play and O’Brien ran for the two-point conversion to tie the game. After the defense got a stop on the first possession of overtime, Hannon barreled into the end zone to send the Colonials to the district semifinals.

That toughness shown down the stretch is the hallmark of Plymouth Whitemarsh’s program and seniors O’Brien and Hannon are both back this fall to set the tone on both sides of the ball.

“Those two are as tough as it gets mentally and physically,” PW coach Dan Chang said. “Not a lot is going to bring them down. That’s how we set our whole tone for our offense – we’re going to keep grinding it out until you make a mistake, you get complacent and then we’re going to hit one big.

“Those guys returning are great communicators for us, setting us up defensively in the right calls, the right spots. They’re both physical, good tacklers.”

O’Brien is entering his second season as the starting quarterback, but now he’s much more comfortable in the position. Last season, he switched from running back to quarterback in the second week of camp. This year, he spent the offseason throwing in 7-on-7 work to develop that aspect of his game.

“Footwork was a big thing,” O’Brien said of his offseason improvements. “Timing, reads, all with the passing stuff. As far as everything else – lifting, getting bigger, footwork, agility.”

“He is lightyears ahead of where we were with him last year,” Chang said. “He didn’t take one snap last year at any 7-on-7 at quarterback or anything like that. His throwing ability and seeing the coverage, reading the coverage and putting the ball out on time is way better. I expect him to be much more efficient throwing the ball and then his run game – he’s able to change things on the field. He knows what we’re looking for. Technique-wise he’s excellent. I’m excited for him to be our leader on offense again.”

On the defensive side, O’Brien is moving from linebacker to more of a hybrid linebacker-safety position. Listed at 5-foot-9, 160-pounds, O’Brien’s built to cover more space at the hash and can still drop into the box when needed.

Hannon was a first team All-Suburban One League American Conference linebacker last season as a junior. This offseason he worked on reading the guards in the running game and the routes in the passing game to continue to improve.

“Tommy is one of the toughest guys I know,” O’Brien said of his classmate. “You have to come with a different kind of mindset when you play us. That’s what we try to do in practice… We try to get practices up-beat, hype, simulate games and just simulating that toughness and energy that we play with.”

Hannon expects a bigger role on offense this year. The running back proved he can handle the workload late last season when some injuries ahead of him on the depth chart led to more playing time. In the district quarterfinal against Upper Dublin he ran for 99 yards and three touchdowns.

“He’s probably one of our best runners,” Chang said. “He’s definitely going to get the ball as much as he can. We have another guy there Greg Feinberg who’s just as good as Tommy is, so it’s a nice little situation to have.”

Plymouth Whitemarsh’s physicality will go a long way in determining how this season goes. The players remember how it felt when they lost to West Chester Rustin in the district semifinals and hope to accomplish more this fall.

“I was definitely thinking about the Rustin game,” Hannon said of his fuel for the offseason. “I know a lot of the returning players were. That’s our goal to get back there and get further this season.”

Luke Winterbottom >> Winterbottom is a big, strong and fast player who figures to see a lot of carries this season from the veer offense’s slot position. The junior also has good hands and can be a receiving threat out of the backfield.

Jared Kolsun >> Kolsun is a physical and athletic player with two years of starting experience at the defensive end position. The senior can do everything from getting after the quarterback to defending the run and dropping into coverage.