PIAA Class 3A Boys Lacrosse: Smothering defense has Radnor back in state final 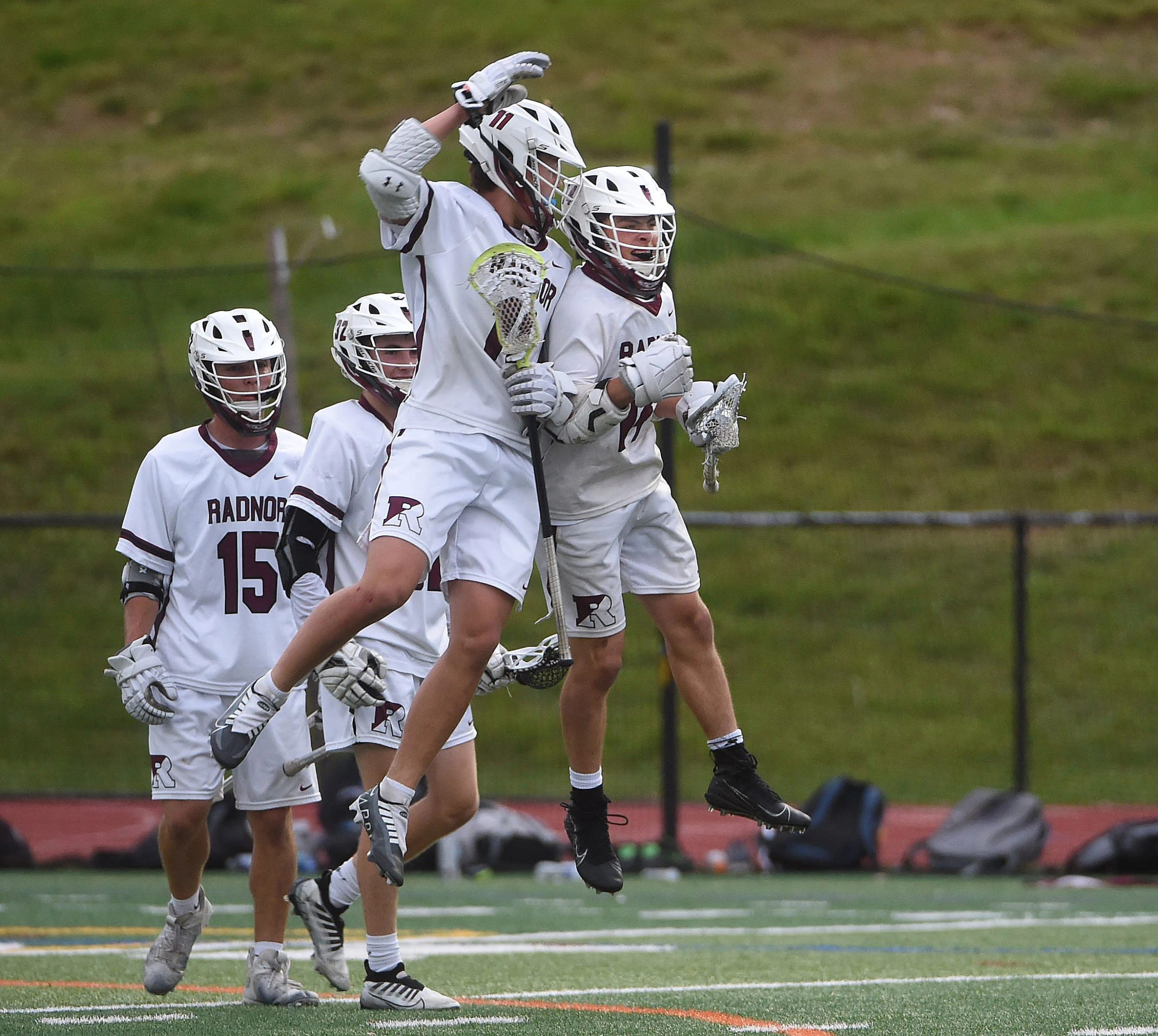 Radnor's Colin French, left, celebrates with Giordan Ramondo after Ramondo took a face-off and scored in the second quarter against Springfield on Tuesday in the PIAA Class 3A semifinals. (PETE BANNAN - DAILY TIMES)

CONCORD — It would be easy to point to a three-goal, second-quarter outburst in a span of 66 seconds that has Radnor back in the PIAA Class 3A championship game for the second year in a row.

A two-goal surge in 43 seconds in the third period didn’t hurt, either.

But the real reason the Raptors will have a chance to defend the title they won a year ago was the smothering defense they played in an 8-2 semifinal victory over Springfield Thursday night at Garnet Valley’s Moe DeFrank Stadium.

The Raptors (23-2) stymied the Cougars at every turn to earn a date with Garnet Valley Saturday in the final game of a championship quadruple-header at West Chester East’s Zimmerman Stadium. The game is slated to start at 4:30 p.m. The Jaguars (19-6), the fifth-place team out of District 1, blew out District 12 runnerup St. Joseph’s Prep, 20-9, in the other semifinal.

Radnor allowed one goal in the second period and one late in the fourth quarter to beat the Cougars (19-5) for the third time this season and the fourth time over the last two years.

“We knew we had a very good transition team in Springfield coming in,” Radnor senior defender Will Gallagher said. “Our focus was to limit their transition and try to play six-on-six and try and play good team defense.”

The Raptors were able to do that. Matt Dickinson scored in the second quarter for Springfield and Jimmy Kennedy found the back of the cage late in the fourth quarter to end a seven-goal run by the Raptors. That was it for the Springfield offense.

Goalie Nate Brown anchored the back of that unit. What the guys in front of him did not stop, he did with 11 saves.

“It’s just being patient, trusting in our whole system,” Gallagher said. “We always say we play as a seven-man unit and we did that tonight. The other thing is to get the ball off the ground and get the ball to our offense.”

The Raptors did that, too. The defense caused several turnovers that led to offensive opportunities that Radnor capitalized on. Once again it was Ryan Goldstein who led the way with two goals and two assists. Nick Lucchesi pitched in with two goals, too.

It was a defensive battle until Radnor erupted late to take a 4-1 lead into halftime. The Raptors scored three times in a 1:16 span to break a 1-1 deadlock.

Both teams had chances in the first quarter but neither could cash in. Springfield had the best chance with about five minutes left when Brett Doherty worked his way to the cage but Brown was equal to the task.

Radnor continued to press the attack despite misfiring on five shots in the first and that pressure finally paid off. After a turnover, Goldstein found Colin French all alone in front of the cage and French rifled a shot past Springfield goalie Ethan Johnson to give the Raptors a 1-0 lead with 9:41 to play in the second period.

It didn’t take long for Springfield to get the equalizer. Dickinson got the Cougars on the board with 6:34 to play in the half.

That’s when Radnor broke it open. Lucchesi broke the deadlock with 2:19 left in the second quarter. Giordan Ramondo tallied an unassisted goal six seconds later and Ryan Goldstein made it 4-1 only 1:10 after Ramondo’s goal.

“That was a credit to our defense,” Goldstein said. “We got easy transition goals. The defense got us the ball and that led to our offense being more in flow.”

The Raptors used another pair of goals in a short span to extend their lead to 6-1 heading into the fourth quarter. Tommy Deshan converted a pass from Goldstein with 6:20 to play in the third period and then Goldstein netted his second goal 43 seconds later.

From that point, the Raptors played keepaway. Radnor was deliberate in its attack and chewed 2:39 off the clock on its first possession before Nick Lucchesi fired a rocket past Johnson for his second goal of the game and a 7-1 lead. Will Kaplan converted a pass from Nate Lucchesi to close out the scoring for the Raptors.

Jimmy Kennedy finally ended the bleeding for the Cougars when he converted a pass from Ryan O’Connor with 3:12 to play in the game.

“Our defense was great,” Nick Lucchesi said. “It’s super easy to lean on them to give us those opportunities. They did it all night for us. We’re super grateful for that.”