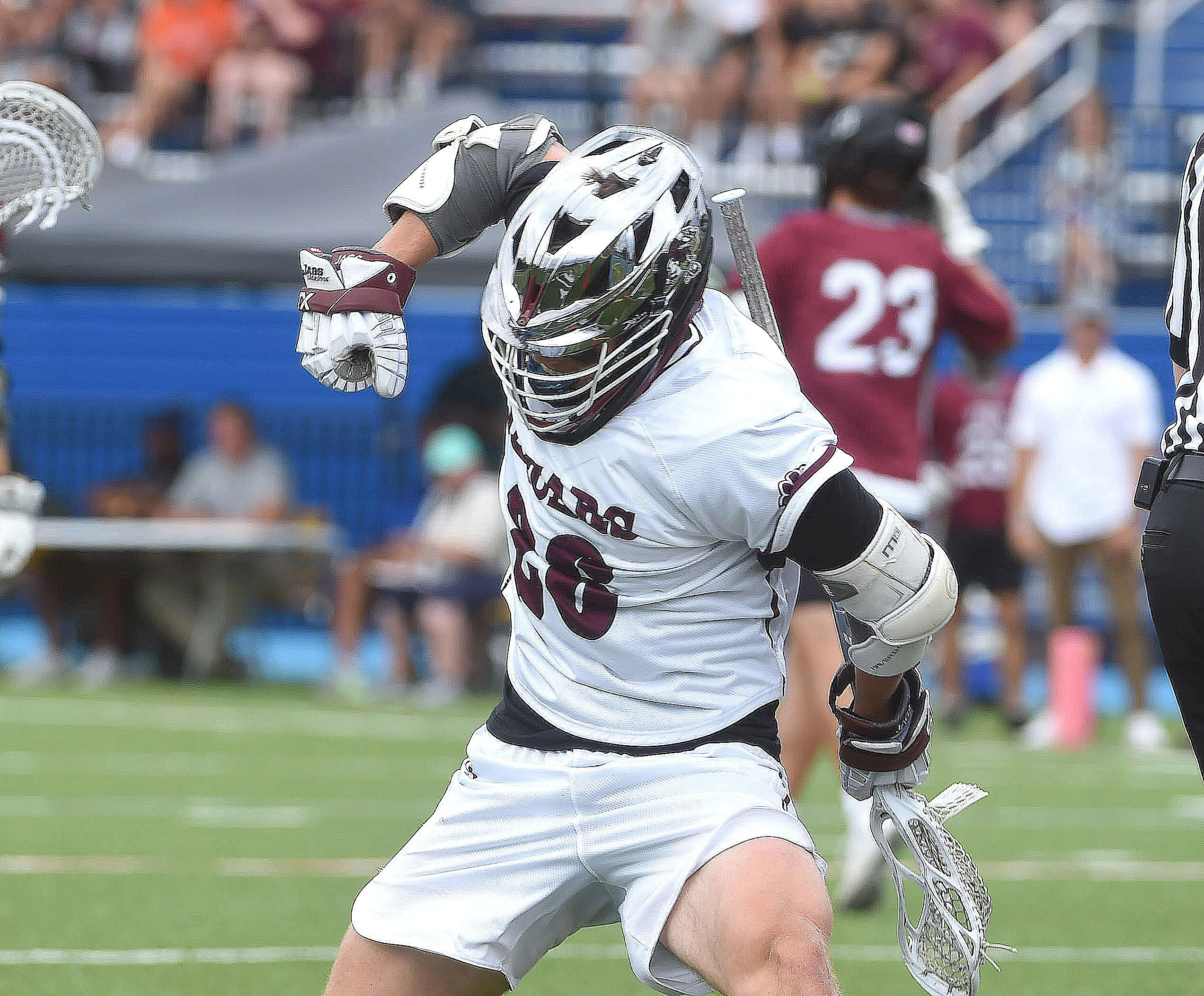 Garnet Valley's Max Busenkell pumps himself up after scoring in the first half Tuesday in a PIAA Class 3A semifinal win over St. Joseph's Prep. (Pete Bannan - MediaNews Group)

SPRINGFIELD — When Sam DiTrolio is scoring goals, you know Garnet Valley is having a good time

The faceoff specialist was dominant from the “X” in Tuesday’s PIAA Class 3A semifinal game against St. Joseph’s Prep. You know, a typical DiTrolio effort. But goals? Not really his thing.

When the three-sport standout, who earned first-team All-Delco in football and wrestling, gets out in open space and fires missiles past a helpless goalie however, watch out. And his teammates feed off his energy.

A rare sight: DiTrolio scored two goals as Garnet Valley punched its ticket to the Class 3A state boys lacrosse final for the first time with a 20-9 shellacking of the mighty Prep. The Jaguars will play top Central League foe Radnor in the state championship game Saturday.

Garnet Valley’s Luke Mingioni, left, and Joey Halloran celebrate after scoring in the first half of the PIAA Class 3A semifinal against St. Joseph’s Prep at Springfield High School Tuesday. (PETE BANNAN-DAILY TIMES)

“I think he only had one goal the rest of the season and he put up two today,” Danny Husain, who played lights out on defense, said of DiTrolio. “It was really exciting to see Sam pop off like that.”

Maybe it’s his shaggy beard and flowing red locks or lunch-pail attitude DiTrolio brings that is so infectious. Either way he is happy to be part of a team that is one win away from program history.

The Jaguars were relentless with their defensive pressure right out of the chute. Husain and Cory Urso, in particular, were major factors in forcing the Hawks to make a slew of early mistakes that cost them at the other end of the field.

GV raced out to a 6-1 advantage after 12 minutes. Max Busenkell scored with 1.5 seconds left on the clock and the Hawks were wearing the collective look of a defeated team after one quarter.

That Jags tend to do that against teams they outwork.

“It’s what wins games. We have a chip on our shoulder,” DiTrolio said. “You know, we’re not always going to be the most talented team; we have some great talent on the team, obviously, but us having that extra grit and that fight to get the ground ball every time is what carries us and it helps us win games.”

Busenkell tallied a game-high six goals, but it was Andrew Goldt who set the tone with back-to-back goals in the first period. Goldt found the back of the net for the third time 1:32 into the second quarter to give Garnet a commanding 7-1 lead.

It only got worse for Prep.

Garnet Valley’s Drew Goldt scores one of his three goals in the first half against St. Joseph’s Prep Tuesday. The Jaguars won the PIAA Class 3A semifinal at Springfield, 20-9. (PETE BANNAN-DAILY TIMES)

Ryan Nealon stole a lazy pass around midfield and darted the other way to score Garnet’s eighth goal of the first half. Fourteen seconds later, long pole Sean Gallagher scored immediately off a DiTrolio faceoff win to make it a 9-1 lead. Zach Myers scored off another turnover with 7:42 to go before intermission and Nealon notched his second of the period with 3:19 left. GV led 11-2 at the break.

“We kept getting a lot of quick goals back to back. Every time they tried to get any momentum we would take it back,” Husain said. “It’s nice to beat them again. They beat us in football (in the PIAA Class 6A semifinals) and we had a close game with them this year in lacrosse (7-6 Prep win in overtime). To beat a school like St. Joe’s Prep is super exciting.”

This is the second year in a row that Garnet Valley ended Prep’s season. Last year the Jags pulled out a 12-9 victory in the state quarterfinals. GV hadn’t advanced to the final until this year. The seniors on the team experienced heartbreaking losses in the semifinal round in 2019 and 2021.

“It feels amazing because I think we all remember the pain of losing this game two times before,” Busenkell said. “To finally not feel that is something we’ve always wanted since our freshman year. We are excited to go to the finals.”

In the third quarter, as the Hawks showed a faint pulse, GV coach Frank Urso was livid at the officials as he called a timeout, throwing his hat on the ground and gesticulating. Someone on the sideline said the reaction reminded them of the old dust-ups former baseball manager Billy Martin had with umpires back in the day. Google him, kids.

Sure enough the Jaguars scored a pair of goals after the timeout and never looked back.

“We want to win as much as he wants us to win,” DiTrolio said of Urso. “And that’s a great feeling.”