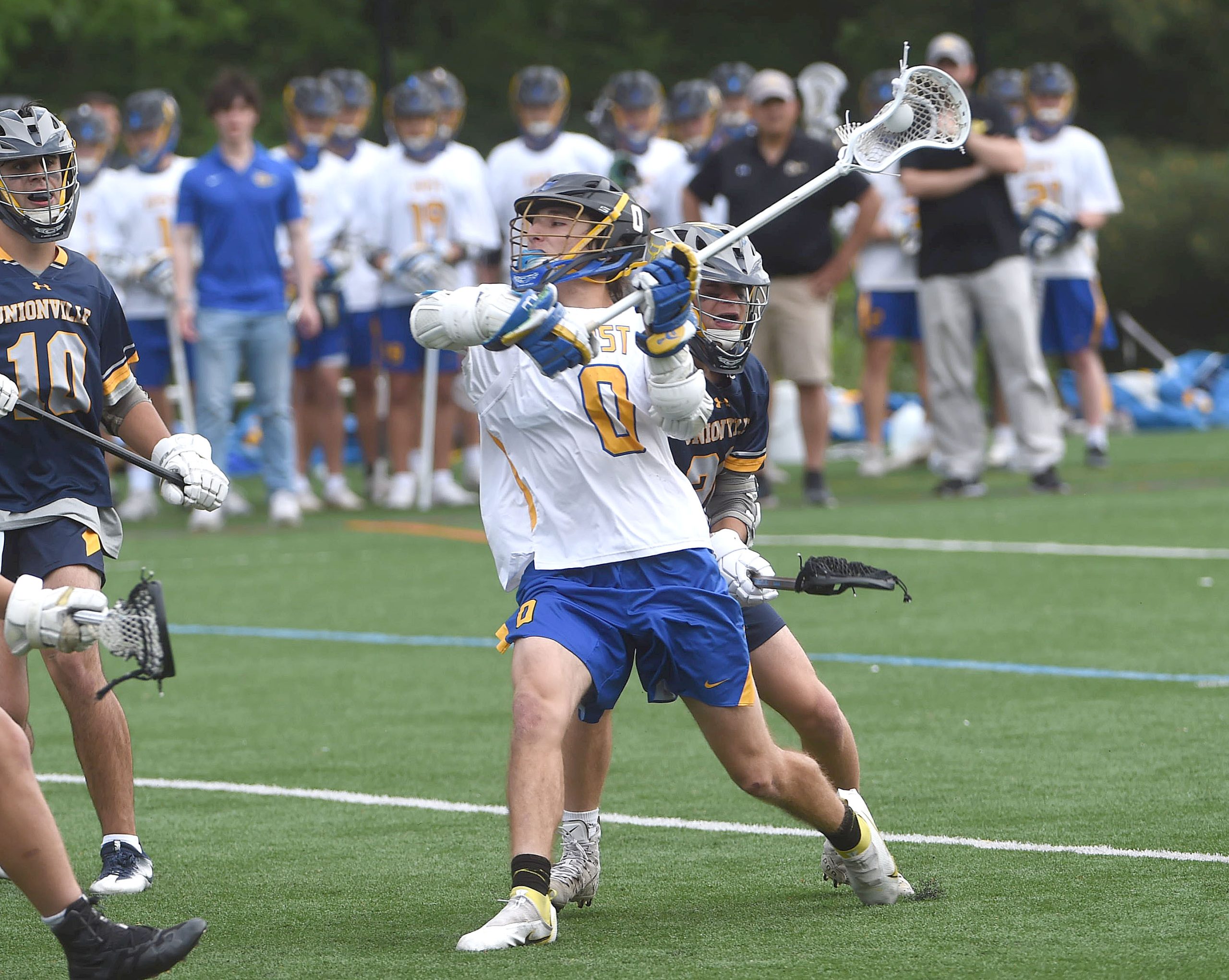 UWCHLAN >> After opening a two goal lead with just over two minutes left in regulation, the Unionville student section started chanting: ‘It’s all over.’ But if anybody should understand that anything is possible in this boys’ lacrosse season, it would be the Longhorn faithful, who’ve watched in delight Unionville’s shocking Cinderella run to the District 1 3A Semifinal.

It wasn’t over, of course, as host Downingtown East scored two goals in the final 62 seconds to send it into overtime, with the equalizer coming with 12.7 seconds on the clock. And then the second-seeded Cougars completed a wild comeback when senior Alystair Hemberger notched the winner just one minute, 20 seconds into the extra session, giving East a dizzyingly crazy 8-7 triumph Tuesday.

“I was just telling (Unionville) coach (Steve) Holmes that this game was worth the price of admission,” said Cougars’ head coach Joe Horvath. “So whatever was paid to get in, everybody sure got their money’s worth.”

Now 19-2 overall, East advances to the Thursday’s district final, where they will face top-seeded Radnor. The Cougars fell 11-7 to Radnor, the defending state champs, during the regular season. East has already avenged its only other loss by blasting Spring-Ford earlier in the playoffs.

“We’ve been wanting to win a district title in what seems like forever, and we’d like to beat no team more than Radnor,” said Hemberger, who finished with three goals on Tuesday.

It was a stinging setback for red-hot Unionville, who is seeded 19th, was coming off three road wins in the playoffs, and never trailed in regulation. Now 13-9 overall, the ’Horns will play Springfield (Delco) in the third place game Thursday, but have already qualified for the PIAA Tournament.

“This will hurt for a day, but we have to come back to practice Wednesday and get ready for Thursday,” Holmes said. “This is unprecedented (territory) for us, but with the way we are playing now, there is no point stopping now. We are going to keep pushing it.”

And with a goaltender like Nico Kotch leading the way, who would want to take on Unionville right now in a do-or-die scenario? The senior stopped 14 of 22 shots on goal that East sent his way.

“People forget that Unionville is extremely well coached, they have a number of athletes and they have a great interest in lacrosse which is evident by their numbers,” Horvath said. “If you underestimate them, you are going to pay for it.”

According to Horvath, that is what happened in the opening quarter. The Longhorns scored three times in the first four minutes of action, which equals the offensive output against the Cougars in the full 48 minutes of a 6-3 loss in the regular season finale.

“It was an absolutely terrible first quarter. We weren’t awake and we underestimated our opponent,” Horvath said.

“That start was unlike us,” Holmes added. “So it was different playing with the lead, but we kept fighting and playing like we were down.”

By the half, it was 4-2, and the Unionville lead could have been even larger if not for a shot off the crossbar (by Brayton Bellafiore), another off the post, and a shot that was actually saved by East defender Liam Quinn.

“It was definitely a slow start, but I wasn’t really worried because we had time left,” said junior midfielder Bo Horvath, the coach’s son. “I was pretty confident we were going to eventually turn it up. We just had to stay calm.”

Senior Luc Spano notched his third goal of the day early in the second half for the Longhorns, and after the Cougars sliced the margin to one early in the fourth, sophomore Owen Kupsey converted a man-up situation to make it 6-4 with 8:52 remaining.

East received a big boost on offense down the stretch with the reemergence of Dylan McMahon, who had served a lengthy suspension after engaging the crowd the last time these two teams met. The senior attacker came up with a loose ball behind the Unionville cage and got it to teammate Bryson Kolinsky to make it 6-5, but the ’Horns Kevin Carson scored to reestablish a two-goal cushion at the 2:05 mark.

That set the stage for the comeback, which started when McMahon found Hemberger for a critical goal with 1:02 on the clock. After Horvath won the ensuing faceoff, Kolinsky somehow came up with possession after his shot was stopped by Kotch, and he got the ball to McMahon, who tied it up with 12.7 to go in regulation.

“(McMahon) is dealing with challenges, but he understands his role, he plays that role well and he is clearly a difference maker when he is in there and focused for us,” Joe Horvath said.

In the OT, Horvath won another big face off, and once again McMahon set up Hemberger for the game-winner.

“The pressure was building all through the fourth quarter,” Hemberger said. “So when we finally tied it, we felt a little breathing room.

“(The winning goal) was in transition, I had some open space and I just came over the top and shot it.”

McMahon only played in the second half, but finished with two goals and three assists. And, out of desperation, Horvath was moved to the faceoff circle late regulation, and wound up winning six of seven.

“We kind of needed somebody to go out there and scrap,” Bo Horvath said.

“Bo is a hustler and he spends the most minutes on the field for us, and I am proud of him for that,” Joe Horvath said. “He picked up a loose end for us.

“We needed face off wins and turnovers in (Unionville’s) zone late in regulation, and we got some.”

Kevin Nowoswiat had two goals for Unionville and Carson finished with a goal and an assist.

“It’s been an unbelievable ride,” Holmes acknowledged. “I told the guys that it’s all about the ride, not always about the end result.

“They can be proud that they’ve kind of shocked a lot of people and they’ve exceeded my own expectations. They are playing lacrosse at a level that no other team at our school has ever played.”

And Hemberger summed it up best for East: “We’ve battled adversity all season and we did that again today.”