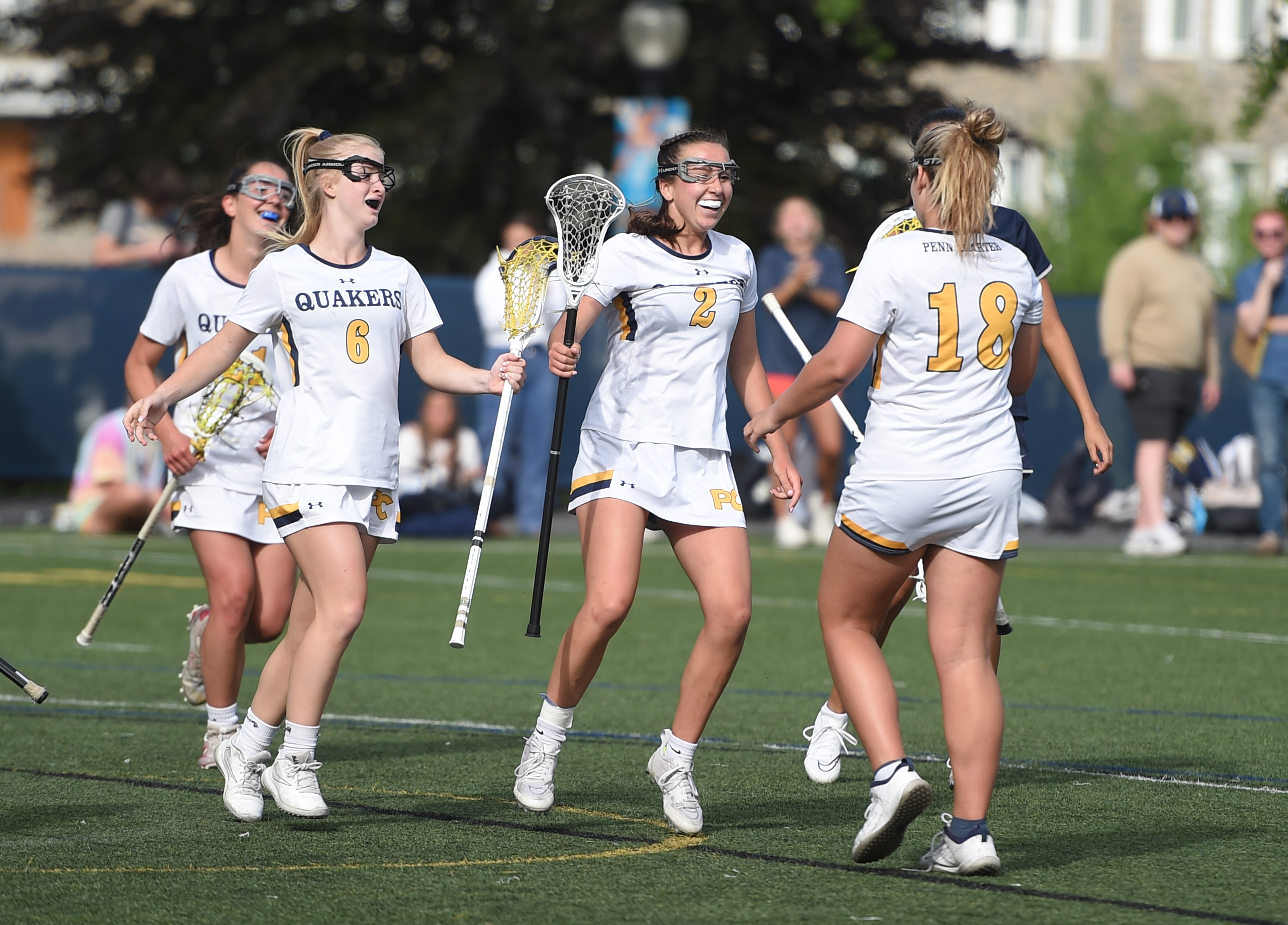 After letting an early four-goal lead slip away, No. 1 Penn Charter built another four-goal advantage against No. 4 Hill School in the second half of Tuesday’s PAISAA semifinal.

The Quakers made sure to learn from their first-half mistakes.

Penn Charter thwarted another Hill comeback attempt by closing the game with eight straight goals for a 16-6 semifinal victory.

“You just gotta keep your head up, know that we have it and trust each other,” Penn Charter’s Darcy Felter said.

“It was just, we know what we’re doing, we just need to put it all together. We just weren’t making our shots or connecting our passes. It was just finishing the play, winning some draws.”

Penn Charter’s Maddie Shoup, who led all scorers with seven goals, scored twice and Charlotte Hodgson added another goal to put the Quakers up 3-0 less than two minutes into the game. Felter extended the lead to 4-0 at the 23:08 mark.

The rout appeared to be on.

After figuring out its early face-off issues, Hill stormed its way back into the game.

Megan MacMurray struck first at the 16:32 mark then came scores from Annabella Schafer and two straight from Annika Nordhoy at the 1:43 mark to tie the game, 4-4. The score stayed that way until halftime.

“Our defenders really picked it up after those first four minutes,” Hill coach Marcela Gaitan said. “We held them scoreless for 21 minutes and we really started playing for each other. That is the difference in this being a tie game at halftime versus a six to nothing or whatever it could have been. They really realized that they wanted it.”

Maddie Shoup to Darcy Felter for a sick backhand. Just like first half, PC reels off four straight goals to start second. 8-4 PC with 20:36 to play. pic.twitter.com/7UtNcuBbeS

Maddie Shoup scores her sixth as she falls to the ground. 11-6 PC with 10:43 to play pic.twitter.com/UXeQ8TXl7K

Hill goalie Sam Cifra, who made eight saves in the game, was a big reason for the Blues’ turnaround. She made a number of sensational stops throughout the contest.

“She’s a momentum shifter for our program every single time with the way she stands tall in net against some really sharpshooters,” Gaitan said. “One-v-0 and/or on eight-meters and she shuts them down regularly. She is a game changer for our program.

The start of the second half was a mirror image of the first. Shoup reeled off three straight goals, then assisted Felter on another to spot the Quakers another four-goal lead, 8-4, with 20:36 to play.

“Our practicing and all our plays are coming together really nicely, and we’re finally clicking,” Shoup said.

Scores by Hill’s Emma Lewis and Kerry Elliott made the score 8-6 with 15:03 to play and brought back flashbacks of the Blues’ first-half comeback.

Penn Charter made its adjustments this time.

Bea Buckley scored a minute after Elliottt, Felter added another and Shoup netted her sixth at the 10:43 mark to give PC an 11-6 lead, its biggest of the game.

“We did change up our defense once or twice and we realized we needed to communicate a little bit more and it was just like little mistakes,” Shoup said. “Once we fixed them, it all came together.”

Annabella Schafer gets another back for Hill with 10:10 to go in first. 4-2 PC pic.twitter.com/xJ9WgBB1Fi

Sam Cifra with another stop. pic.twitter.com/QzviuDfEmy

“What I love about our offense is we don’t really have set plays, we have motions,” Felter said. “People like Shoup that understand the game just find the seams. It’s not like an end goal. It doesn’t always end with her but sometimes it does.”

The group helped get the program to its deepest postseason finish.

“We have nine senior swho are all dynamic athletes and who have given a lot in their final spring term, which is an easy time to get distracted,” Gaitan said. “They really remained dialed in for this team and for this program. I got here four years ago, and being able to grow and develop this program with those seniors has been really, really special.”

Penn Charter’s victory pushed the Quakers into the PAISAA title game for the first time. They hope to avenge a loss to Springside-Chestnut Hill earlier this season for the program’s first PAISAA championship.

“After our season last year and ending the way it did, this is huge for us,” Shoup said.