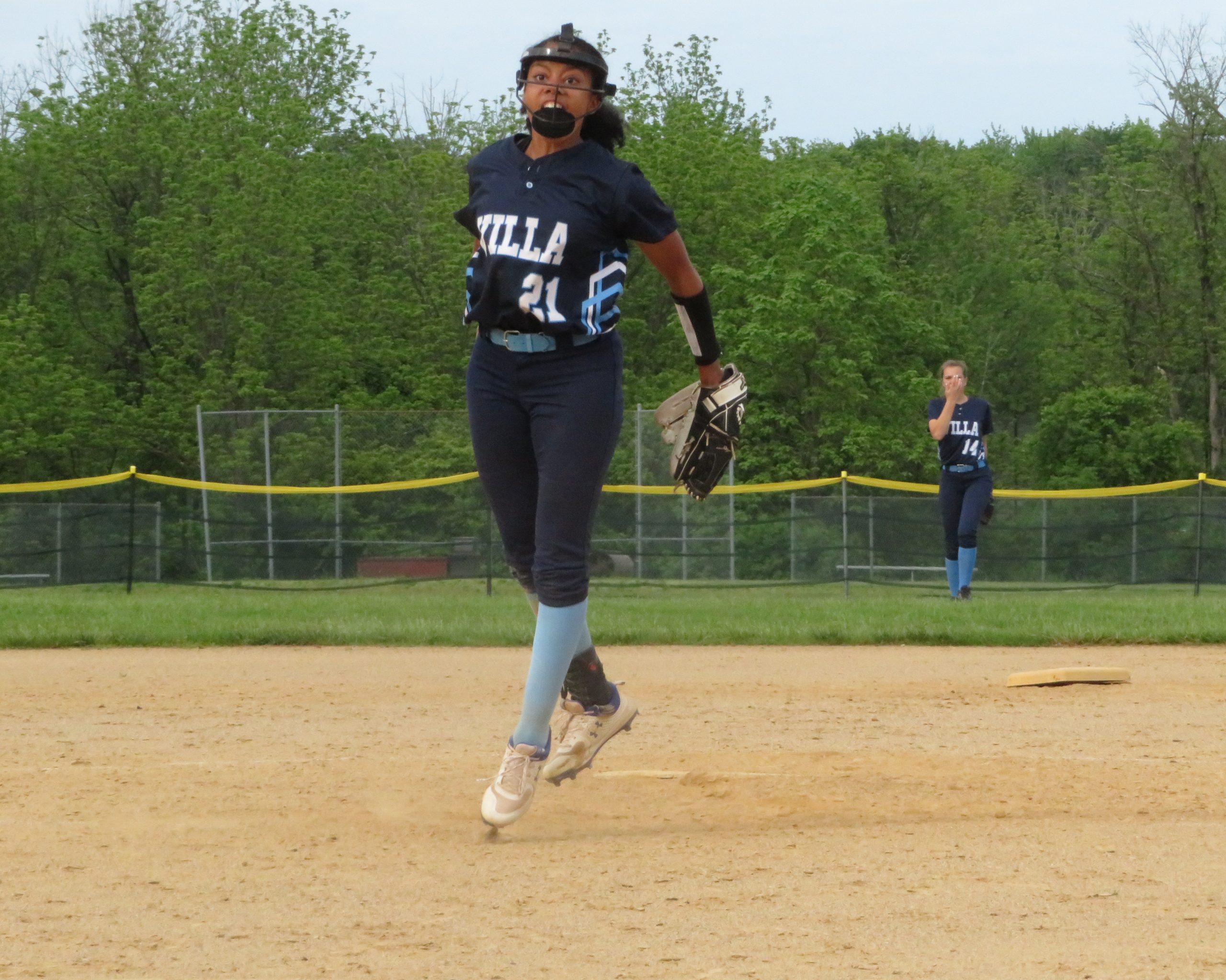 LOWER GWYNEDD >> Villa Maria Academy has been working on its baserunning and it finally paid off.

The third-seeded Hurricanes scored two first-inning runs on first-and-third situations and added another run set up by a stolen base in the third inning of their District 1-4A semifinal against No. 2 Gwynedd Mercy Academy Tuesday afternoon.

Villa Maria pitcher Ariana Butler dominated in the circle and the early run support proved to be enough for a 3-2 win at Gwynedd Mercy Academy High School.

Ella McHugh led off the top of the first inning with a walk, advanced to second on a grounder to third and moved to third on a groundout to second. GMA intentionally walked Natalie Bacallao, for the first of three times, to put runners on the corners. Bacallao stole second and got caught in a rundown. McHugh scored and Bacallao ended up safe on second base.

Bacallao moved to third on a wild pitch while Alex Kilpatrick worked a walk. When Kilpatrick stole second, the throw went to third base, hitting off Bacallao’s helmet and allowing her to score to make it a 2-0 game.

McHugh reached on an error to open the third inning and stole second base. She scored on a Grace Wisler one-out single to increase the Hurricanes advantage to 3-0.

That was all the offense Villa needed with Butler in the circle. The sophomore right-hander threw all seven innings, striking out nine batters to one walk and allowed two runs – one earned – on six hits.

“She is at her gym six out of seven days,” Hartshorn said of Butler. “She’s been doing that. I started pitching coaching with her when she was in seventh grade… Watching her flourish and grow and become this solid athlete – she’s going to be one to watch these next couple of years.”

Butler started the game with three scoreless innings before GMA’s Maddie Seidel hit a one-out triple in the bottom of the fourth. She scored on a Jenna Morrison single to make it 3-1. With Morrison and Lexi Weiss on second and third with one out, Butler recorded back-to-back strikeouts to strand the tying run in scoring position.

She did it again in the fifth. GMA’s Abby Howard and Bria Mahoney hit back-to-back one-out singles and advanced to second and third on a wild pitch. Bacallao caught a bunt from third base for the second out before Wisler caught a foul pop up at first for the final out to end the threat.

“Just keeping my composure the whole time,” Butler said of her success in the clutch, “because I know if I let my emotions get too high, then I might slip up. I just make sure that I’m relaxed and executing the way I know I can.”

GMA added a second run in the sixth when Weiss reached on an error, stole second and scored when Kiersten Dunlap hit into an error, but Butler responded with a strikeout and grounder to second to, yet again, leave the tying run on base.

“We had some things that didn’t go our way,” Hartshorn said, “and that is when you really know if you have a championship team or not. When they can come back from that and just not let it slide like that. I’m very proud of them because they had a lot of things that went wrong… in a crucial time and that still didn’t kill us. That’s usually what kills people who aren’t ready for championships.”

Butler did it herself in the bottom of the seventh. She threw out a batter bunting before closing the game out with two strikeouts to start the Hurricanes celebration.

Butler also reached a milestone in the game. In the third inning, she recorded her second strikeout of the game and 100th of the season.

Seidel started for the Monarchs and threw all seven innings. She struck out nine batters to six walks – three intentional. She allowed three runs on five hits.

Seidel also got out of some tough jams to keep GMA in the game. She stranded runners on first and second in the fourth, left the bases loaded in the fifth and threw out two runners at third in the seventh.

The Hurricanes will face the winner of No. 1 Villa Joseph Marie and No. 4 Lower Moreland for the championship Thursday at 4 p.m.

Gwynedd’s season is over with an 11-8 record.