Rising tosses Downingtown East past Boyertown, into District 1-6A second round 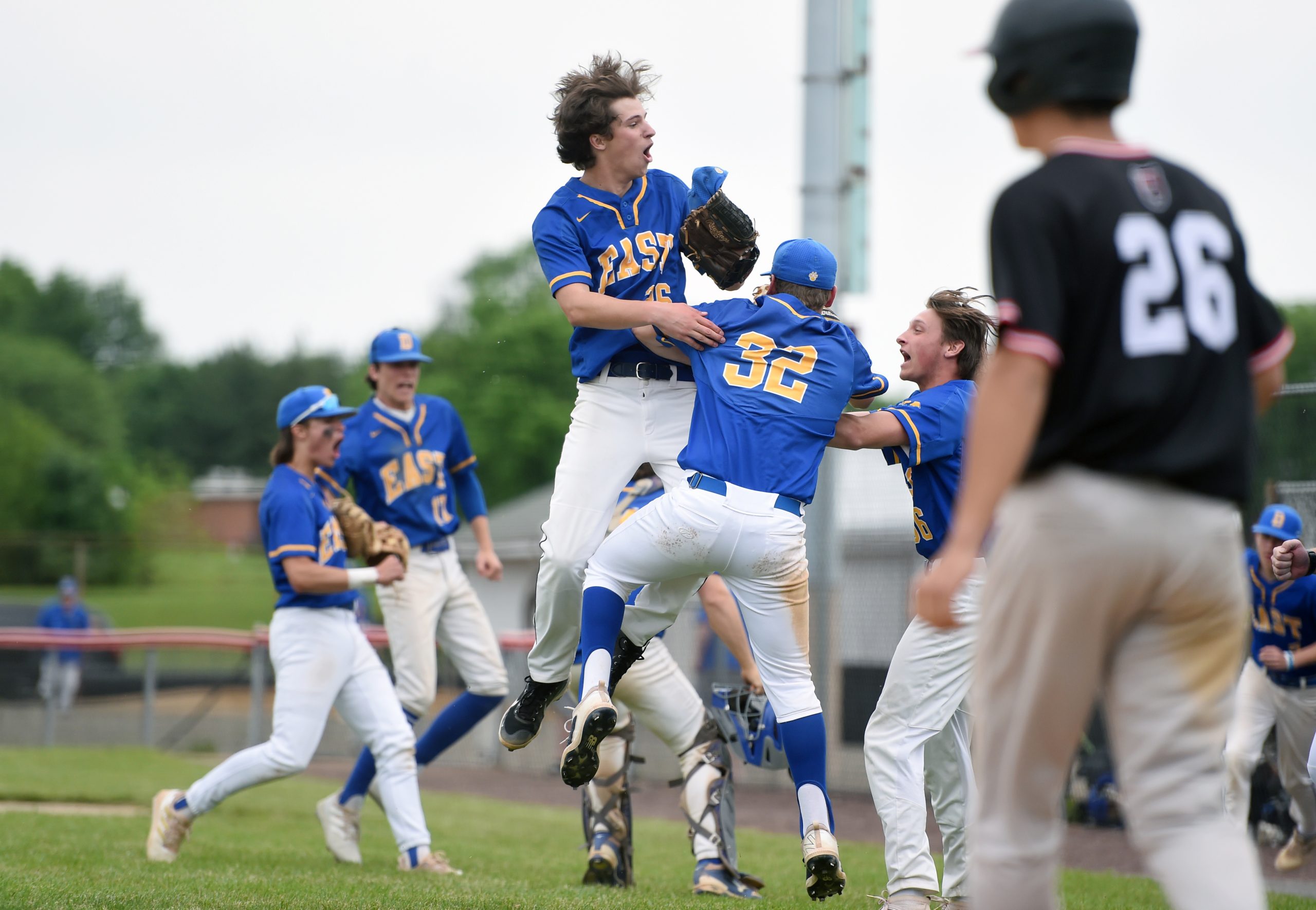 Boyertown pitcher Luc Rising (26) celebrates with teammate Alex Lehman (32) after getting out of a bases loaded jam in the sixth inning in Monday’s District 1-6A first round game at Boyertown. (Owen McCue - MediaNews Group)

Fist pumps, leaps in the air, an occasional exacerbated look after not getting a call … It was clear the demonstrative Rising knew the stakes: Win or go home.

The senior righthander harnessed that energy and turned in a gem during Monday’s District 1-6A first round game at 15th-seeded Boyertown.

Rising went the distance to deliver the 18th-seeded Cougars a 3-2 win and advance Downingtown East to Wednesday’s second round at second-seeded Hatboro-Horsham.

“I had to keep my composure as best I could,” Rising said. “Obviously, I had some outbursts, but I kept my calm, I trusted my team. We had the lead and I just kept going.”

Junior second baseman Nick Mullen plated two runs with a two-out single to put the Cougars up 2-0 in the first. Mullen was the game’s offensive star, going 2-for-3 with three RBI.

After Boyertown (11-10) answered with two runs in the bottom of the first, Mullen put the Cougars up 3-2 in the top of third with a two-out double off the fence.

“I was just looking for the fastball and got it both times,” Mullen said. “I took advantage of it and just hit when I needed to hit.”

Boyertown senior centerfielder Cole Kratz (2-for-3) led off the bottom of the first with a single and senior Alex DeForge followed with a walk, advancing to second and third with no outs.

A dribbler by senior pitcher and right fielder Evan Hetrick was booted by Rising and both Kratz and DeForge scored to even the game.

That would be it for the Boyertown scoring as Rising used a four-pitch mix to shut down the Bears. He allowed six hits, three walks and struck out four in his 101-pitch complete game. Not much was hit hard.

“The last three times he’s thrown, he’s been practically unhittable,” Downingtown East senior catcher Andrew Dewese said. “He’s got four pitches that work, he doesn’t walk guys, lets the defense play behind him. He’s good with guys on base. It’s like art out there. He’s not blowing it by guys but it’s paint. He’s pitching, not throwing.”

Both Dewese and Rising noted things clicked for the righty in a May 5 start against Bishop Shanahan.

“When we played Shanahan I started throwing my two-seam instead of my four-seam and that’s been more effective with my curveball and change-up,” Rising said. “I’ve been having fun since then, haven’t been giving up many hits or runs.”

Boyertown senior reliever Nathan Fox (5 IP, 1 H, 1 R, 1 BB, 4K) shut down the Cougars the rest of the game after Mullen’s two-out double in the third.

The Bears’ best chance to answer came in the bottom of the sixth when another leadoff single by Kratz and an error by the Cougars put Boyertown in a first and third situation with no outs.

Rising fielded the ball back to himself and got the lead runner on a 50/50 call. A walk loaded the bases with one out, but Rising forced a double play turned by Mullen and junior shortstop Jake Schultz to escape the jam before retiring the Bears in order in the seventh to close out the win.

“This group playing together since ninth grade, we’ve always had each others’ backs,” Boyertown senior Brandon Shane said. “We knew it wasn’t going to be like last year. We were going to have to scrap our way through games and be that tough group. Unfortunately it just didn’t go our way tonight.”

They pieced enough together in a very difficult PAC Liberty Division to get the Bears back to another district playoff appearance.

“All the seniors did great things this year and last year,” Shane said.

“It’s definitely going to be one (career) to remember. Having the history at Boyertown, you always want to keep the postseason going. I’ll definitely remember this for the rest of my life.”

Downingtown East exited the district tournament in the first round in 2021 following a semifinal trip in 2019.

The Cougars also have a large group of seniors hoping to go on a run of their own before their careers come to end.

“Same thing as it was today,” Dewese said of the mindset. “No matter what it looks like, we just gotta come out on top.”

NOTES >> Dewese threw out all three of Boyertown’s attempted base stealers. … Peyton Moyer had two hits for the Bears.

Boyertown third baseman Easton Albert throws to first base for an out in Monday’s District 1-6A first round game against Downingtown East. (Owen McCue – MediaNews Group)

Boyertown second baseman Luke Moser throws to first for an out in Monday’s District 1-6A first round game against Downingtown East. (Owen McCue – MediaNews Group)

Boyertown’s Nathan Fox tosses a pitch against Downingtown East on Monday in a District 1-6A first round game. (Owen McCue – MediaNews Group)