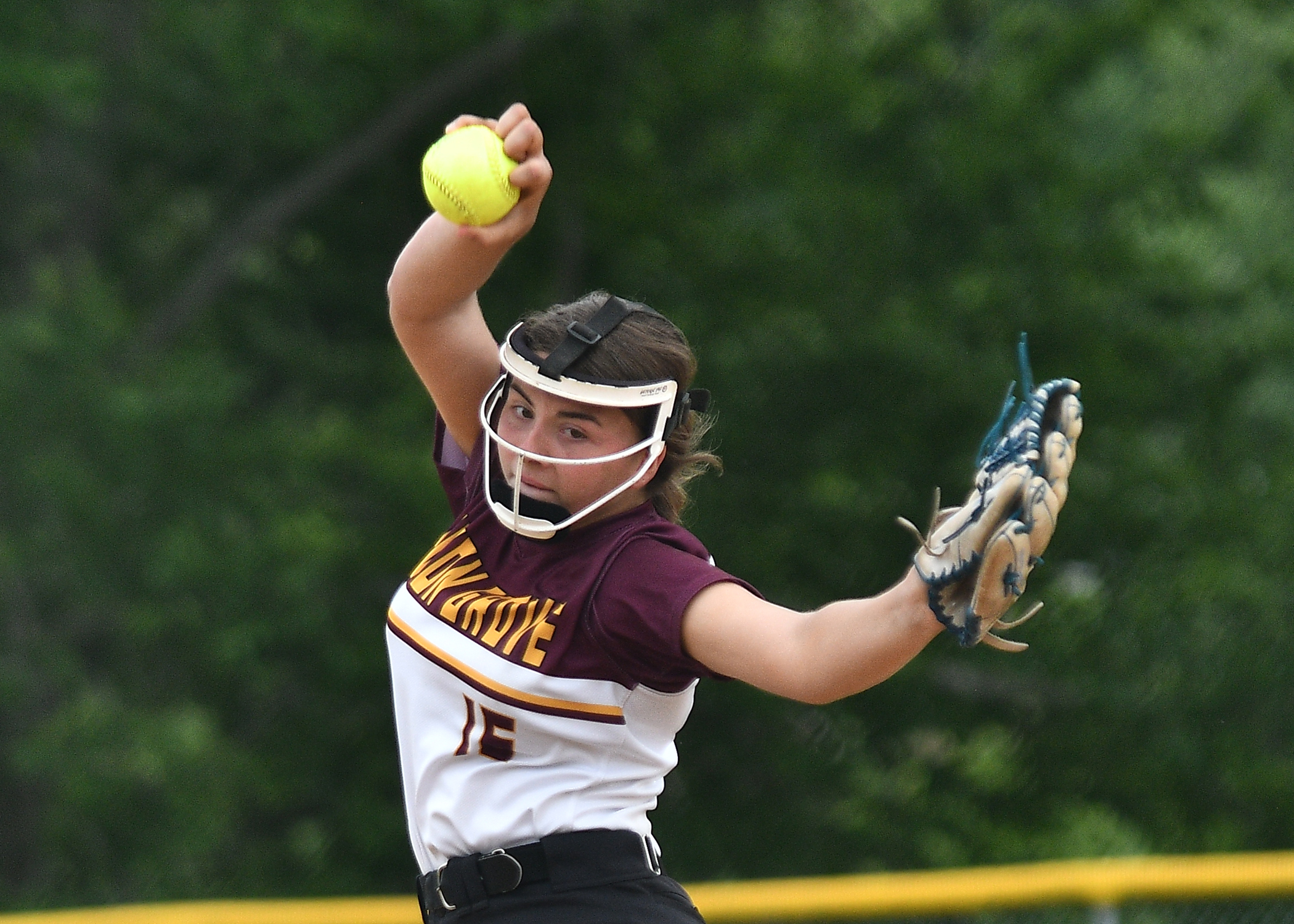 Peyton Hale delivers a pitch for Avon Grove. Hale struck out 14 hitters in the Red Devils 5-3 win over Wissahickon in the District 1, Class 6A softball opener (BILL RUDICK for MediaNews Group)

WEST GROVE >> A season ago, the Avon Grove softball team made an early exit from the district playoffs, getting knocked off in the first round. The 2022 squad was bound and determined to avoid a similar outcome this season as the No. 14 Red Devils squared off against No. 18 Wissahickon in the opening round of the District 1, Class 6A tournament.

Behind the stellar pitching of ace Peyton Hale, solid defense, and some timely hitting, host Avon Grove (16-5 overall) ended Wissahickon’s season, topping the visiting Trojans (13-8) by a score of 5-3.

Avon Grove advances to Wednesday’s second round, when they will travel to North Penn to face the No. 3 Knights.

“Great way to start,” said Avon Grove coach Andria Pannell. “We knew they were going to be a tough team — that left fielder probably robbed us of six runs. But we did what we needed to do to get it done.”

The Red Devils jumped out to an early lead, plating a pair of runs in the first. Lexi Smith (2-4, RBI, R) led off the home half of the inning with a single, and moved up sixty feet on a sacrifice from Hale. Cait Long (1-3, R) followed with a single to make it first and third, and moved up to second with a stolen base, giving the Devils two runners in scoring position for clean-up hitter Mel Sebastro. Sebastro (1-3, 2 RBI) did her job, ripping a base hit to the gap in right center to knock in both runners.

“I felt really good to get out in front early like that,” said Hale. “It showed we were going to be hitting. It’s really exciting to get that first win after getting knocked out in the first round last year.”

Hale was nearly unhittable in the early going, with nine of the first eleven outs coming by way of the strikeout. In picking up with win in the circle, Hale allowed three runs — two earned — on five hits. She struck out 14, and walked just two.

“Peyton came into the game with 263 strikeouts,” said Pannell. “She kills it in the circle all year, and today, she just did what she does. We always know we can count on her. We just need to get the bats going a little more for her.”

The Trojans, trailing 2-0 got on the board with a run in the fourth. After Katelyn Fitzgerald reached on an error, Grace Franczyk ripped a triple down the line in right to make it a 2-1 game.

“We started the day without our No. 1 pitcher and our best hitter,” said Wissahickon coach Mike Borkowski. “Danielle Ciliberto was sitting on the bench with a knee injury. But Emma Dutill came in, without a lot of time pitching this season, and did a pretty solid job against a good Avon Grove team.”

Avon Grove answered back with two of their own in the bottom half of the inning. Taylor Morris came into the game as a pinch hitter, and led off with a single, moving up to second on a sacrifice bunt from Ana DiCampli. Michaela Sycalik followed with a single to right. After Riley Weircinski worked a base on balls, Smith singled to right to score Morris and Sycalik.

Undaunted, Wissahickon fought their way back in it in the top of the fifth. With a pair of runners on, Morgan Risynchok made sure they wouldn’t be stranded, delivering a base hit to right to knock both in and cut the Red Devils lead to 4-3.

Wissahickon’s Grace Franczyk is caught in a run down, with AG catcher Cait Long pursues (BILL RUDICK for MediaNews Group)

“Before the game, we talked about who would step it up for the playoffs,” said Borkowski. “Marren Carter made some great plays in left. Emily Fox was solid at third, and Morgan came up with a big hit.  So we had so girls really step up, but we just fell a little short.”

“I woke up today ready to play,” said Morris. “When I got my chance to come in the fourth, I just did my best to make contact and get on base. It feels great to get this first win, and now we’ll just have to keep it going against North Penn.”

5A Baseball: Oxford rolls over Radnor in District 1 opening round
Rising tosses Downingtown East past Boyertown, into District 1-6A second round