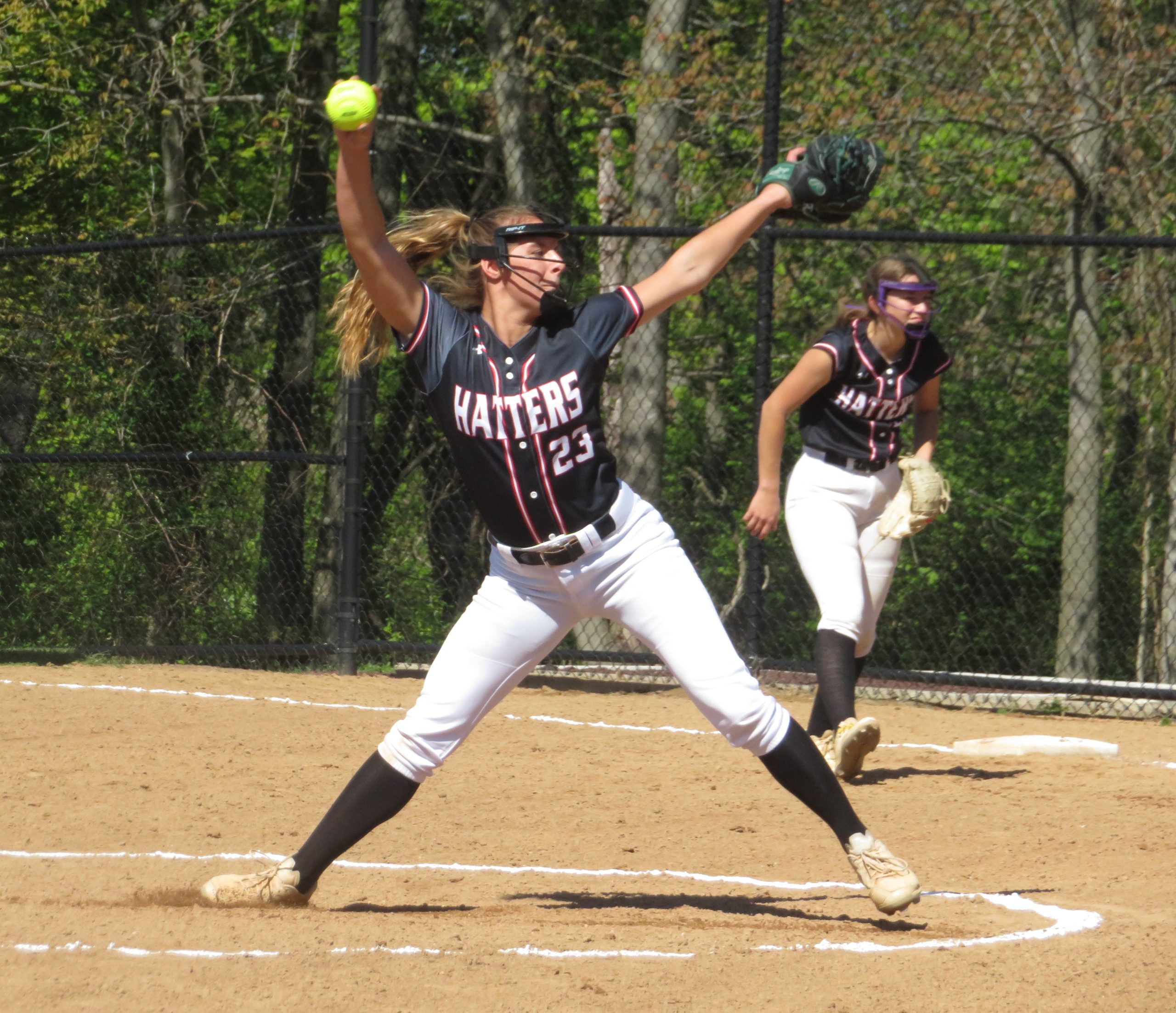 Hatboro-Horsham's Kendal Leitner pitches in the top of the first inning against Plymouth Whitemarsh on Monday, May 9, 2022. (Ed Morlock/MediaNews Group)

HORSHAM >> Kendal Leitner walked out of the circle after the seventh inning the same way she had six times before — high-fiving her teammates on the way to the third-base dugout. There was no indication that she just put an exclamation point on her historic performance.

The Hatboro-Horsham senior was calm, cool and collected after throwing a 20-strikeout no-hitter in a 5-0 Suburban One League Liberty Division win over Plymouth Whitemarsh Monday afternoon at Hatboro-Horsham Senior High School.

“We have things to accomplish as a team and she takes on that mindset,” Hatters coach Kelly Krier said. “It’s a team-player mindset and she has the last two seasons. All of her individual accomplishments always fall behind our team accomplishments and that’s what makes her such a great player because the team comes first. I’m just so happy for her today and she didn’t even know until we got out in the field how many strikeouts she had.”

Hatboro-Horsham’s Kendal Leitner pitches in the top of the sixth inning against Plymouth Whitemarsh Monday, May 9, 2022. (Ed Morlock – MediaNews Group)

It was Leitner’s third no-hitter of the season and second in eight days after blanking William Tennent last Monday. She’s thrown 60 innings this season with a 3.617 ERA, 128 strikeouts and 31 hits allowed.

The right-hander hit one batter and walked three as the Hatters (12-3, 12-1 SOL Liberty) completed a season sweep of Plymouth Whitemarsh after beating the Colonials 6-3 on April 12.

The only ball PW put in play came in the top of the third inning. With a 1-0 lead, two outs and the tying run on second base, Leitner got a grounder to third, where Amya Lundy made the play to get out of the jam.

“Twenty out of 21,” Krier said of Leitner’s strikeout performance. “When we gave her the game ball, I jokingly handed it to Amya because Amya had the one groundout. We try to have fun as a team and smile and laugh while at the same time recognize what a tremendous accomplishment that is. We have great defensive players but today we didn’t really need them all that much because Kendal took the ball and rode with it. Her and (catcher) Abby (Waeltz) were in great rhythm and it was great.”

“(Leitner’s) the best pitcher in the area for a reason,” PW coach Mike Perez said. “We knew that coming in and we had Sydney (Andrews) last week with Quakertown – the same thing. We knew coming in that it was going to be tough, but she was just on today and we just could not catch up. You have to expect to come in and strike out a bunch against her, but we have to find a way to put a ball in play at some point, make something happen. Despite that, I think we were in that game for a while. Just needed someone to get on at some point and it could have turned that around.”

Marissa Rapino, Leitner and Lundy got it done on the offensive side for the Hatters. The 2-3-4 hitters went a combined 10-for-11 at the plate with a walk. Rapino went 4-for-4 with four runs scored while Leitner was 3-for-3 with one run and one RBI and Lundy 3-for-4 with three RBI. They got on base in all 12 plate appearances with Lundy reaching on an error in the third inning.

“We’ve been lucky the last few weeks,” Krier said. “We’ve had groups do that in different games. It’s a different set of three or four who have worked cooperatively and gotten runs in when we needed to. Today it was their number.”

“Whenever Marissa gets a hit we’re like, ‘We gotta keep this rolling,'” Leitner said. “When Amya gets her hits you know it’s on. You know you have to keep it going because she wants to make it around.”

Molly Moore threw all six innings for the Colonials (11-5, 9-4 SOL Liberty). She struck out five batters to one walk and allowed five runs on 10 hits. Her defense made five errors in the game and had a couple other tough plays go the Hatters way.

“(Hatboro-Horsham) hits,” Perez said. “They hit the ball hard. You have to be ready and field the ball cleanly. If you’re not on your toes it’s going to bounce off you like we saw out there a couple times. We have a lot of reflecting to do and with four games left, a big one (Tuesday) against Upper Dublin and we just have to put that behind us and start fresh.”