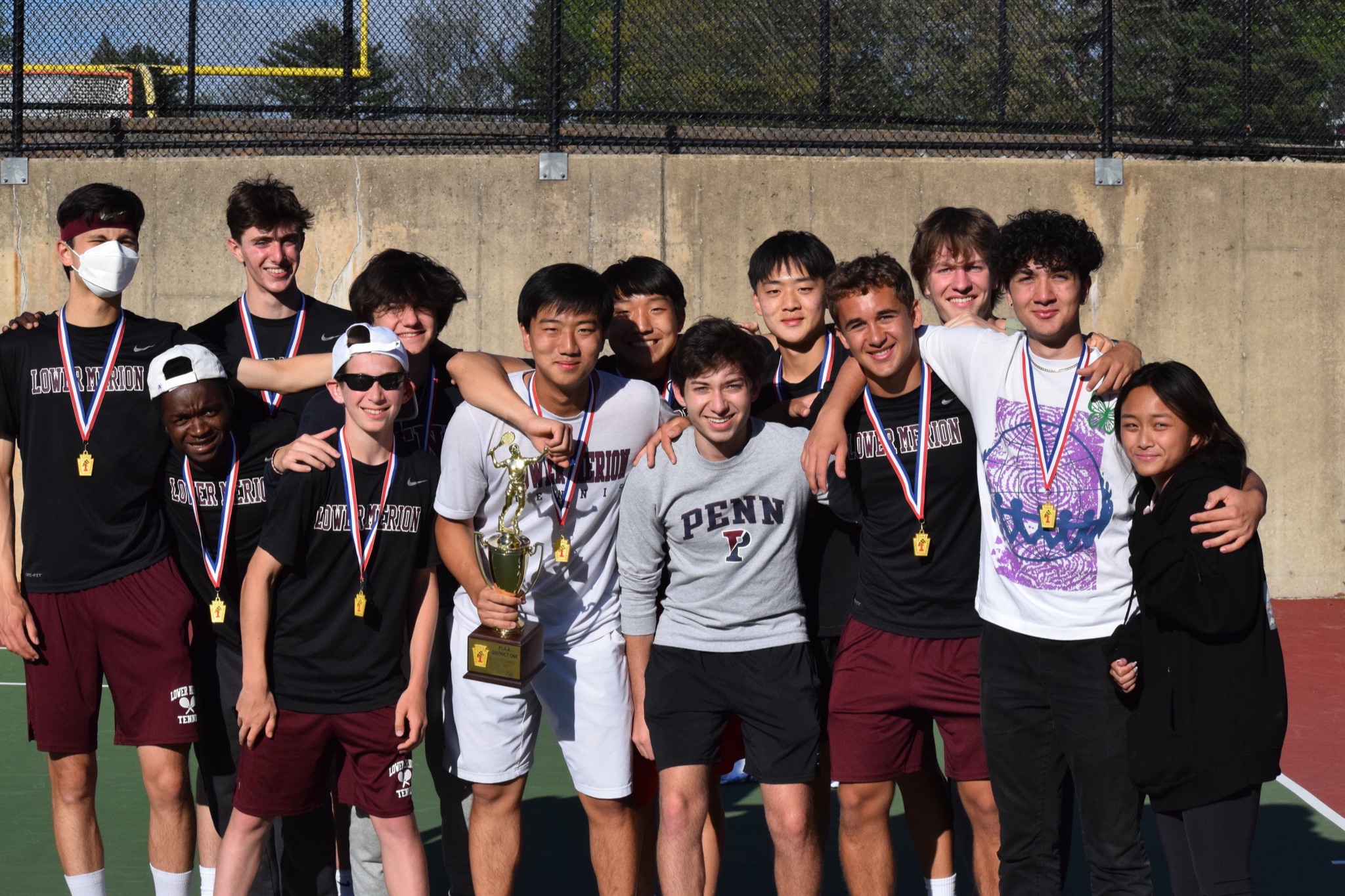 Lower Merion >> The Lower Merion High School boys’ tennis squad successfully defended its PIAA District 1 3A team title with a 3-1 win against Conestoga in the championship finals Monday.
The Aces (19-0) captured the championship final Monday with wins at first singles (senior Justin Yi), second singles (sophomore Brian Yi) and first doubles (juniors Stoyan Angelov and Adam Lee). Two of the victories were extended to three sets.
At first singles, Justin Yi defeated Justin Xu, 3-6, 6-2, 6-2. This was a battle between two players who each finished in the top five at the recent District 1 3A singles tournament (Yi was second, Xu fifth).
At second singles, Brian Yi defeated Rohan Rao, 6-2, 6-1; and at first doubles, Angelov and Lee defeated Manas Dhawan and Basil Lubiniecki, 6-2, 3-6, 6-4.
For Conestoga, at second doubles, Vincent Yao and Raphael Lubiniecki defeated LM’s Scotty Stuart and Charlie Bittinger, 6-4, 6-4. When the Aces clinched the match, the third singles match was stopped – at that point Lower Merion junior Mark Lancaster had a 6-1 win against Aaron Sun in the first set and was trailing 4-5 in the second set.
“Winning the district title today was really important – I think winning it this year was harder than last year,” said Justin Yi, a National Honor Society student who played third singles last spring for the Aces. “We lost a lot of good seniors to graduation last spring, but our team has really improved throughout this season.”
“Our team has bonded really well this year,” said Brian Yi, who played first doubles for the Aces last year. “We’ve been able to meet a lot of new teammates this year. We have the opportunity to appreciate each player’s uniqueness and make a lifelong connection with each of them.”
Lancaster, who played second doubles for the Aces last spring, said, “I’m glad I’ve been able to remain a part of this team in a singles role this year. Winning the district title [again] is great – Conestoga is always tough.”
Conestoga (16-2), the No. 3 seed in the District 1 3A team tournament, has suffered only two losses this season, both to Lower Merion. To get to the District 1 3A team championship final, the Pioneers defeated No. 2 seed Unionville in the semifinals.
“I’m extremely proud of our team,” said Conestoga coach Brittany Aimone. “They all played their hearts out today. Justin [Xu] cramped up in the middle of his match, but he kept playing, kept persevering – it was remarkable.”
The Aces now will defend their PIAA 3A state team title in the upcoming state tourney, with the first round scheduled for May 17. Conestoga also qualified for the state team tourney, as a top four finisher in the District 1 3A team tournament.