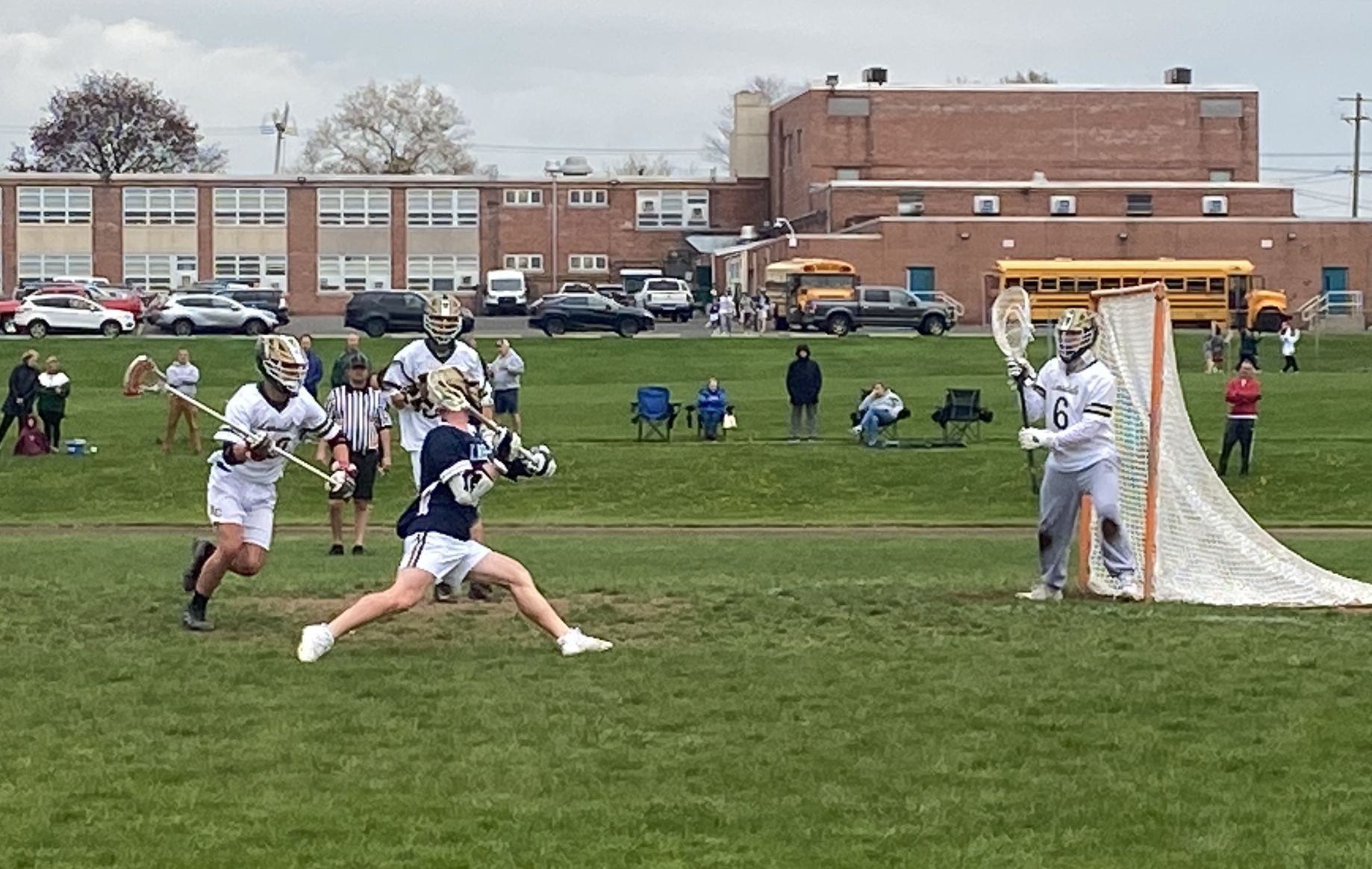 LANSDALE >> For goalkeeper Jack Kennedy and the Lansdale Catholic defense, there probably will not be a bigger stress test than facing the La Salle boys lacrosse team’s attack.

“As a sophomore I never played as a varsity (goalie) against La Salle,” Kennedy said. “I was really expecting something different but I didn’t realize they were this good and kind of underestimated them maybe. I learned a lot as a team defense, our flaws and that we need to perform better and talk more.”

The visiting Explorers showed why they are the benchmark of the Philadelphia Catholic League Tuesday afternoon, jumping out to a 7-0 lead after a quarter and scoring the game’s first 13 goals in rolling to a 16-2 victory and handing the Crusaders’ their first loss.

“I just think we did a good job of running our offense, just running our clears, doing everything the right way,” Explorers senior Andrew Kelly said. “Good overall effort for us.”

“They’re the gold standard, they’re the measuring stick, the way those coaches have their team prepared and ready to go day in and day out is what you aspire to be like,” said Lansdale Catholic coach Mark Princehorn of La Salle. “(Explorers head) coach (Rob) Forster, coach (Tony) Resch are phenomenal coaches, been at it a long, long time. And you can’t make simple day one mistakes against a team that good because they will capitalize and they did.

“And you refer to the measuring stick game and outside of playing Upper Dublin back on the 28th of March, really haven’t been tested. So some of the areas where we really need to make improvements were very glaring.”

The Explorers had a seven-game win streak snapped last Thursday as Episcopal Academy scored twice in the final seconds of the fourth to tie the game then claim a 7-6 win in overtime.

BOYS #LACROSSE: @LaSalle_Sports’s Andrew Kelly collects a ground ball in front of the net then scores with a nifty behind-the-back shot 1Q vs. Lansdale Catholic. pic.twitter.com/Uj2jDYjzYD

Tuesday, La Salle had a 2-0 lead 1:49 in the contest of the last two sides unbeaten in Catholic League play and doubled the advantage when Kelly scooped a ground ball in front of the net and put a behind-the-back shot in at 7:00 in the first quarter.

“I worked on my crease finishing and shooting a lot during this offseason,” Kelly said.

The Explorers took an 11-0 lead into halftime and were up 13-0 before Colin Corbett tallied LC’s first goal in the third quarter.

“I thought we were moving the ball well and then something we’ve been focusing on after the Episcopal game was our shooting,” Forster said. “And our shooting percentage was pretty good, their goalie played very well. So even some of the shots we put on net but he was making saves which is fine.”

Kennedy, who took over between the pipes for LC after All-PCL first-team netminder Connor Flanagan graduated, finished with 13 saves.

“Tremendous shoes to fill and he’s doing his very best filling those shoes,” said Princehorn of Kennedy. “We’re very happy with the way he’s played. I’m very, very proud of him. I thought today was one of his better games.”

Connor Mann had a goal and assist for the Crusaders (7-1, 5-1), the senior Belmont Abbey commit recording his 200th career point as he came around the net to score in the fourth quarter.

Lansdale Catholic still has three games left to play this week, starting Wednesday on the road against Father Judge at 3:45 p.m. Thursday, LC hosts Conwell-Egan at 3:45 p.m. then Saturday steps out of league play for a home game against Marple Newtown at 3 p.m.

“We didn’t get tested in a way until today where we could focus on mistakes and the mistakes we really need to really correct were very apparent,” Princehorn said. “And we got to have a quick turnaround cause we play two league games tomorrow and Thursday and then we play a very good Marple Newtown team on Saturday.

“And then we go into a tough week where (Bishop) Shanahan’s on Monday, Devon Prep’s on Wednesday, (St. Joseph’s) Prep is on Friday so we got to figure out these mistakes and correct them and get back to playing good lacrosse.”

“I thought today was very positive,” Forster said. “Credit to Lansdale Catholic they came out, put up a good fight they were ready to go. Our seniors led the way for us. League game – every league game’s a big game for us.”

Oppenheimer charged to the net and scored for a 5-0 La Salle lead at 5:55 in the first quarter. After an Owen Dougherty goal at 4:58, Kelly found the back of the net for the third time off an assist from Jack Vandegrift at 2:15 to make it 7-0.

“Their off-ball movement, their stick skills are obviously very good,” said Kennedy of the Explorers. “They can throw cross-field passes no problem and it lights our defense up and we have a young defense, we only have two seniors on our starting defense so we still have a lot to learn, we still have a long season ahead of us.”

Kelly’s fourth goal put La Salle up 9-0 at 6:35 as he rifled a shot in off a Leyton Bracken assist. Oppenheimer found the opposite top corner at 2:25 while Harrison Sweitzer made it 11-0 with 20 seconds left before halftime.