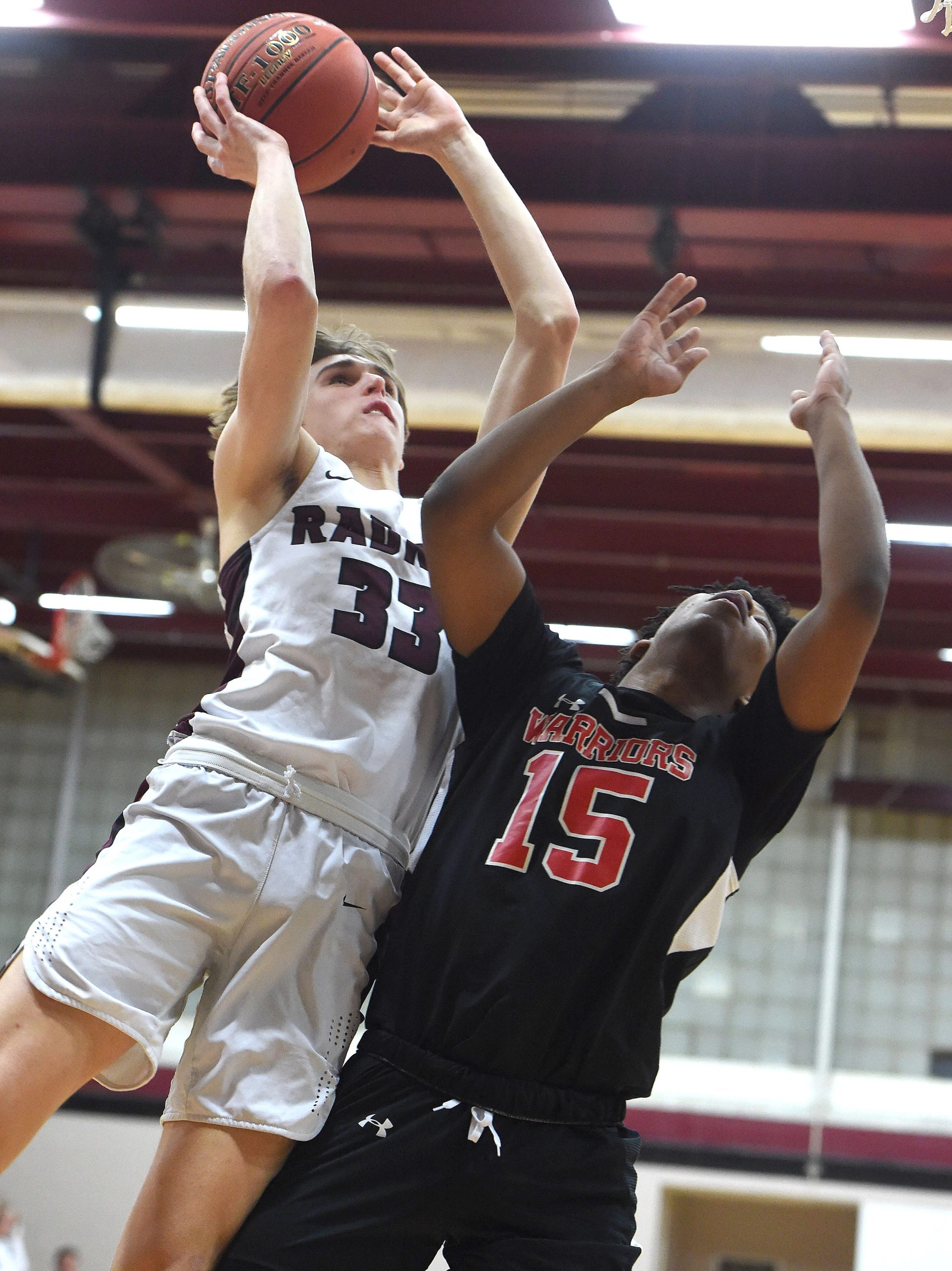 Radnor's Jackson Hicke rolls over Susquehannock's Jalen Franklin in the first quarter Tuesday. Hicke had all 17 points in the quarter and 38 overall in the Raptors' 75-56 victory in the PIAA Class 5A playoffs Tuesday evening. (PETE BANNAN - DAILY TIMES)

In addition to Player of the Year Izaiah Pasha of Cardinal O’Hara, the rest of the All-Delco team includes:

Jackson Hicke, Radnor: For all the exemplary balance that the Raptors showed in a historic season, Hicke was the clear offensive standout. He led the team by averaging 16.5 points per game, one of five starters averaging at least six points per outing and seventh-best in Delaware County this season. But his scoring touch had the game-breaking potential that forced opponents to craft their defenses around him. At 6-5, Hicke is able to create space for himself in the lane, handle the ball while running the point and be a lethal catch-and-shoot option beyond the arc. He led the Raptors to one of the best seasons in program history, with 23 wins, a 14-2 Central League record on the way to the league championship game and a run to the second round of the PIAA Class 5A tournament. Hicke had 12 games of 20 points or more, the pinnacle coming in the first round of states when he steered Radnor past Susquehannock with 38 points in a 75-56 win. He added 21 points in the District 1 Class 5A final, an overtime loss to Chester. He blitzed Conestoga for 27 points and Holy Ghost Prep for 25, part of a 13-0 start to the season for Radnor. A first team All-Central selection by league coaches, Hicke is the first Radnor All-Delco since Glenn Washington in 2005-06.

Chester’s Larenzo Jerkins grabs a rebound in the second half against Archbishop Ryan in the PIAA Class 5A playoffs. (PETE BANNAN- DAILY TIMES)

Moses Hipps, Archbishop Carroll: Just a sophomore, Hipps was one of the more explosive scorers in the Catholic League this season. At 18.9 points per game, he finished second in Delco in scoring average, and he led the county with 76 made 3-pointers, at a rate of 40.6 percent. He was a big reason why the Patriots lasted until the semifinals of the PIAA Class 4A tournament after an up-and-down regular season. The 6-3 shooting guard was capable of impressive scoring outbursts, led by 35 points in a loss to Neumann-Goretti in the regular season. He added 25 points in the Catholic League playoffs, a loss to Devon Prep, then poured in 31 points in the team’s first two states wins, over Berks Catholic and Athens. Hipps, a second-team All-Catholic pick, also averaged 3.9 rebounds and 1.8 assists per game. Hipps already has several Division I offers, including from Temple and La Salle.

Larenzo Jerkins, Chester: There was no shortage of potential stars each night for the Clippers, with six players averaging at least six points per game. But Jerkins, the bouncy sophomore 6-5 wing, was most often the one to shoulder the load. Jerkins was the leading scorer for the District 1 Class 5A champions on the season, averaging 12.9 points per game. He was especially vital early, as the rotation solidified around him, in helping Chester earn its fifth straight Del Val title. The Clippers advanced to the PIAA Class 5A semifinals. Jerkins averaged a double-double with 10.5 rebounds per game (second on the team behind Isaiah Freeman’s 13.2). Jerkins did it all, his length spearheading Chester’s suffocating press defense with 4.0 steals per game, plus 3.2 blocks per outing in the post. Jerkins topped out offensively with a 25-point outing in the second win over Penn Wood. He added 23 points and 17 rebounds in a win over Interboro.

Dean Coleman-Newsome, Archbishop Carroll: The junior guard was a driving force of the Patriots’ ride to the state semifinals, coming back strong this season after missing his sophomore campaign due to injury. A do-everything combo guard who is speedy and solidly built at 6-3, Coleman-Newsome was second on the team in scoring average at 14.4 points per game. He added a team-best 7.0 rebounds per game plus 3.2 assists per outing. A tremendous driver to the hoop off the dribble, he also was a 30 percent 3-point shooter, with 34 made triples. His season was typified by his dominance in the second round of the PIAA Class 4A tournament, in which he posted a triple-double of 13 points, 10 assists and 11 rebounds in shelling Athens. Coleman-Newsome scored 21 points in a win over Episcopal Academy in December and added a 23-point showing in a loss to Bonner-Prendergast. Coleman-Newsome is garnering Division I interest.

Nick Colucci, Haverford: The lone senior on this year’s All-Delco team, Colucci got Haverford going on the way to 19 wins, a 13-3 league mark and an appearance in the PIAA Class 6A tournament. Colucci wasn’t the team’s leading scorer – that honor went to junior sharpshooter Googie Seidman at 14.5 points per game – but Colucci was second at 12.3 points per. He inherited the backcourt workhorse role from 1,000-point scorer John Seidman and now inherits the elder Seidman’s All-Delco recognition. Colucci had some of his biggest scoring games early in the season – 27 points in an overtime win over Great Valley, 24 points in beating Council Rock South in December. He settled into a rhythm with a balanced Fords team where his contributions went beyond scoring, orchestrating the offense and drawing one of the tougher defensive assignments. He tallied 18 points in a win at Conestoga in January and 17 in a one-point victory over Springfield. Colucci was voted first-team All-Central by league coaches. He will continue his career at the University of Scranton.