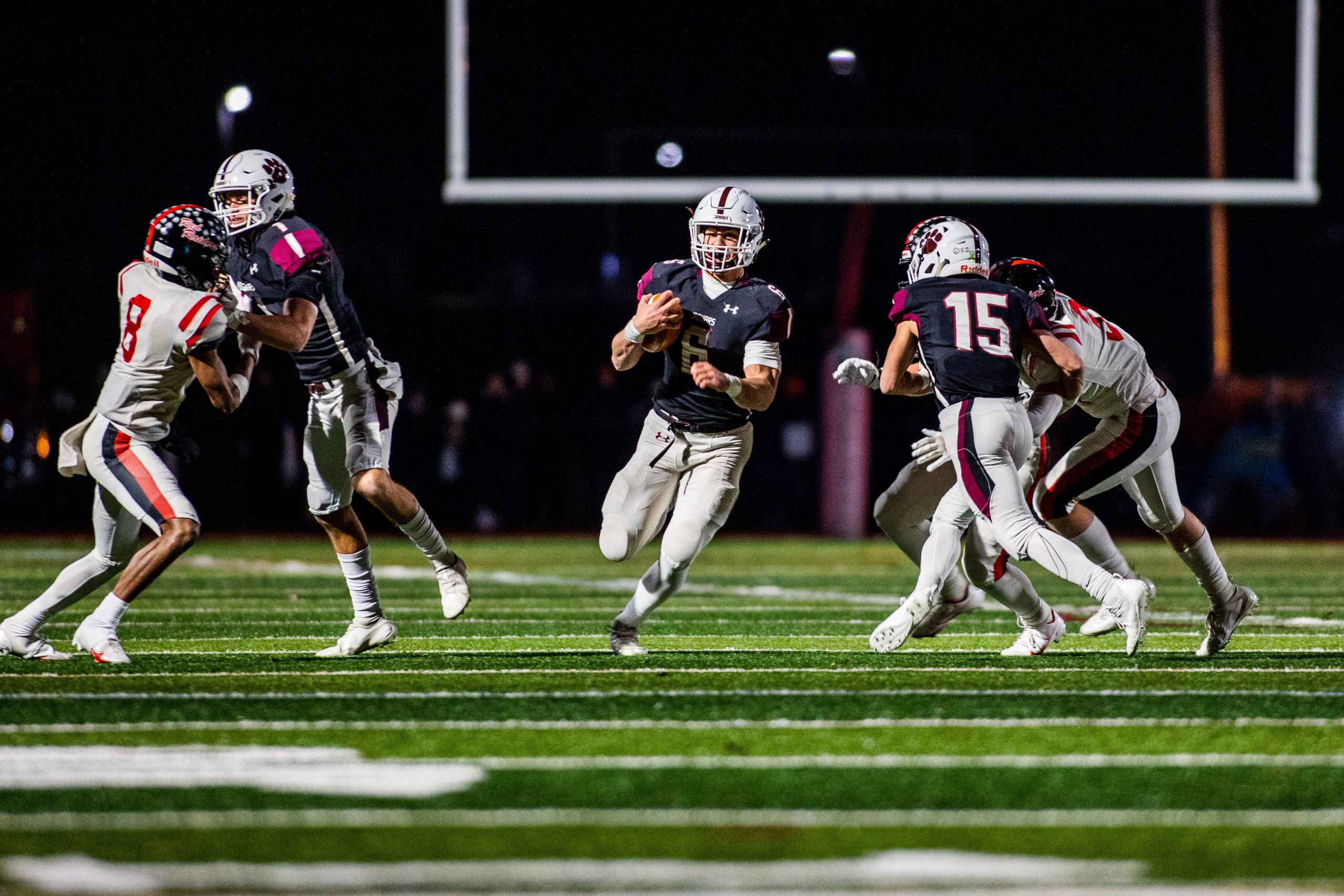 Garnet Valley's Shane Reynolds hits the hole on his way to a third-quarter touchdown. (Nate Heckenberger - For MediaNews Group)

CONCORD — The clock still showed more than nine minutes to play when Max Busenkell and Shane Reynolds embraced on the Garnet Valley sidelines, with more than a few tears shed in the exchange.

Their work for the night was done. Their legacies in Jaguars history were cemented. But for that moment, for the distance they’d traveled and the obstacles their team had collectively surmounted, there was no holding back the emotions.

“It’s just amazing,” Busenkell said. “It got me very emotional. He was out for what, seven weeks, eight weeks. Just to see him get back and thrive in the moment, it’s great.”

Reynolds ran for 225 yards and four touchdowns. Busenkell threw two touchdowns to Joey Halloran and twice intercepted his opposite number, Coatesville quarterback Harry Susi. And the bullet-pointed list of GV players who played their roles near flawlessly in the biggest moments of their football lives extended long into the Concord night, summing to a 54-15 demolition of their albatross Coatesville in the District 1 Class 6A final.

The Jaguars (14-0) are into the state semifinals against perennial powerhouse St. Joseph’s Prep. The Hawklets survived a rare scare from Bethlehem Freedom, 24-21, in their PIAA quarterfinal.

The Jags authored a near perfect performance. In what has been a whirlwind of emotions – from legend Mike Ricci coaching his final game at Moe DeFrank Stadium, to the injury that cost Navy-bound Reynolds much of the season, to a knee injury that deprived them Friday of all-purpose standout Sean Gallagher, the Jaguars let it all fuel them Friday night.

One boost was provided by Jack Westburg, who filled the role vacated when Gallagher was felled by the injury in the district semifinal against Quakertown. Gallagher’s status for next week remains uncertain. In the interim, Westburg rushed seven times for 74 yards, including a 57-yard jaunt to set up a one-yard score by Reynolds. That gave Garnet Valley the lead for good at 14-7.

Garnet Valley’s Joey Halloran gets Coatesville’s Harrison Susi in the grasp, leading to a safety due to an intentional grounding penalty. (Nate Heckenberger – For MediaNews Group)

“It was a big role to play,” Westburg said. “We always talk about next-man-up mentality. We didn’t really think about missing Gal; we just talked about the play script and how we were going to beat Coatesville.”

Another boost came from a swarming defense. The Red Raiders (12-2) had averaged 39.5 points per game this season. But from the time that Tommy Ortega caught a 10-yard touchdown from Susi at 8:19 of the second quarter, the Coatesville offense got absolutely nothing. The Red Raiders’ only points the rest of the way came on a safety in the fourth quarter.

At halftime, Coatesville had 198 yards of offense; Reynolds had 204.

The teams traded points early in what looked like a repeat of past district shootouts. Ortega’s touchdown was followed by a missed PAT that left Garnet Valley up 14-13. That’s when the Jaguars took over.

“We hit our gaps, 100 percent to the ball,” linebacker Andrew Jackalous said. “No one takes a play off, everyone is full speed to the ball. With that, we need to get stops, and the offense does the rest of the work.”

The stiff gale at Moe DeFrank Stadium was a factor. Going into the wind in the first quarter, the Jaguars managed to drain the clock and stalemate at 7-7. In the second, they used the wind at their backs to push the tempo.

“Biggest thing was, we knew we needed to come out and make a stop in that first series and they had that big home run and started things off from there,” said Coatesville coach Matt Ortega, whose team was outscored 47-6 in the middle quarters when it went into the wind. “We wanted to be able to take advantage of the wind in the first quarter and it just didn’t happen that way and it just steamrolled in the second quarter.”

Reynolds busted a 65-yard score to answer Tommy Ortega’s TD within 19 seconds to make it 21-13. Instead of punting into the wind, Coatesville went for it on fourth-and-5 at its 25 on the next series, trying to match two fourth-down successes by GV in the first quarter.

But a Coatesville pass fell incomplete. Given the golden chance, it would take two snaps for Busenkell to hit Halloran for a 30-yard score.

Jackalous flushed Susi out of the pocket on the next drive, allowing Busenkell to pick off a deep ball. Two more plays and Reynolds made it 35-13, Westburg and Luke Lassik sealing a massive hole off left end that Reynolds could’ve driven a truck through.

“It’s huge. We needed that,” Jackalous said of the interception. “His pick came in at a great time, and it really helped turn the game around.”

Zach Liberatore, who blasted seven touchbacks, booted a 45-yard field goal with nine seconds left in the first half, to send the Jags into the break up 38-13. Halloran added a 25-yard touchdown catch in the third quarter. Susi ran 13 times for 98 yards but was injured on the first series of the second half. He was just 4-for-9 for 33 yards through the air. Ashon Wesley, who ran for a two-yard score in the first quarter, carried nine times for 47 yards.

For GV, CJ Wood, Jackalous and Jack Collins were outstanding on defense. Ryan Saunders ran for a one-yard TD.

When it came time to hand out the trophy, there was no question Gallagher would be the first to get his hands on it.

“I’m speechless, I’m not going to lie,” Jackalous said. “With everything we’ve gone through, we’ve worked so hard for this. I feel like we’re the most deserving people to win this. We’ve put in hours of time for this. It’s raw emotions, as you can tell.”

McCaffery: Garnet Valley’s long awaited title was for their coach, and for each other
District 1 Class 5A Championship: Sam Milligan answers Clancy’s call, Haven wins a title