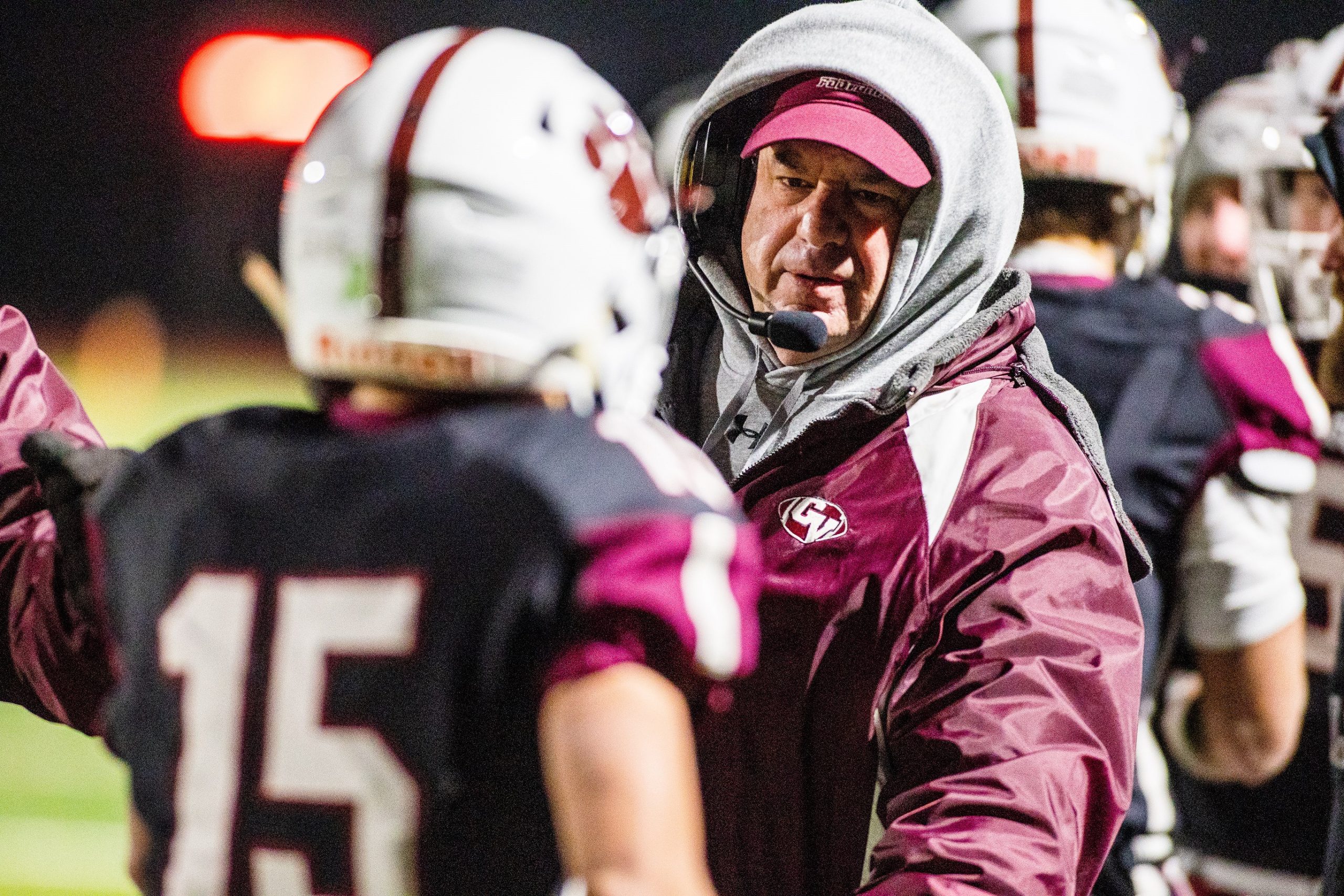 CONCORD — One by one they arrived, then two by two, then in groups of five or six, each waiting their turn to define the moment.

All of them, former players who’d been coached by him over the past 38 years at Garnet Valley High, were there to congratulate coach Mike Ricci for a championship that, in a way, they had all had a role in accomplishing. The Jaguars had just defeated Coatesville, 54-15, for the first and last PIAA District 1 Class 6A championship Ricci would ever enjoy. Next weekend, they will play St. Joseph’s Prep on a neutral field. Next year, Ricci would be retired from coaching.

So it was Friday, the last game at Moe DeFrank Stadium, one way or another, for a Delaware County coaching legend. The post-game scenes, plural, would have their own perfect way of linking the generations.

There were the current players, as they should have been, taking turns with the championship trophy, lifting it over their heads, posing with it in groups – the linebackers, the linemen, the offense, the seniors, the friends.

They were not about to let that go.

Then there were the former players, taking turns surrounding Ricci.

They weren’t about to let that go, either.

Garnet Valley’s Shane Reynolds shares a hug with Jacob Krautzel (77) after the Jaguars wrapped up their win over Coatesville. (Nate Heckenberger – For MediaNews Group)

That after 37 seasons it was all so interwoven best explains how the Jaguars could reach the championship game against a storied program in Coatesville and play so well that the fourth quarter would require speed-up mercy rules. The alumni inspire the players. The players delight the community. The community supports the coaches, all of them, assistants included. The assistants believe in Mike Ricci.

It’s that unbreakable circle that has kept the Jaguars unbeaten for the last two seasons and has them situated to try to win two more playoff games and Ricci’s first state championship.

“We are so happy that we were able to be coached by him,” said senior Joey Halloran after catching two touchdown passes from Max Busenkell. “We know the legacy he has built in this program. We’re unbelievably happy.”

Though Ricci would be coaching his last home game Friday, he had made sure in recent weeks to muffle that theme as much as possible, insisting it was never about him, but about the program. So it was with that dual purpose that the Jaguars – including 36 seniors – grasped the gravity of the moment.

The Jags did that by playing physical defense and trusting an over-supply of playmakers, so dominating their last two games that they only once had to go into punt formation. Willing as they were early, it quickly became clear that the 12-2 Red Raiders just happened upon The Moe on the wrong night.

“We just knew this was going to be a great year,” said senior Zachary Liberatore, who kicked a 45-yard field goal and was perfect on PATs. “They knocked us out the last three times. So we wanted revenge for all the alumni. And we got it tonight.”

The alumni, to be certain, were as thrilled as they were welcome to the post-game celebration. Someday, they will all get together and talk about the night Navy-bound Shane Reynolds rushed for 225 yards and four touchdowns, yet still was able to take the fourth quarter off to soothe some bruises and rest for the state Final Four.

“I was just on the sidelines cheering, realizing how much this means to everybody else,” Reynolds said. “For (Ricci’s) last game at The Moe, to send him off with a district championship, you can’t beat that.”

Ricci began coaching the Jags in 1986, when Garnet Valley was still in Class 2A. He won 3A district championships in 2006 and 2007, when the Jags reached the state championship game. But as the enrollment grew, so did the legend, and so did the level of competition. And after nice playoff runs in 2016, 2017, 2018 and 2019 and an undefeated 2020 season shortened amid coronavirus concerns, the Jags Friday finally won that big-school district championship.

Afterward, as fireworks crackled over a far hill and the stadium had emptied, Ricci remained in character. He was delighted. But he was not emotional.

“You know what?” he said. “Not yet. That will come later. But we still have work to do.”

The current Jaguars deserve that commitment. The former ones would not have expected anything else.