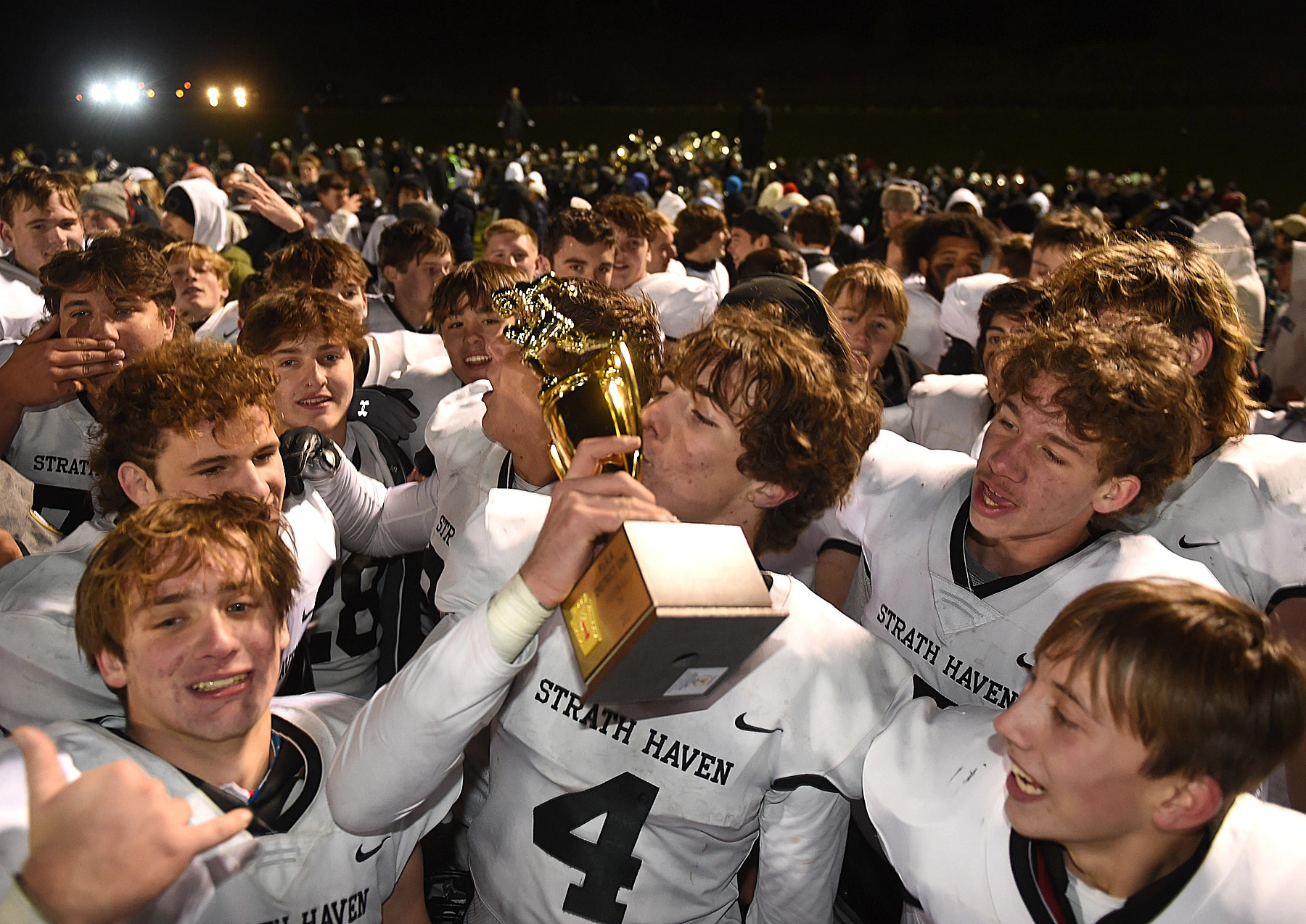 WESTTOWN — No. 2 Strath Haven and No. 1 West Chester Rustin played for the District 1 Class 5A championship Friday night. And, boy, did they deliver. In a game full of twists and turns, it seemed to call for a special ending.

A decision by Panthers coach Kevin Clancy and determination by quarterback Sam Milligan provided just that.

In the second overtime, running back Chase Barlow plunged forward for a one-yard touchdown. The Panthers trailed by a point. Clancy, with a district title on the line, went for the win.

Milligan received the snap under center, faked a handoff, and scrambled to his right. He tucked the ball in and ran as fast as he could toward the pylon. He stretched it over the goal line and was bumped out of bounds. The sideline judge raised two arms in the air to indicate a successful two-point conversion, giving Haven a 34-33 double-overtime championship triumph.

It is the first District 1 title for Strath Haven football since 2010 and the 12th in program history.

“I asked Coach Clancy before the drive, the last touchdown, would we go for two if we needed it and end it right there,” Milligan said. “I didn’t think I was going to have to (dive) like I did. I guess I was slower than I thought and they almost caught me, so that’s when I realized I had to dive.”

Barlow, who finished with 99 yards on the ground, believed Milligan had the speed to outrun the Rustin defenders.

“I had all the confidence that he would get there,” Barlow said. “He knows how to get the tough yards and he is fast.”

Milligan had the option to run or pass. Tight end Mason Green said he wasn’t quite sure where the play was going.

“I thought it might come to me,” he said. “But I’m glad Sam took it himself and got in. That was incredible.”

If Milligan didn’t have a wide-open target right away, he was going to take it in himself.

“It’s a bootleg, a run-pass option. If there’s a guy open in the end zone, he’ll hit him,” Clancy said. “But they backed off and covered a little bit or just enough where Sam was able to keep the ball and run. He got in, by inches.

“This game is right up there with some of the best” he’s ever coached, added Clancy, the winningest coach in Delaware County and in District 1.

Sam Milligan scrambles and gets across the goal line! STRATH HAVEN WINS 34-33. District 1 5A CHAMPS#DELCOFOOTBALL pic.twitter.com/96mFhjIc7S

Strath Haven held a 19-13 lead early in the fourth quarter. On fourth-and-one at the Rustin 35-yard line, Milligan ran a QB sneak but was stopped short. Rustin took over on downs and used seven-plus minutes of game clock to score the game-tying touchdown.

Heralded running back Dayshawn Jacobs, who rushed for 214 yards on 36 carries, scored from two yards out to make it 19-19. All Rustin had to do next was kick the extra point to grab the lead. Kicker Steven Bernard banked it twice, but on each attempt, Strath Haven was whistled offside.

Sure enough, the Golden Knights (11-2) failed to convert on their third try. Jacobs, the placeholder, fumbled the snap and was forced to improvise. Haven stopped him from getting across the goal line. It was a stunning turn of events. Instead of trailing by a point with 16 seconds to go, the Panthers were somehow set to go into overtime.

Strath Haven Anthony Crawford breaks free in the first half of the District 1 5A final as the Panthers defeated West Chester Rustin 34-33 in overtime Friday evening. (PETE BANNAN – DAILY TIMES)

Clancy said he never told his players to jump offside and cause the re-kick. It was the equivalent of icing the kicker with timeouts.

“I wasn’t doing it on purpose,” lineman Ethan Barrar said. “We knew their holder, watching him on film, had trouble with the snap sometimes and we wanted to get to him as quickly as possible.”

“I heard it was purposeful from some players and not from others,” he said. “It is what it is. We won. That’s what matters now.”

The Panthers (13-1) were forced to play the entire second half without one of their senior captains, running back Matt Shuler, who suffered a shoulder injury and did not return. Prior to his exit, Shuler had gained 88 yards on five carries. Haven’s three-pronged rushing attack of Shuler, Barlow and Crawford was without its most dynamic player.

“We know he’s a big part of our team, a huge part of our team, so we all knew we had to pick up the slack,” Barlow said. “I think everyone did their jobs. Everyone played the hardest we’ve ever seen them play.

“It feels amazing to be district champions. We fought through so much adversity, especially after losing Shuler. It just shows that we have heart and that’s a big aspect of our team. We hung in there and ended up winning it.”

Haven’s defense came out on fire and stopped the Golden Knights on a fourth-down run at the midfield. Shuler darted 45 yards on the Panthers’ first offensive snap, and two plays later, Barlow scored the game’s first touchdown.

Rustin had the ball in the red zone to start the second quarter, but Jacobs fumbled it away. Haven’s offense then used five-plus minutes of clock to go 92 yards on nine plays. Barlow leaped over his offensive line at the goal line to score his second TD and put the Panthers in front, 13-0.

Rustin cut Haven’s lead to 13-6 thanks to a touchdown run by Daimon Jacobs. In the third quarter, the Panthers opened the period with a 15-play drive as Milligan scored on a keeper to make it a 19-6 game.