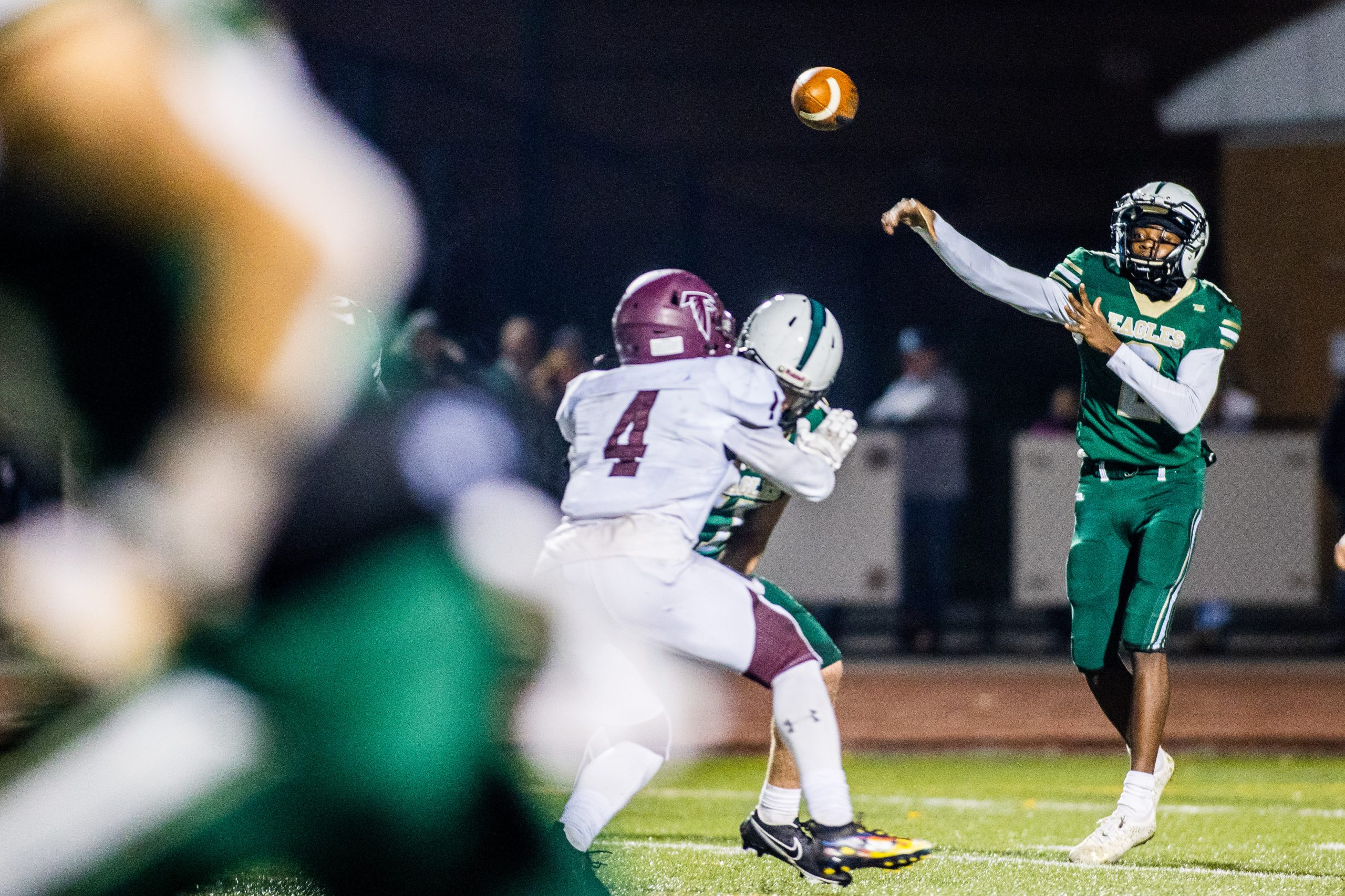 For a Bishop Shanahan team that has turned in some crooked scoreboard numbers, it seemed unlikely that Jordan’s second scoring scamper, a 61-yard slalom through Bonner-Prendergast tacklers, would be the Eagles’ final points.

Had you posed that challenge to defensive end DaKendrick Daniels, though, he would’ve backed his guys to find a way.

“Yeah we’ve got Cooper, we’ve got targets on offense,” Daniels said. “But I think the defense is getting its name out there.”

That’s what the District 1 champs did, pitching a second-half shutout to outlast District 12 champ Bonner-Prendergast, 14-7, at Avon Grove. The win moves the Eagles (10-3) into the state quarterfinals, against District 2 champ Valley View.

The game pivoted on two plays in the final minute of each half.

Bonner-Prendie (9-3) looked set to go into the break down 14-7 and get the ball first when it buried the Eagles at the 15 with 1:13 left. But a botched substitution left Bonner with 10 men, and Jordan exploited the exact empty space with a screen to Colin McGrory. It went for 82 yards, McGrory seeming home free … until Armon Mapp leapt out of nowhere to haul him down at the 3, a true touchdown saver.

Two plays later, with Maurice Richardson flushing Jordan from the pocket, Damir Williams-Bey picked off a pass at the goal line. The difference in halftime mood was massive.

“It was a broken play, so they called the play before we could get set,” Mapp said. “He broke out, and I had to chase him down. God bless that I caught him at the (3)-yard line and us stopping them with Damir getting a pick.”

In the final minute of regulation, Bonner appeared to have the momentum, getting to midfield when quarterback Shane Mulholland hooked up with Answer Saie for 15 yards. Saie appeared to have another catch inside the 30 that Mulholland zinged through the hands of a Shanahan defender. But Saie was flagged for having come back from out of bounds, an illegal participation that set the Friars back 15 yards.

A bad snap two plays later drove Bonner into fourth and 37, from which there was no recovery.

“We were real excited,” Mapp said. “We thought we had it, he got out of bounds to stop the clock. And the refs called it back, and everybody’s heads dropped.”

Shanahan had 274 yards of offense in the first half but just 14 points. Jordan capped a 10-play, 74-yard drive with an untouched 16-yard scoring scamper on the first series. The second required two plays, Jordan’s 61-yarder making it 14-0 lead at 4:37 of the first.

Jordan had 141 rushing yards on just eight carries. He completed only one pass in the second half.

It took a while but Bonner finally got moving when Mulholland hit Mylachi Williams on fourth down for 27 yards to the 7. But it took until fourth and goal to score, faking a Mason Peterson dive for Mulholland to find tight end Austin Cannon on a jump pass.

The teams mostly traded punts in the second half until Zane Domsohm missed a 31-yard field goal in the fourth. Bonner-Prendie responded with a long drive. Mulholland (seven carries, 68 yards) busted a 45-yarder into plus territory, and Peterson powered to first and goal at the 6. But there it fell apart, and on fourth and goal, with Daniels and his bookend Brandon Choi firing upfield, Mulholland tossed up a pass into a unoccupied stretch of Avon Grove end zone with four minutes left.

“We’re never going to break,” Daniels said. “We live by a bend-but-don’t-break mentality. We can have a big play happen, they can get a big run, a big pass down to the 5-yard line or whatever. But we have our brothers and we all know what we have to do, and we stick together.”

Bonner-Prendie had waited a long time for this states chance, after last year’s berth was wiped out by a COVID-19 case. While they didn’t get the result they wanted, the journey was worth it, Mapp said.

“To be here is great,” he said. “Last year it got taken away from us. This year, our team made a great improvement and we brought ourselves this far to the state playoffs.”

Shanahan faces a tough task next week in Valley View. But they go into it having held Bonner to 203 yards of offense, bottling up Peterson to the tune of 18 carries for 63 yards. That’s reason to feel good.

“It feels great,” Daniels said. “Coming into this game, all you heard was about (Peterson) and how good their offense was. So to be able to hold them to seven points and shut them out in the second half, I think that tells us a lot about ourselves.”