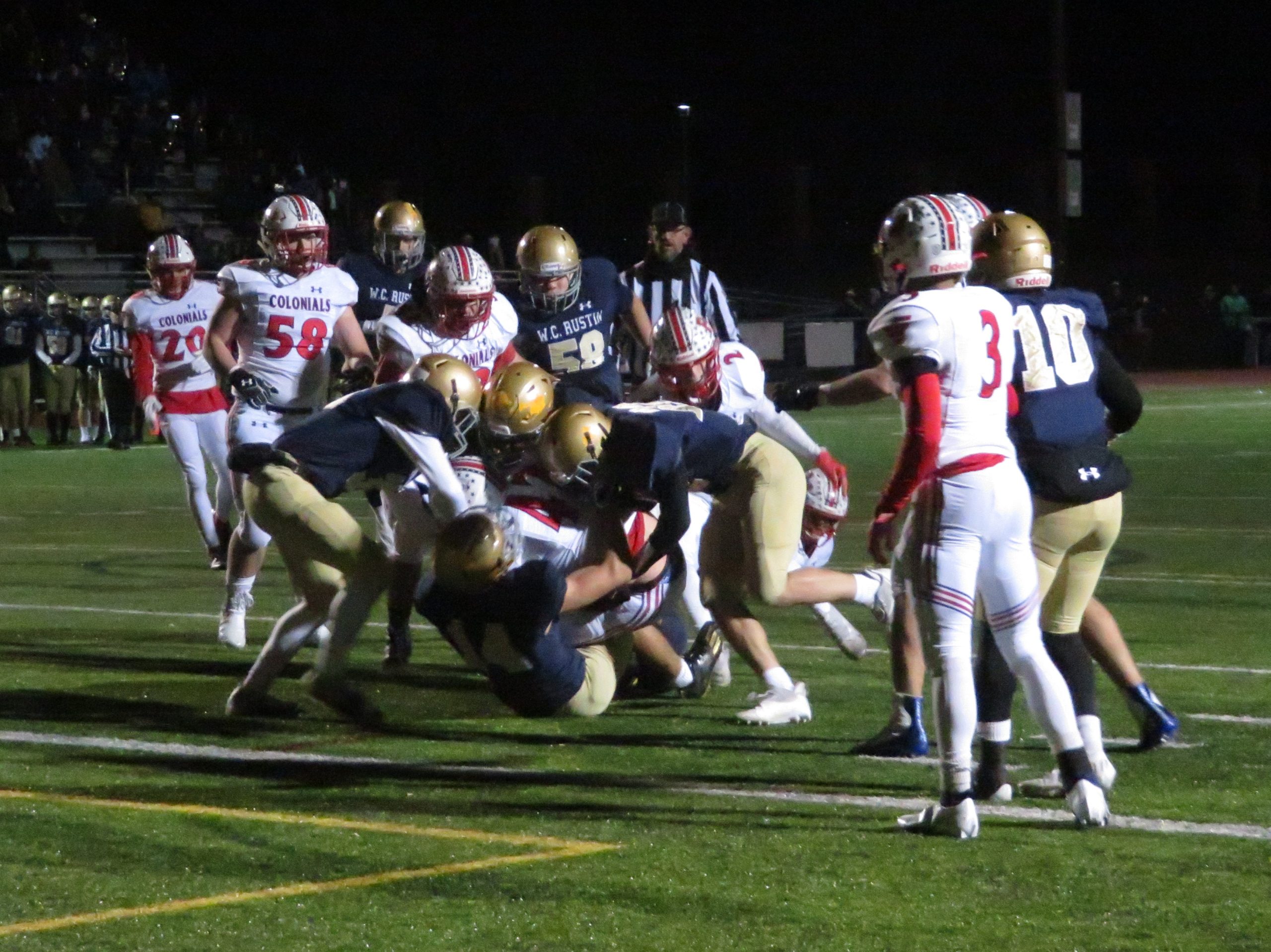 West Chester Rustin had averaged 35.7 points in its first 11 games with the Golden Knights putting up 34 and 41 points, respectively, so far in the postseason.

But their meeting for a spot in the district title game never materialized into an offensive slugfest. Instead the semifinal at top-seeded Rustin became a tight, defensive battle. And it was the final six points that decided the outcome as quarterback Kolbe Freney’s seven-yard touchdown run with 4:38 remaining gave the Knights a 19-14 comeback win over the Colonials.

“And credit goes to Rustin, they run what they do really well, they got an exceptional back, they have an excellent offensive line and lead blockers and a good scheme. And they keep wearing you down.”

In a matchup of run-heavy offenses – PW with its triple-option attack and Rustin’s ground game paced by Dayshawn Jacobs – it became clear early only points were going to be at premium.

The game was scoreless after a quarter with each team reaching the end zone just once before halftime – Rustin leading 7-6 at the break.

“We both had good offenses,” Rustin junior Daimon Jacobs said. “Our offense came out on top and our defense really worked hard. We put it together in practice and then made the plays we needed to make to make the game a win for us.”

The SOL American Conference champ Colonials – who had limited opponents to 15.4 points per contest – tried their best to contain Dayshawn Jacobs but the standout back put together another strong district performance. The senior had 24 carries for 193 yards and two TDs – scoring from 12 yards in the second quarter then crossing the goal line from five yards out in the third.

Dayshawn Jacobs has collected a combined 655 rushing yards in Rustin’s three District 1-5A tournament games, going for 137 yards and three TDs on 14 carries in the first-round win over Interboro then compiling 325 yards and six touchdowns on 36 yards against Kennett in the quarterfinals.

“We knew what we had to do, we knew Number One (Dayshawn Jacobs) he could bounce, switch the field real quick,’ PW senior running back/defensive back Chris McLaughlin said. ‘And I feel like we did a pretty good job compared to these other teams they’ve played. We kept him kind of under control, kept him to a minimum open field and, yeah, just not enough.”

Rustin finished with 286 total rushing yards on 44 carries while holding Plymouth Whitemarsh to a total of 114 yards on 34 carries.

‘It’s almost impossible to shut it down,’ said Rustin coach Mike St. Clair of the Colonials’ option offense. ‘We had to commit to playing assignment football and we did it for the most part tonight. We had two busted plays and they were able to capitalize on it but we responded and we were able to do a good job tonight.”

Plymouth Whitemarsh was just 3-of-12 passing but two of those completions went for touchdowns. In the second quarter Phil Taormina hauled in a 22-yard pass from QB Aiden O’Brien in the end zone on fourth down. Then in the third Taormina was open downfield on a running back pass from McLaughlin for a 65-yard score at 6:24.

The Colonials’ successful two-point conversion after Taormina’s second TD put them up 14-7 but the visitors could not add to their total the rest of the way. The 14 points were the first time this season the Colonials were held under 20 points, their fewest before Friday coming in a 21-13 win over Cheltenham Oct. 8.

“I think they’re pretty physical and athletic on their defense,” Chang said. “They did some things there where (they) gave us a little trouble and I think we just faltered on a couple of drives there, got ourselves in a little bit of trouble.”

With Rustin trailing 14-13 in the fourth, a Jacobs’ 52-yard punt pinned PW down at its own one. The Knights’ defense – who came in giving up 11.9 points per game – proceeded to force a three-and-out and Rustin got the ball back 45 yards from the end zone. Freney capped the following possession by plowing in from seven yards out with less than five minutes left to make it 19-14.

On their final drive, the Colonials tried to hit the running back pass one again but Rustin defensive back Daimon Jacobs was ready for it, coming up with an interception near the sideline for the game’s only turnover.

“I kind of read it from the start after they hit us with the first one,” Daimon Jacobs said. “So I made sure I was staying back and just playing good defense.”

The 19 points was just the third time in 12 games this season West Chester Rustin was held under 20 points but by slowing down the Colonials it was enough for the Golden Knights to reach the District 1-5A final for the third time in four years.

Rustin lost to Upper Dublin in both the 2018 and 2020 title games but are out to finally claim the crown when it hosts Strath Haven, a 34-6 winner over Academy Park in the other semifinal.

“Both teams can put up points but both teams also have very good defenses,” St. Clair said. ‘And they did what they did to shut us down – we had to do what we did to shut them down. It was just a great football game tonight, could of went either way.”