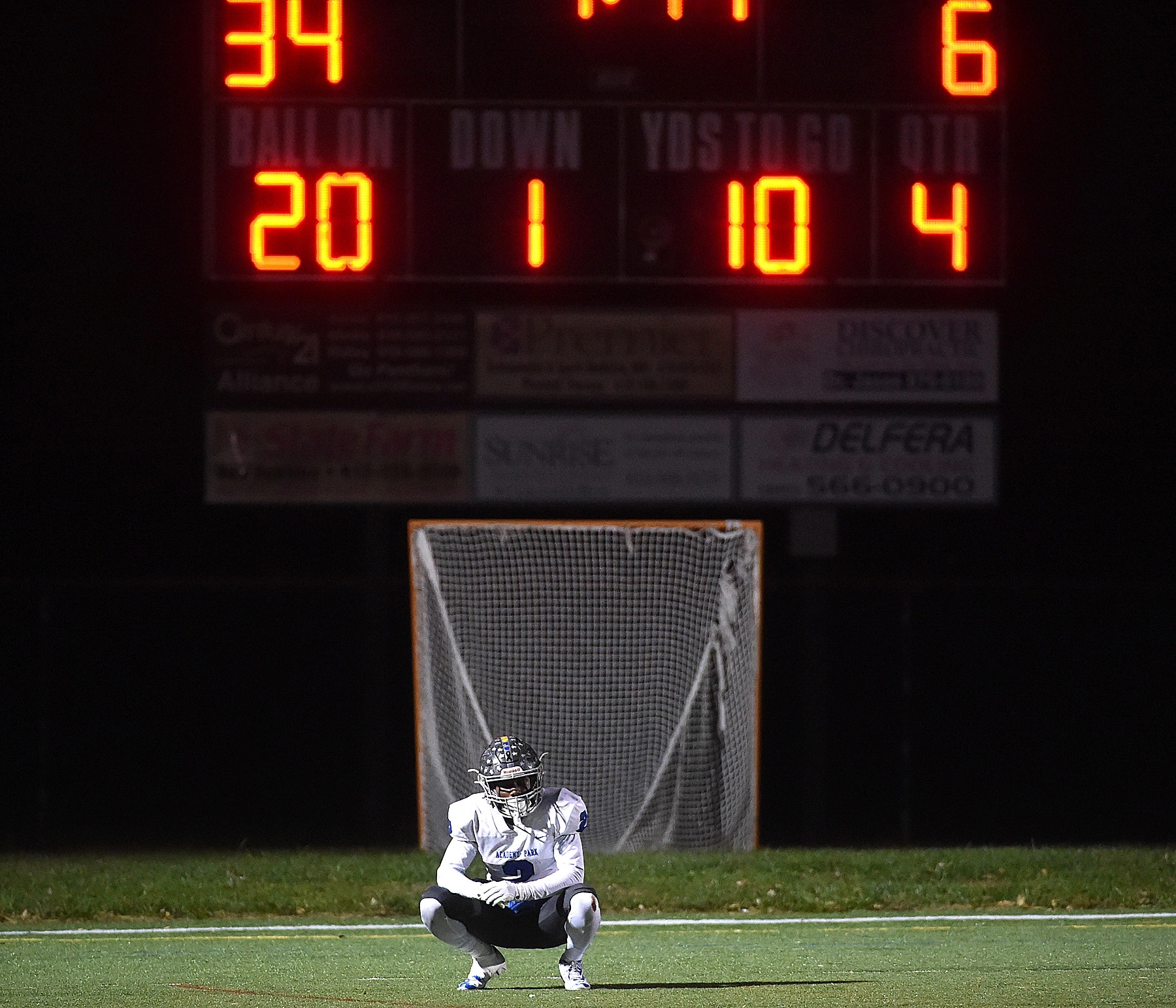 NETHER PROVIDENCE — A few players hung their heads as Academy Park coach Jason Vosheski addressed the team following Friday’s 34-6 loss to Strath Haven in the semifinal round of the District 1 Class 5A playoffs.

Most of the Knights, though, stood tall despite the loss that brought their season to an end.

“Hold your heads high,” Vosheski told his team. “You have nothing to be ashamed of, nothing at all.”

It was a season full of adversity for the Knights (9-3). It began with the tragic shooting death of Fanta Bility outside of Knight Park following an opening night victory over Pennsbury. Out of safety concerns, AP played its next seven games on the road, nine away from home in all. The Knights didn’t have a home game until they defeated Chester on Oct. 30. And that game, as well as the playoff opener against Oxford, was played on Saturday afternoon.

Yet through it all the Knights persevered to win a share of the Del Val League title and get to the district semifinals for the third time since 2015. They had to erase a 13-point deficit to beat third-seeded Unionville on the road last week to make the Class 5A final four.

“I can’t even imagine what they had to go through,” Strath Haven coach Kevin Clancy said. “We’re watching film and I don’t think they ever played at home. They were playing road games the whole year and they just kept getting better and better. You could see the growth they had in their team. They had a lot of adversity and they deserve an awful lot of credit.”

In the end, though, the Panthers (12-1) were just too much for the Knights. Strath Haven wore Academy Park down with its balanced Wing-T running attack that chewed off large chucks of the clock, while the Strath Haven defense kept AP’s explosive offense in check.

The Panthers ran for 293 yards on 37 attempts, an average of 7.9 yards per carry, while the defense held the Knights to 93 yards rushing and 203 yards of total offense. AP also turned the ball over three times and was penalized eight times for 37 yards. One of those penalties wiped out an 88-yard touchdown run by Terrence Oliver, who eventually scored on an eight-yard run in the second quarter to cut the deficit to 7-6.

That was as close as the Knights would get.

“The thing with the Wing-T, if you’re good at it, and they’re very good at it, you need guys to play above their level to stop it and not just one guy or two guys, you need multiple guys,” Vosheski said. “We couldn’t do that on defense and then on offense we couldn’t stay on the field.”

Yet the Knights walked off that field with their heads held high.

“This is a good group of guys,” Willis said. “They balled out, did what they had to do all season, to get this far. I’m proud of them.”