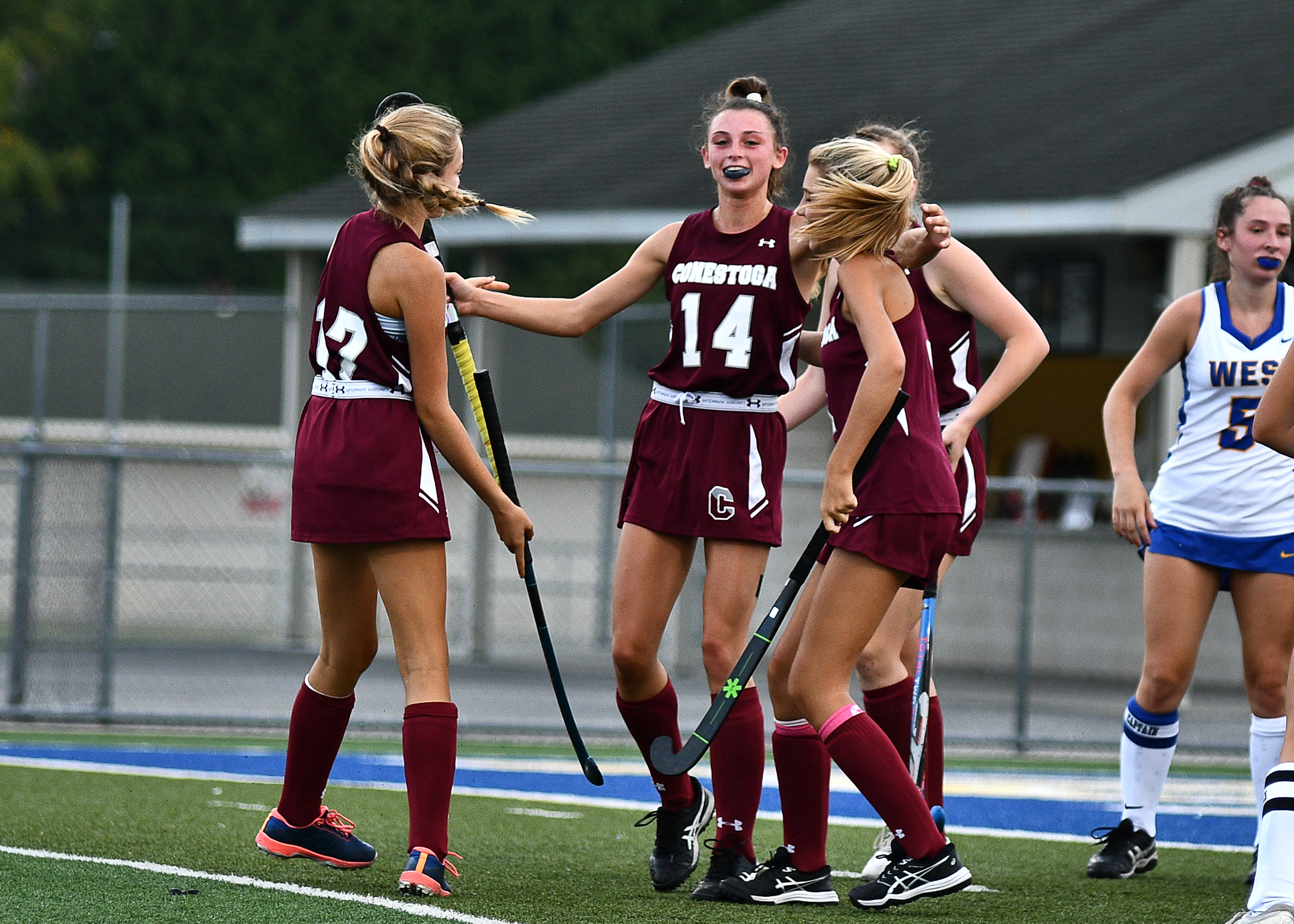 DOWNINGTOWN—It may have just been an early September, non-league game, but over the past half a dozen years or so, Conestoga and West have built quite a rivalry in field hockey. More than a handful of games were decided in overtime, and more often than not, the teams would meet again deep in the District playoffs, with lots more on the line.

Wednesday evening at West’s Kottmeyer Stadium, the two teams squared off for the Pioneers second game, and West’s first game of the season. This time around, it was Conestoga (2-0) that left the field with a victory, staving off a furious second half comeback bid by the Whippets (0-1) to come away with the 3-2 win.

“The last time we played, they knocked us out of the district tournament, so this was a little redemption for us,” said Conestoga coach Regan Marscher. “This was a whole team effort from our forwards all the way through our goalie. It’s a nice starting point for us.”

The Whippets got on the board first, barely two minutes into the contest, when Carly Smith found Ciarra Margetich with an open shot on goal, and Margetich slammed it home for a 1-0 Whippet lead.

But it didn’t take long for the Pioneers to answer back. Just past the 11:30 mark in period, the Pioneers forced a penalty corner, and converted, with Maggie Carson finding the back of the cage for the equalizer.

“I was really proud of the way the team responded there,” said Marscher. “When West scored so quickly like that, it would have been easy to get down on themselves. But no one panicked, and just got back to doing what we needed to do.”

‘Stoga notched the next two goals unanswered, with junior forward Kate Galica coming through with a goal just seconds into the second quarter, and again early in the third.

“It’s a brand new season, with a bunch of new starters, and this is a great way to get us going,” said Galica. “We’re only just getting started and I think we’re looking really good together. Everyone is unselfish, and we are making the kinds of connections we need to make, especially so early in the season.”

Following Galica’s goal, the Whippets began to find their rhythm, and put serious pressure on the Pioneer defense for the remainder of the game. Midway through the fourth, Carly Smith took a shot on goal, and Conestoga was called for a foul. West was awarded a penalty stroke, and Margetich made it count, cutting the lead to 3-2, with a little over six minutes remaining. But though West had some shots, and forced a few more corners, the next goal never came.

“Our defense was really good today, “said freshman midfielder Lexi Patterson. “Playing teams as good as West is this early, it’s great to get the win. It felt especially good because it was truly a team win—from the forwards, mids, defense to our goalie, we all played really well today.”

West can’t dwell on the loss. The Whippets have to simply learn and move on. The quest to win another Ches-Mont title kicks off on Thursday, when West travels to Avon Grove for their first league game of the season.

“I think the nerves got us a little,” said West coach Stephanie Bullock. “We haven’t played outside our league in two years. We always have a tough schedule, but starting with Conestoga is no easy task. But we definitely picked up the pace and played much better in the second half—our restarts were a lot quicker. When we step up and use our speed—we’re a strong team. But Conestoga made inside out passes really well, and just wanted it a little more.”