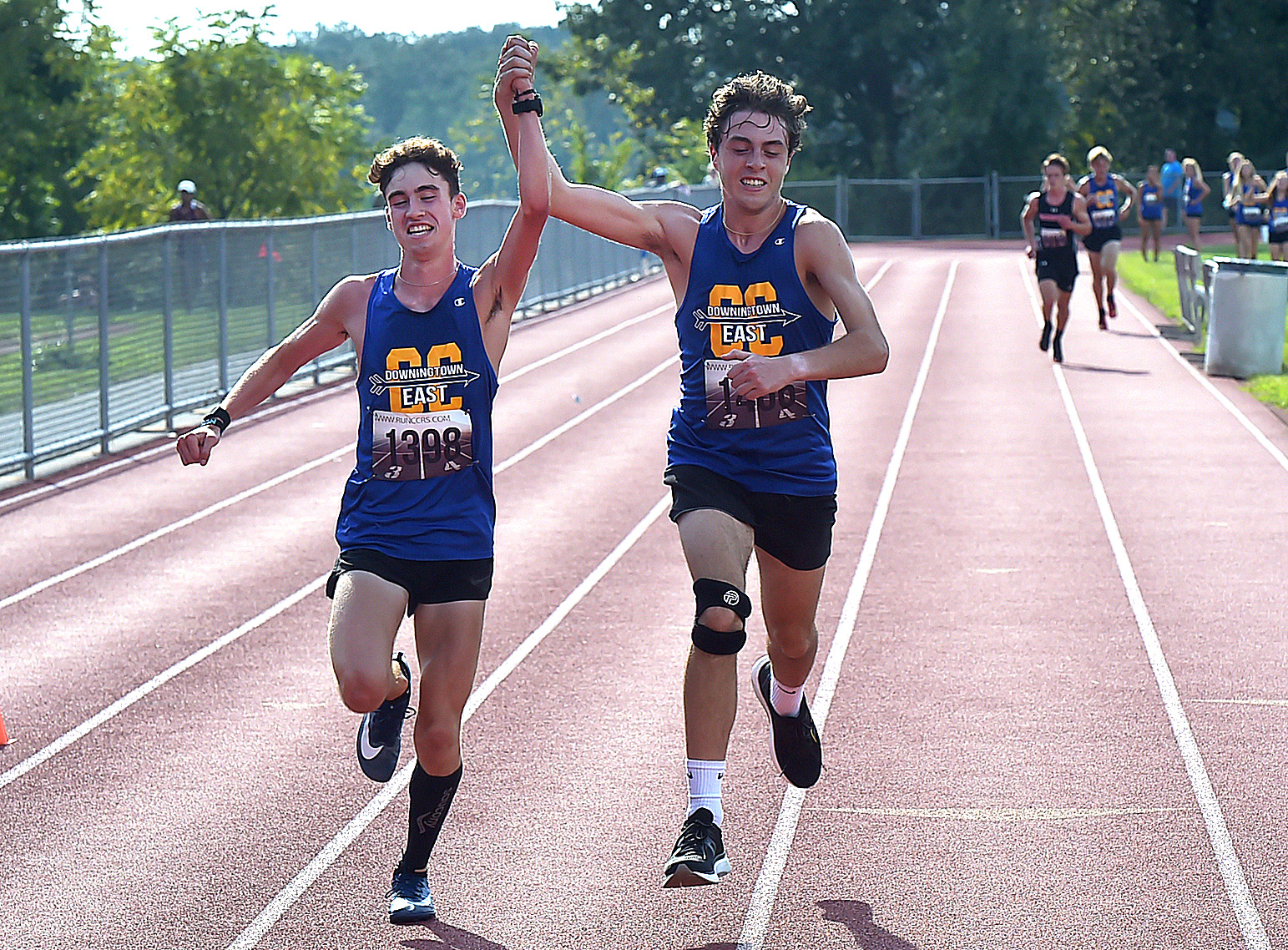 Uwchlan >> Following the Ches-Mont National Super Meet at Downingtown East Wednesday afternoon, a Senior Night celebration was held at the school for the seniors on the Cougars’ cross country teams.
Downingtown East seniors had reason to celebrate during the meet as well. Cougar seniors Brendan Flynn and Caiden Leen finished 1-2 in the boys’ race, and as they crossed the finish line, side by side, they joined hands and raised their arms in a mini-celebration.
“This is great,” said Flynn. “It’s Senior Night and our only home meet this season.”

Flynn posted a winning time of 11:11.08, while Leen clocked 11:11.14. Both Flynn and Leen were District 1 medalists last fall, and both received second team All-Area cross country honors from the Daily Local News.
The Downingtown East two-mile cross country track features several hills, which proved to be a challenge in Wednesday’s humid conditions.
“I love running here, because this is where we do all our workouts,” said a smiling Leen. “Once you get used to the hills, they’re not hard anymore, they’re fun. It’s nice to finish 1-2 on Senior Night.”
Downingtown East easily finished first in the boys’ race among the four schools in the Ches-Mont National Super Meet, finishing ahead of second-place Coatesville, third-place Avon Grove and fourth-place Downingtown West.
The Cougars had seven of the top 10 finishers in the boys’ race, and three of the top four – Flynn, Leen and senior James Smith (fourth place). Smith was a District 1 medalist last fall.
Other D-East top finishers in the boys’ race Wednesday were senior Chris Walsh (sixth), senior Luke Barcalow (seventh), junior Ryan Christman (ninth) and senior Ben Leandri (10th).
Coatesville’s Josh Miller, who placed third in the boys’ race (11:11.97), said, “I thought I did pretty good. It was definitely a little hot today, which made it a little difficult, and the course was kind of hilly. The hills weren’t very long, but they were definitely steep.”
There will be additional Super Meets featuring Ches-Mont cross country teams this fall. Wednesday’s runners enjoyed the four-school Super Meet setup at D-East.
“I like these Super Meets better than the dual meets, because it’s more of an exciting environment,” said Miller. “There’s more people, more spectators at the Super Meets.”
“I really like these Super Meets, there’s a lot of good competition with the other teams as compared to the one-on-one dual meets,” said Avon Grove senior Annika Pfaff, who placed third in the girls’ race.
In the girls’ meet Wednesday, Downingtown East finished first in the team competition with 30 points, ahead of Downingtown West (46), Avon Grove (52) and Coatesville (114). The Cougars had seven runners among the top 15 finishers.

In the girls’ individual competition, Downingtown West junior Carolyn Tarpley finished first (13:28.84).
Tarpley, who placed fifth at Districts last fall and has been called “a fierce competitor with lots of grit” by D-West coach Scott Burns, said, “I feel good, it was good to get a good two-mile run in. I’m happy with where I am right now.”
Downingtown East freshman Emily Steinberg placed second in the girls’ race (14:01.54). This was the second cross country meet of her Cougar career; the first one was last Friday in a dual meet against Great Valley, where she placed third.
“I feel good about my time today,” said Steinberg. “It was hot today, so it was kind of hard [running], but it was fun.”
Many of the runners treated Wednesday’s meet as a tempo run, in preparation for the upcoming Unionville 2 Mile Bash to be held Saturday.
“I think today was more of a tempo run, but it was definitely hard; the hills out there made it challenging,” said Tarpley. “The heat and the hills burned my legs a little bit (laughs), but it was a fun course.”
Pfaff, who enjoyed a stellar 2020 cross country campaign, finishing fifth at the Ches-Mont Championships, 15th at the PIAA District 1 3A championships, and 36th at the PIAA 3A state championships, said, “We used today as a training day; it was kind of a tempo run. This is a very hilly course, a tough course, but I think it’s really good for training, super-good for our bodies. I think because the course was only two miles, it wasn’t awful, it felt good (smiles).”
Pfaff’s younger sister Ava, a sophomore, finished fourth in the girls’ race Wednesday.

“I feel pretty good about my performance, today was supposed to be a tempo run,” said a smiling Ava Pfaff. “My sister and I work together, to push each other – my sister was my source of motivation [today], she’s always pushing me to be the best runner I can be. I attribute a lot of my strength and love of running to her.
“I felt like we [Avon Grove] all had a good pace going today. There are a couple of difficult hills on this course, but you’ve got to push through them, and you feel great afterward.”
The remaining top 10 girls’ runners Wednesday were D-East senior Melanie Taylor (fifth), Downingtown East junior Keira Moser (sixth), D-West junior Paige Oskison (seventh), D-East junior Keira Morrin (eighth), Downingtown East freshman Jocelyn Moser (ninth) and Avon Grove senior Jade Barrett (10th).