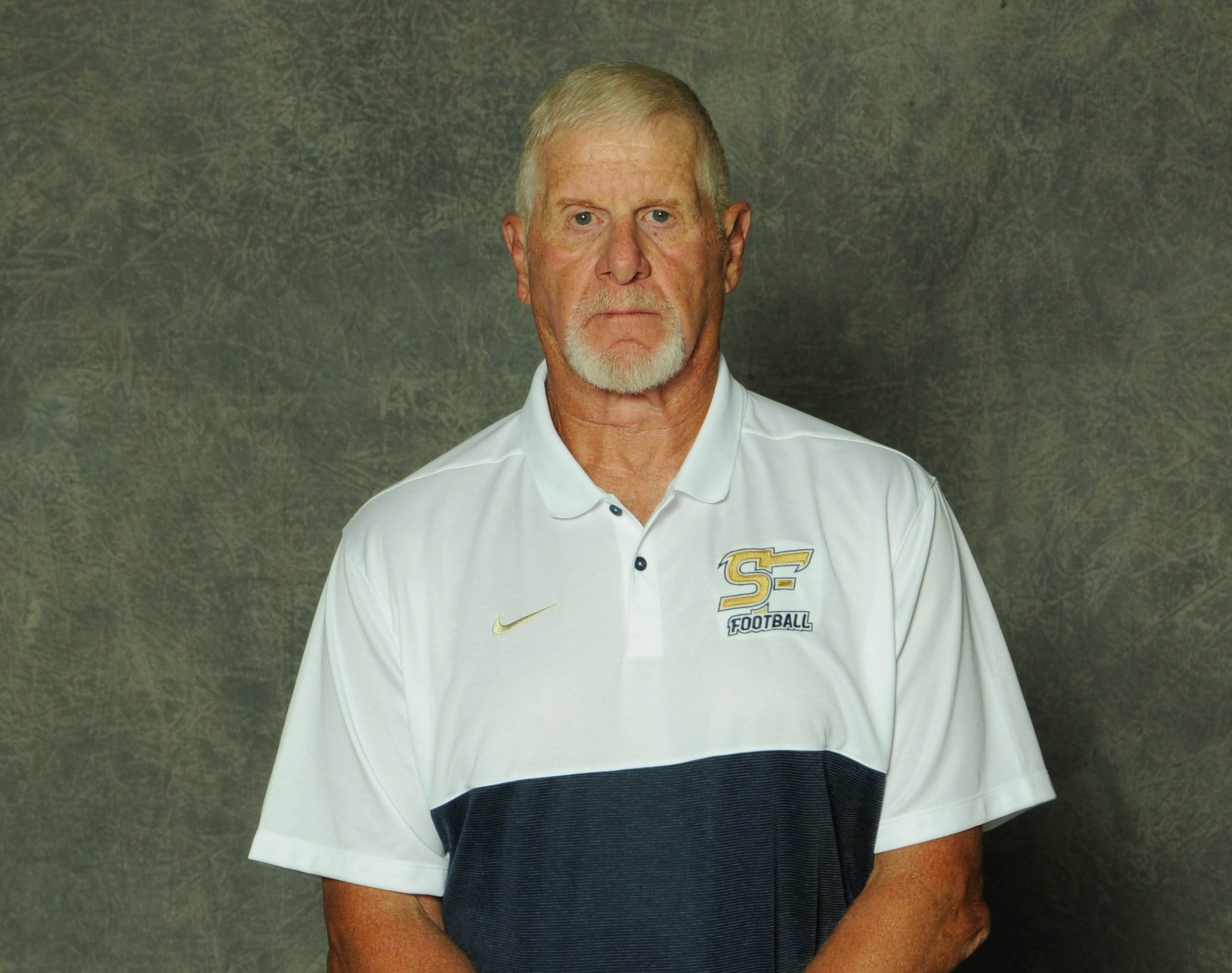 The last weekend in May will be a banner one for Spring-Ford’s football program.

Four Rams will be accorded various honors at the state level, in a time frame whose primary focus will be the nation’s annual Memorial Day observance. Assistant coach Steve Schein will be inducted into the Pa. State Football Coaches Association Hall of Fame Sunday (May 30), and three Spring-Ford players will be playing in the East/West All-Star Game’s big-school (PIAA Classes 4A to 6A) contest at Central Dauphin High’s Landis Field in Harrisburg that same afternoon.

“We take pride in this,” SF head coach Chad Brubaker said of his team’s level of representation in the state. “It’s post-season honors based on reputation.”

Schein’s reputation, in a coaching career that comes close to the half-century mark, has been that of a person stressing the aspects of teamwork — winning gracefully, losing graciously — finishing something one starts, and discipline to his players. Those credos are at the foundation of a coaching resume marked by more than 100 victories in 17 years heading the grid program at Upper Merion beginning in 1983, and the numerous other seasons since 1973 where he assisted other teams in the Southeastern Pa. region … 26 of them at Spring-Ford.

“One of the things about Steve is, he’s always been attending clinics,” Brubaker, the person who nominated Schein for the Hall of Fame, said. “He’s current in terms of safety and schemes.

“There’s a tendency for guys who are older, who have been in a system for some time, to stick with what’s there. Steve always stays current.”

As Schein’s nominator for the Hall of Fame, Brubaker cited such criteria for selection as (1) serving as a head coach for at least 15 years and (2) having won 100 or more games. Success in terms of league and playoff competition is also considered.

Schein met those criteria during his time at Upper Merion High School. He won 117 games (record 117-70-6), four Suburban One American Conference titles, had a number of District 1 playoff qualifications and was a three-time Coach of the Year. He also served twice as head coach for the Montgomery County All-Star Football Game.

He recalled being approached by Upper Merion administrators about becoming the head coach at the school, on the occasion of the luncheon for the 1983 Montgomery County All-Star Game.

“They liked what I stood for,” he said. “The superintendent told me just to treat the kids fairly.”

After retiring as the Vikings’ head coach in 2000, Schein returned to UM — at the time considered a top program in the region — for a two-year stint as defensive coordinator under then-head coach Andy Toto. He then came back to Spring-Ford, where he served seven years on Gary Rhodenbaugh’s staff as a defensive and offensive coordinator before becoming an assistant on Brubaker’s staff.

“I’ve worked with great assistants and outstanding players,” he said of his time at Spring-Ford. “Guys like Hank Bernat (Owen J. Roberts) and Jim Mich Sr. (St. Pius X) … I learned a lot from them.”

Schein was active in other athletic programs at Spring-Ford in his first 10 years there. He was head coach of the wrestling team three seasons in the early 1980s and assisted on the track and field team.

Steve’s involvement with the community’s youth was marked by his founding of the Spring-Ford Youth Football and Cheerleading program in the 2000s.

“I didn’t understand why there was no football in the community,” he recalled. “The Spring-Ford Youth Cheerleading grew to be one of the top programs around.”

Schein’s own involvement in football dated back to his time as a 10-year-old participant in Pop Warner, middle school and high school (Levittown’s Woodrow Wilson High Class of 1969). He went on to the then-West Chester State College, where he played the sport at the freshman and varsity levels while attaining BA and M.Ed degrees in Health and Physical Education.

“I considered myself an average player,” he said, “but I loved playing the sport. I knew back in eighth grade I wanted to coach.”

Though giving the perception of having an intimidating personality, Brubaker sees another side to Schein’s demeanor.

“I think, as he’s gotten older, he has a huge heart,” he said of Schein. “He’s ultimately a softie, but he demands a lot from the players. When he gets animated and stern, the kids take notice.”

It’s a personality molded by Steve’s mindset about the foundation of the sport.

“Football is the ultimate team sport,” he noted. “There’s a role for everybody. One person can’t win a game.

“Some of my best teams had 11 good players who worked hard, stuck together and showed teamwork. And you never quit. I believe if you start something, you finish it.”
That aspect of Schein’s life was tested 4-1/2 years ago when he suffered a serious neck injury at home. He underwent surgery at University of Pennsylvania Hospital and rehabilitation at Bryn Mawr Rehab, driven by a desire to resume his coaching activities.

He’s now taking a step-by-step approach to his long-term involvement.

In one instance, two were chosen. But Spring-Ford has leaped a higher bar this year by having three players named to participate in the East/West action being held the weekend of May 29-30 at Central Dauphin High School.

Kyle Kennedy, Nick Teets and Nate Capers will represent the Pioneer Athletic Conference champions in the 4-6 game. In a first for the game there will be East/West All-Star contests for big and small schools; the three highest classifications (4-6) will be in one, the three lowest classifications (1-3) in the other.

“They don’t go by stats, but by ability,” SF head coach Chad Brubaker said. “More kids will be able to play, and be recognized. It’s hugely positive for Pennsylvania.”

Kennedy, who plans to walk on Drake University’s football team after graduating high school, has served as Spring-Ford’s center and long snapper for three years.

“He’s done a great job,” Brubaker said of Kennedy, who also competes on the school’s winter and spring track programs. “He’s a smart kid who knows the fronts and makes line calls. It will be great to see what he can do.”

A Mercury All-Area second team offensive lineman in 2019, Kennedy was an All-PAC and All-Mercury selection in 2020, as well as Pa. Football News’ Class 6A long snapper. He is a Spring-Ford TD Club Wall of Fame qualifier from the Class of 2021.

Teets will be going on to play men’s lacrosse at Monmouth University. But his athletic versatility was demonstrated by his play as a wide receiver and defensive back in football.

“He’s a testament to the value of being a multi-sport player,” Brubaker noted. “I like having kids who play more than one sport.”

Teets is coming off a 2020 season that saw him catch 28 passes covering 412 yards, an average of 14.7 yards per reception. He was selected to the PAC All-Liberty team as a defensive back and wide receiver, as well as the PAC’s Liberty Most Valuable Player.

He was accorded similar honors on The Mercury All-Area team: Wide receiver, defensive back and Player of the Year.

Like Kennedy, Teets is a Spring-Ford TD Club Wall of Fame qualifier from the Class of 2021. For his career, he ranks fourth in receptions (85) and receiving yards (1,086) and eighth in receiving touchdowns (10).

The development of his gridiron skills has resulted in Capers receiving a partial scholarship to Bloomsburg University to play for the Huskies’ NCAA Division II program. The 6-foot-3 cornerback had 55 tackles (four for loss) and two interceptions in a 2020 season that saw him named a second-team defensive back on the PAC’s All-Liberty, Mercury All-Area and Pa. Football News second teams.

“He’s tall, lanky and comes up to make plays,” Brubaker said of Capers.

Both games will be played Memorial Day Weekend (Sunday, May 3) at Landis Field the Central Dauphin School District’s Landis Field in Harrisburg. They will be played in conjunction with the annual Big 33 game, the first at noon (small school) and the second at 5 p.m. (big school).

“Post-season honors are based on reputation,” Brubaker, a head coach for the game in 2017 and 2018, said. “It’s the purest recognition, being evaluated by coaches across the state.

“It shows they’re coached the right way. It’s a big honor to compete against the state.”