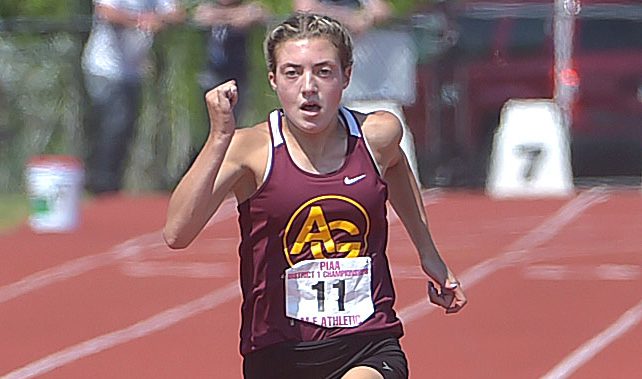 Although the weather was cold and wet at the PIAA Class 3A Track & Field Championships Saturday at Shippensburg University, some of Chester County’s athletes felt a particularly warm glow when it was over.

For Avon Grove senior Molly O’Connor, it was a memorable day. O’Connor finished second in the girls 100 meter dash, with a PR clocking of 12.09, and placed third in the girls 200 meter dash (25.01), breaking her own school record time.

This was O’Connor’s first time at States, after missing qualifying as a sophomore in the 200 by just two places.

“It was cold and misty today, which I like – I’d rather it be cold than hot,” said O’Connor. “It feels awesome to finish second in the 100 at States after being ranked eighth, and breaking my school record in the 200. I’ve never been more proud.”

O’Connor, who will run track for College of the Holy Cross, is the daughter of Avon Grove girls basketball head coach Bart O’Connor.

“Molly is one of the easiest athletes I’ve ever had to coach,” said Avon Grove track coach Eric Broadbent. “What separates her from a lot of other talented individuals is all of the little things she does that often go unnoticed. She eats right, gets good sleep, keeps relaxed and even has a smile on her face before big races. She is also very receptive to feedback and motivated to be the best version of herself without comparing herself to others. She’s just an amazing person.”

Another Chesco girl who shone brightly Saturday was West Chester Rustin sophomore Ava Alexander, who finished first in the girls triple jump with a mark of 38-09, ahead of runner-up Shannon Mullin of State College (38-01.25).

Alexander also finished 15th in the girls long jump at States (16-09.50), and helped the Golden Knights finish seventh in the girls 4×100 relay at Shippensburg.

Mulhern said, “Pennsylvania is an extremely competitive state so I am grateful to have come away with a second place finish against a lot of very talented athletes, although I did not have my best performance today. The conditions were pretty rough. It was cold,rainy, and windy. I was far off of my best time so I was a little disappointed.

“I was super excited that my team qualified in the 4×800 meter relay so I was able to compete with my team. They all ran so well and it was fun to be in my first states relay race.

“Overall, I was so happy to just be racing at states after having the entire season canceled last spring. I’ve definitely learned to not take these experiences for granted after everything that has taken place over the last year.”

“I feel good about my performance today,” said Barnhill. “I think Martin and Long had really good races today. They are tough guys to beat and Pennsylvania’s depth this year is crazy, so it feels great to get third in such a stacked field. I was happy with my time of 8:59.57, especially because it was cold and rainy.

“It’s always special to break 9:00 at the state meet, and in most years I’d probably place better, but it’s super great to have a field like that. Especially Devin Comber [who was fourth] because we’ve always had some great races on the district and state level. I’m just excited to start training again and push myself even more than I have and really get to that next level.”

Other performances by Chester County athletes at the PIAA 3A track & field state meet were as follows:

Coatesville tied for 13th place in the boys’ team competition, and had a couple of fine performances in the boys’ relays.

“Our coaching staff is so happy about our performances this weekend,” said Coatesville boys track coach Damien Henry. “All the practices and hard work since November of 2020 paid off today.”

Red Raider junior Lebron Bessick, who finished third in the boys’ 200 meter dash with a clocking of 21.68, was part of two Coatesville relay squads that placed in the top six.

Coatesville finished sixth in the boys 4×400 relay (3:24.69), with a quartet of junior Dave Kelly, senior Justin Reed, Bessick and Stewart.

Unionville had a couple of top-four finishes in the pole vault events. Senior Meghan Hart finished third in the girls pole vault with a mark of 12-0, and senior Jack Miles placed fourth in the boys pole vault (15-0).

The Golden Knights had some fine finishes among the boys, too. Senior Drew Gallen, who tore his ACL during football season last fall, finished seventh in the boys 100 meter dash (10.96) Saturday at States. Golden Knight senior John Shallo placed sixth in the boys shot put, with a mark of 52.08.50 and junior Dayshawn Jacobs placed 19th in the boys long jump (20-02.75).