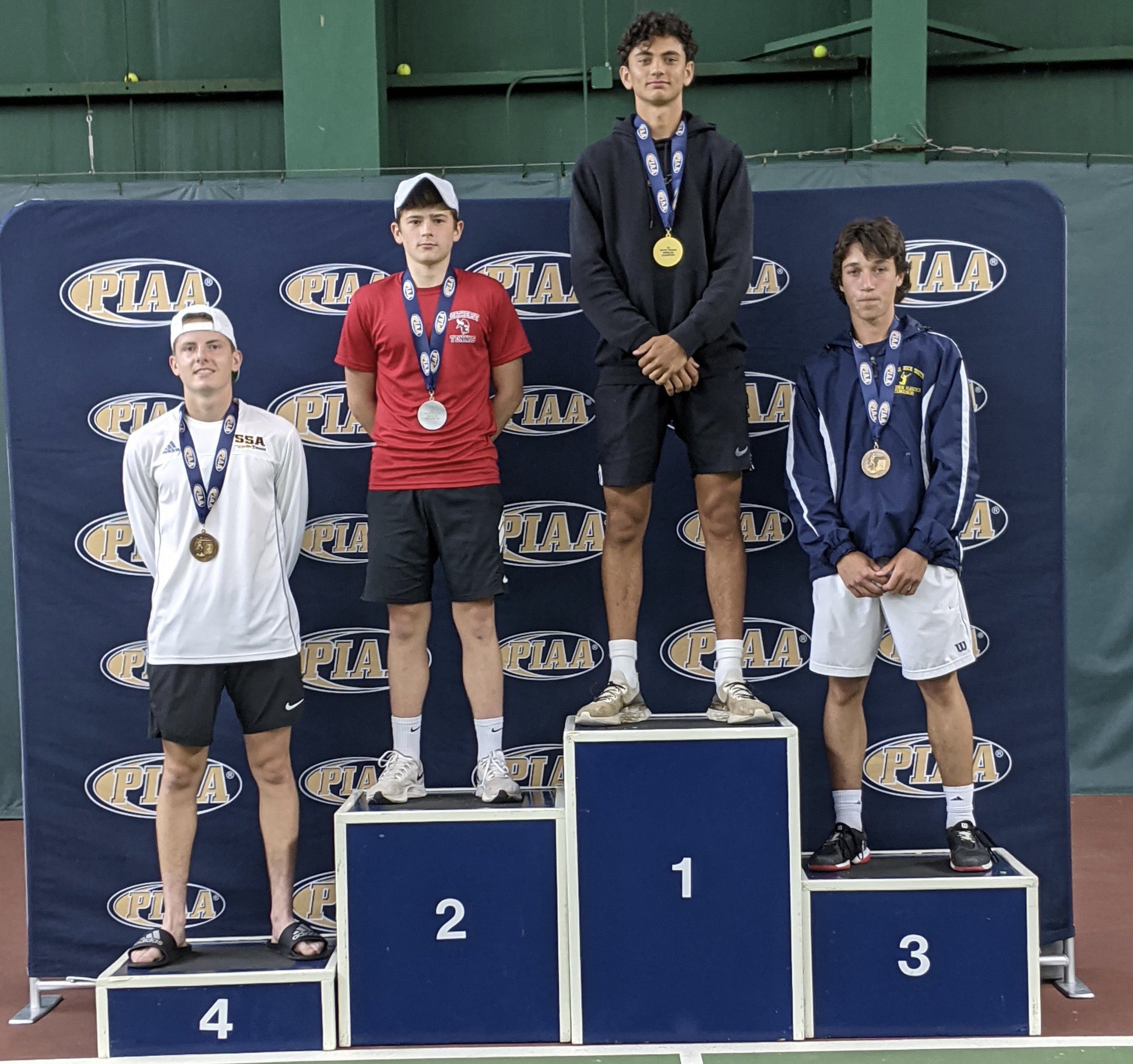 When Lower Merion senior Vikas Miller captured the PIAA 3A boys’ tennis state singles title at the Hershey Racquet Club May 29, he was most impressed by the Aces’ fan support.

“What I will remember most about the final match is all the people that came out to support us – it was an amazing experience competing for the state singles title while [Lower Merion’s] Brian and Justin Yi competed for the state doubles title on the court next to me,” said Miller. “The energy in the building was amazing and. I could feel how locked in we all were. It was great to be able to contribute the state singles title to our team’s amazing year.”

The Aces had compiled a 24-0 record during the season and won the PIAA 3A state team title.

On May 29, Miller defeated Northeast High School junior David Mamalat, 7-5, 6-1 in the PIAA 3A state singles championship finals. Miller believes it was his best match of the 2021 spring season.

“Coming into the final, I knew David would be my toughest opponent all year, so I was prepared for a competitive, high level match,” said Miller. “From the start we were both locked into battle and playing great tennis. I held that same level of focus from start to finish.”

In the PIAA 3A state singles quarterfinals one day earlier, Miller came from behind to defeat District 6 champion David Lindsay, 3-6, 6-4, 7-6 (5). He then beat Shady Side Academy senior Colin Gramley, 6-2, 6-3, in the semifinals.

“Throughout almost all of the tournament, I consistently found a way to fight back when I was down in games and stayed very strong mentally,” said Miller. “In the final, that trust I had in my ability to fight for every point no matter the score helped me play confident, smart and aggressive tennis.”

Lower Merion tennis head coach Harris Mailman is impressed with the work ethic of Miller, who will attend the University of Notre Dame in the fall.

“Almost every time I went to hit with friends at the Lower Merion tennis courts, I saw Vik practicing,” said Mailman. “He’s a relentless competitor and very much like a second coach, always willing to help other players during practice.” Lower Merion’s Justin and Brian Yi take the top step of the state medal stand after capturing the PIAA 3A state doubles championship May 29.

The Yi brothers, who had earlier captured the PIAA District 1 3A doubles title, swept through their first three matches in straight sets before advancing to the finals.

Justin Yi, a junior, said, “My service returns were working well throughout States.  Every team we faced had someone serving big and I was able to neutralize their serves with my returns, and Brian being a good net player was able to win easy points at the net.”

Brian Yi, a freshman, said, “During the finals and throughout the tournament, our serves were working very well. Both my brother and I were able to hit big serves in big moments and that was one of the main reasons why we were able to win the tournament.”

The Yi brothers enjoyed the close finals match against Auslander and Xu, whom they had defeated in the District 1 3A doubles championship finals in straight sets.

Justin Yi said, “In tennis, there’s a saying, ‘You don’t change a winning strategy.’  We beat them in straight sets twice in both Central League and District 1 finals, and what worked against them were serving to their backhands, returning strong to dictate the point, and hitting aggressively to the net person to prevent them from poaching, and we stayed with that winning strategy in the states finals match.  None of those worked as well as previous finals and each game was a battle.”

In the third set, the score was tied at 4-4 and the next two games both went to deuce.

“We worked hard and Coach Harris prepared us well, but it was obvious they too worked hard for the match, and were well coached to play us, and that made the match very exciting and fun, and winning it makes it even more memorable,” said Justin Yi. “One mistake could have cost us the match, and fortunately Brian and I dug deep, worked together, stayed positive, and found a way to win.”

Brian Yi said, “The final match was like a rollercoaster. There were many ups and downs with our emotions and lead changes throughout the match, but we were able to stay the course and finish very strong the last few games of the deciding set.”

The younger brother credited Justin with being a calming influence.

“Whenever I was nervous and frustrated, Justin was there to calm me down and help me get focused,” said Brian Yi. “During the set break after we lost the first set, I was very frustrated and distracted because I made a lot of mistakes that I normally wouldn’t make. To help me calm down, Justin would tell me different ways to keep my mind and body relaxed, whether it was a certain breathing technique or match strategy to keep me focused. This really helped me get myself together to start the second set, where I played much better.”

Justin Yi noted, “Brian played States with a right shoulder injury that limited his serve practice coming in.  I noticed his services were not at the same level in the second set compared to the first set throughout States.  When we lost the first set of the finals, Brian just picked up his level of play, especially his serves, and held his serves until the end.”