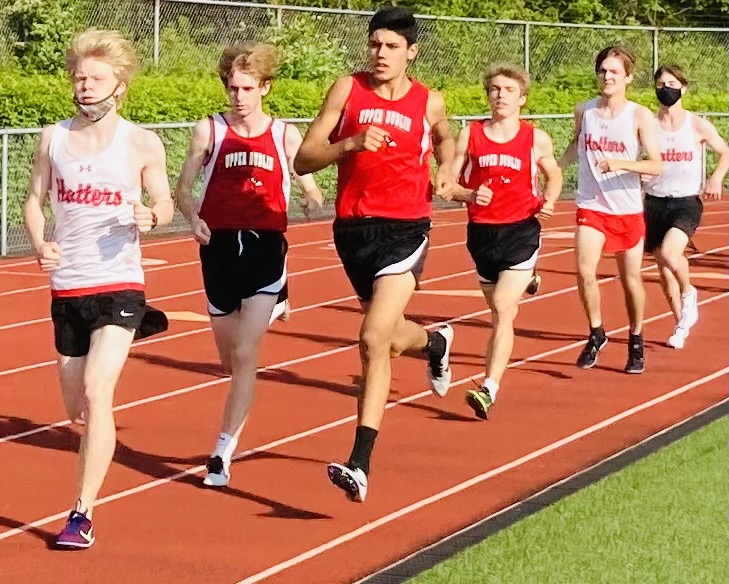 Hatboro-Horsham and Upper Dublin runners compete in the 3,200 on Tuesday, May 4, 2021. (Kev Hunter/MediaNews Group)

HORSHAM >> Hatboro-Horsham coach Mike Harmon stood on the infield of the Hatters’ home track, gesturing towards the group of young men huddled in the nearby end zone.

“We have a lot of fight in this group,” Harmon said. “They don’t want to lose.”

The Hatters completed their pursuit of perfection on Tuesday, completing an unbeaten dual-meet season with their victory over Upper Dublin.

Hatboro-Horsham sits atop the Suburban One League Liberty Division with a perfect 5-0 mark. To get there, the Hatters unleashed personal-best times, throws and jumps and put together one of their finest performances of the season against the rival Cardinals.

“This is basically like a pre-leagues (championships), because Upper Dublin is the other team we’ve been battling for the top spot,” said the Hatters’ Brian DiCola, who ran faster than he ever did in the 3,200 on Tuesday.

The Upper Dublin girls also chased down perfection, their victory over Hatboro-Horsham completing a 5-0 run through the SOL Liberty.

The Hatters boys and Lady Cardinals now look to the SOL Liberty Championships to defend their titles: Hatboro-Horsham goes for two straight (2019, 2021) on the boys side and Upper Dublin girls are trying for three in a row.

Said the versatile Peyton Kullman of Upper Dublin: “That would be awesome, because (prior to 2018), we hadn’t won it for a long time. It would be really exciting to set that as the new precedent, get a streak going.” Peyton Kullman has been a versatile performer for Upper Dublin and helped key a win over Hatboro-Horsham on Tuesday, May 4, 2021. Kev Hunter, MediaNews.

Kullman has already qualified for districts as part of the 4×8 relay and individually in the triple jump and both the 100 and 300 hurdles.

The senior has been a veteran point scorer and driving force for the Cardinals.

“We’re seasoned on the track side, and on the field side, we’re a little bit young,” Cards coach Matt Dwyer said. “We’re just progressing as we go along. We have a lot of young freshmen and sophomores that are new to the specialty events. And they’re coming along, which is really nice.”

Upper Dublin postseason prospects are growing. The 4×4 relay is closing in on a qualifying time.

“We’re set up nicely for districts, so we can focus on leagues and put girls in multiple events and try to win the league if we can,” Dwyer said. “It’ll be a hard-fought meet.

“It would be great for these seniors. The 2020 season was lost but they put a ton of work in. So it’ll be nice to see that pay off.”

The Hatters also went to work.

Hatboro-Horsham got more outstanding performances from leaders like jumps ace Kasey Savage as well as outstanding efforts from some of the youngsters.

“It was a good meet. The guys really stepped up,” Harmon said. “I put some young guys in some tough situations today, just to see if they could step up. And they did.

“We had a couple real big surprises today. We had one of our sophomore sprinters go 11.3. We had a lot of guys step up, a lot of P.R.’s. It was a very good team effort. The guys are excited that we went undefeated and we’re looking forward to seeing what we can do at leagues.” Brian DiCola won the 3,200 for Hatboro-Horsham in its victory over Upper Dublin on Tuesday, May 4, 2021. Kev Hunter, MediaNews.

With Devon Comber set to run the 3,200 at an invite this weekend, it was up to DiCola to bring it home. And he went out and not only won the race but notched a district-qualifying time.

“Earlier in the season, I had to run kind of slow because there weren’t that many people to run with. But in this race, we were like ‘we’re gonna do it,’ and we got it done.”