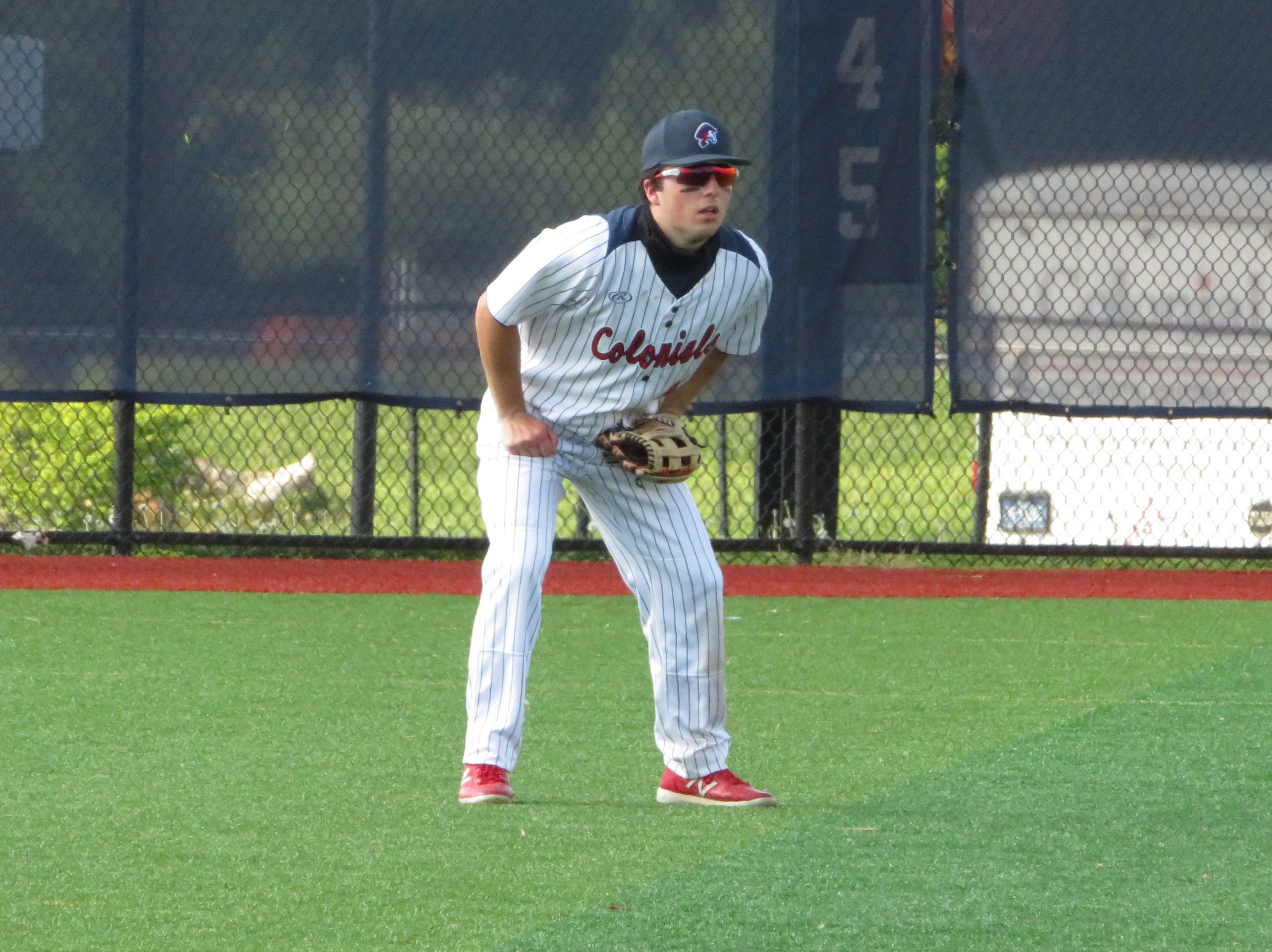 Plymouth Whitemarsh's Joe Capriotti went 2-for-3 with three RBI in a win over Lower Moreland on Tuesday, May 4, 2021. (Ed Morlock/MediaNews Group)

WHITEMARSH >> After losing the 2020 season to the COVID-19 pandemic, many spring athletes in the area are getting their first taste of varsity competition this year.

Plymouth Whitemarsh baseball has a handful of those players in the outfield. The No. 1 seed in District 1-6A has six different outfielders splitting playing time based on matchups. Some of those six are more effective on the defensive end while others provide a spark at the plate.

Senior Joe Capriotti fits the latter category and proved it in Tuesday’s 13-1 win over Lower Moreland at Plymouth Whitemarsh High School. The Whitemarsh native went 2-for-3 with three RBI as the Colonials improved to 13-0 in the five-inning Suburban One League crossover victory.

“My main goal is just to have fun and keep a cool head,” Capriotti said of competing for playing time. “I don’t think of any of these guys as enemies or competition. I just think of them as teammates and I’m more about the team winning than my individual success. If I’m playing well – great, play me. If not – I understand, although I do enjoy playing.”

Both of Capriotti’s hits Tuesday came in similar situations – two outs and runners in scoring position. In the bottom of the first inning, his two-out single scored Luke Gartland, who reached on a fielder’s choice and stole second. In the second, Jack Hildebrand and Gartland moved into scoring position on a wild pitch before Capriotti came through with another two-out base hit.

“Put the ball in play, hard,” he said of his mindset with two outs and runners on. “If it’s 0-0 I’m trying to hit the ball solid. Once I get to one strike or two strikes I’m like, ‘I have to bear down right here and put the ball in play.’”

“The two-out RBIs are so important in baseball,” PW coach Chris Manero said. “Those are always the biggest clutch hits.”

“He works really hard on his hitting,” Manero said. “I think it’s something that he takes a lot of pride in and he’s very focused on. He’s always looking at things and trying to learn things and trying to find ways to improve himself. When I think of him, he’s a guy who I think can make some noise with his bat and holds himself to a pretty high standard.”

Capriotti plans to attend Penn State University, study psychology and maybe get involved with the baseball team as a manager. He’ll continue playing this summer for Whitemarsh Legion before hopefully playing in the Pendel or Perkiomen Valley Twilight League in the future.