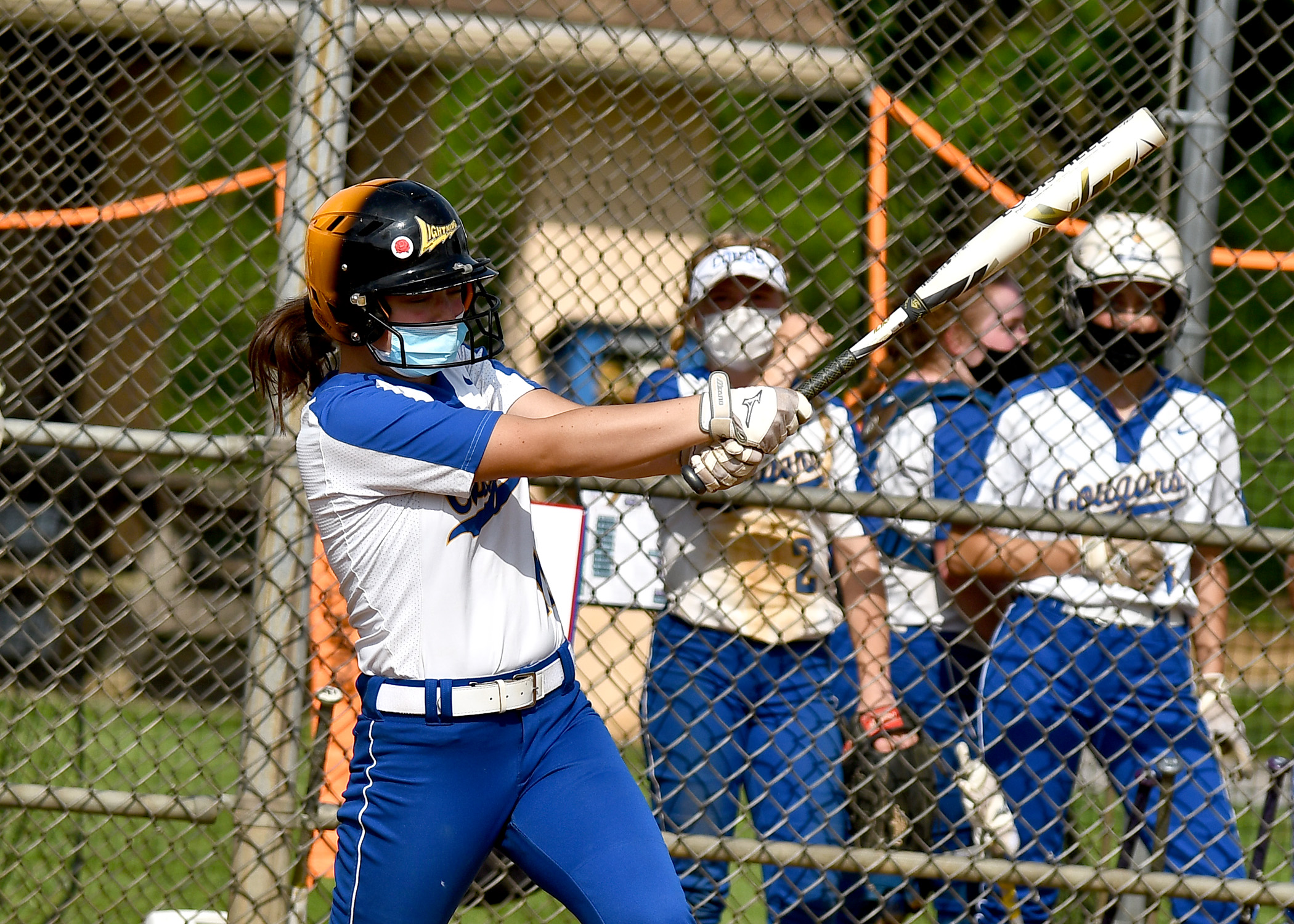 LIONVILLE—The Vikings’ Amanda Gomez reached a career milestone with her bat, and sister Jess Gomez was solid in the circle, but they day belonged to Downingtown East freshman Rachael Schumann. The Cougars young pitcher, in just her second career start, came through with her biggest win, holding the Vikings to just five scattered hits and two runs as Downingtown East (7-5-1, 6-4-1) edged West Chester East (10-6, 10-4) by a score of 3-2 Tuesday afternoon .

“West Chester East has such a tremendous program, any time you get a win you have to be happy,” said Cougars coach Bill Williamson. “Rachel is only a ninth grader, and pitched such a beautiful game. She kept attacking the strike zone and attacking the strike zone. Her pitches on 0-1, 0-2, were especially great, just outside the zone, getting them to chase.”

Any young pitcher is going to be a little bit nervous coming in to start against a good team, in a game with playoff implications. But the Cougars helped calm the nerves, giving Schumann an early lead.

Ainsley Robinson (2 for 3, 2B, R) did what a lead-off hitter is supposed to do, stroking a single to left and promptly moving up sixty feet with a stolen base. Nicki Sudall (1 for 2, 2 R) made it first and second with one out, reaching on catcher’s interference. With two outs, the speedy Robinson took off for third on the second pitch to Angelina Romano (2 for 3, RBI), then came in to score when the throw to third sailed into left field. Romano then delivered Sudall with an RBI single.

“Our whole team was really excited about playing this game, and I admit it was a little nerve-wracking,” said Schumann. “Getting out to the early lead really helped me relax and just pitch. That was big for us.” Over the course of the first five innings, Schumann allowed just two base hits, both of which came off the bat of Amanda Gomez (2 for 4). The first of the two, a line shot up the middle in the top half of the third, was career hit number 100 for the Vikings centerfielder, a Catholic University recruit.

“What can I say about Amanda?” said Vikings’ coach Bobby Swier. “It’s a pretty amazing feat, considering she’s really only had three seasons to do it thanks to COVID. It’s exciting. You know it has to weigh on you a little bit when you know it’s coming up. But she just goes up and gets the job done, day in and day out. I couldn’t be happier for her.”

The Vikings tied the game with a two out rally in the top half of the sixth. With the bases loaded and two outs, Abbey McCormick (1 for 2, 2 RBI) came through with a base hit to knock in Mia Kulp and Jess Gomez, who had both reached on singles.

Unfazed, the Cougars answered right back in the bottom half of the inning. With runners on second and third and one out, Steph Allessandro stepped to the plate, and knocked in both runners with a single to short right. Then Schumann retired the Vikings in order in the seventh to seal the victory. “I knew my team needed me, and I just got the job done, like the girls who got on ahead of me got the job done,” said Allesandro. “Hats off to West Chester East for battling back the way they did, but we always know we can battle back, too. It’s pretty amazing to think that, as underdogs, we got two wins over them this year.” “It helps to know that I always have my team behind me, and a catcher like Nicki (Sudall) who called and great game,” said Schumann. “I had some really good spins going, but just knowing my team is behind me is the biggest thing.”

The Vikings can’t dwell on this game long—they have key divisional games coming up against Coatesville and Downingtown West over the next five days. “It was great to see us battle back the way we did against a pitcher who was throwing as well as she was,” said Swier. “Especially doing it with two outs. We just aren’t a consistent team right now. Districts are right around the corner, and we’ve got to find some consistency. There are no teams we can sleepwalk through in Class 5A.”