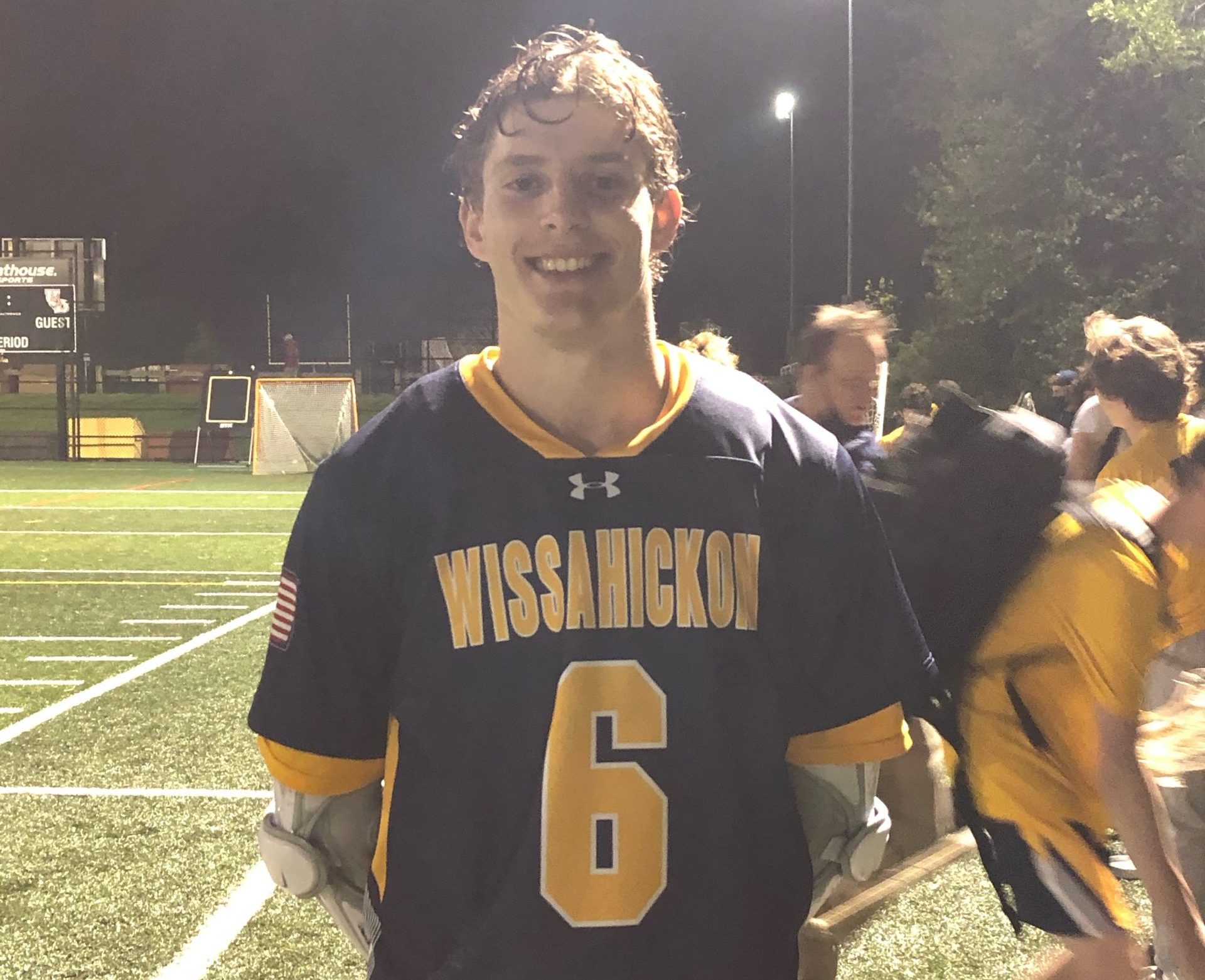 Wissahickon senior Jackson Intrieri scored seven goals and assisted another in the Trojans' win at Upper Dublin on Tuesday, May 4, 2021. (Andrew Robinson/MediaNews Group)

For most of the game, especially in the first half, the Wissahickon senior was exactly that and his teammates weren’t too far off either. The Trojans boys lacrosse team has taken on some big name teams this spring, but there’s no bigger game on their schedule than the annual showdown with Upper Dublin.

Intrieri scored seven goals and assisted another as Wiss started fast and never slowed down in a 19-5 win over the host Cardinals in a duel between the last unbeaten teams in the SOL American.

“It’s just being patient on offense and overall, through the season, I’ve just tried to get better using my body,” Intrieri, who has committed to Ursinus, said. “I was trying to use my shoulders and elbows to turn guys and get where I wanted to on the field, take my time and not let them speed me up.”

Tuesday was a big night for Intrieri and for the program. It was Wissahickon’s (10-3, 7-0 SOL Ameican) first win over Upper Dublin since sweeping two meetings against the Cardinals in 2010 and snapped a 15-game UD (6-5, 4-1 SOL Ameican) win streak in the series with last season’s meeting cancelled due to COVID-19. The teams played twice during the season prior to 2017.

The game, contested under the lights at UD’s Spark Field complex, had a good number of spectators that Intrieri said helped make it feel like a big game.

Wissahickon senior Matt Fritz, the team’s ace faceoff man bound for Ohio State, gave the visitors a huge jolt to open the game. Fritz won the opening draw outright, then took off down the field before burying a shot for a 1-0 lead just 13 seconds in.

Brody Myers and Intrieri added tallies within the first two minutes, staking Wiss to a 3-0 lead and prompting an early Upper Dublin timeout.

“The fans, the atmosphere, almost feeling like a summer night, it doesn’t get better than this,” Intrieri said. “We just rolled right off of that.” Wissahickon’s boys’ lacrosse team huddles during a first half timeout against Upper Dublin during their game on Tuesday, May 4, 2021. (Andrew Robinson/MediaNews Group)

A penalty on the Trojans got UD going, as Andrew Sowers found Vijay Foster for a gorgeous take and a man-up goal that cut the lead to 3-1. However, instead of sparking the hosts to more, it would be as close as UD would get the rest of the way.

While Wissahickon’s offense has been firing off most of the season, the Trojans’ defense has also been extremely solid. Long pole defensemen Jake Licata, Ethan Glass, Quinn Fonash and Ethan Glass were active all game in front of goalie Scott Pfeiffer, which coach Matt Conway noted was important against UD’s attackers like Sowers, Steve Pileggi and Brett Rama.

“(Sowers) and (Rama) are really good players who make everything go for them, so I thought Jake Picata and Quinn Fonash were huge in that they could play one-on-one with them so we didn’t have to slide too much,” Conway said. “I was really impressed with our whole defense, but those two in particular were very strong.”

Intrieri had a hat trick by the end of the first quarter, with the third goal proving especially costly for UD. A late Cardinals turnover with a little more than eight seconds on the quarter clock allowed the Trojans to tag one on late, with Intrieri getting the finish with just 0.6 on the board for a 6-1 lead.

The senior, who often plays through X behind the goal, had everything working in the first half on Tuesday. A three-sport athlete at Wissahickon, Intrieri was also a wide receiver/safety in football and point guard in basketball and showed his versatility in the second quarter.

After assisting Dean Wolfe’s goal to open the second, the senior scored back-to-back goals near the end of the frame to send Wissahickon into the half up 10-2. Whether it was a pole or a short-stick midfielder on him, Intrieri kept finding a way to the goal and finished the half with five goals and a helper.

“I knew they were going to slide, you could see they were locking off even before the faceoff, so I just had to be patient,” Intrieri said. “We all can get hot at any time. Whether it’s Brody sweeping over the top, Kyle (Lehman) coming around from X, Dean Wolfe from the wing, we use up picks, down picks.

“I wouldn’t say we’re un-guardable, but I do think we’ve shown we’re a hard team to defend.”

Upper Dublin tried to lock up Intrieri after the break and the senior did have a couple turnovers early in the third quarter, but his teammates had his back. Lehman and Sam Baker both had multiple goals in the second half, and Intrieri didn’t stay totally quiet, adding a goal in each period of the second half.

Brett Callahan and Sowers scored second-half goals for UD. Rama scored late in the first half thanks to some hustle when he caused a turnover in Wissahickon’s defensive end, got the ball and buried his chance. Despite facing a barrage of shots, Cardinals goalie Nate Fechter made 10 saves. Upper Dublin’s boys lacrosse team takes the field for warmups prior to its game with Wissahickon on Tuesday, May 4, 2021. (Andrew Robinson/MediaNews Group)

Fritz, who went 20-of-25 on faceoffs, had the goal of the game when he put away a behind-the-back take over his shoulder off the opening draw of the fourth quarter.

Wissahickon has played a challenging nonleague schedule and while the Trojans were No. 6 in the District 1 3A rankings after the game, they aren’t looking beyond their next game. Even with a senior-led team that’s pulled some impressive results, Intrieri noted last spring showed them how fast everything can be taken away and they don’t want to overlook any chance to play together.

“We’ve been looking forward to these past couple years for a while now,” Intrieri said. “Seeing it come full circle, it’s awesome to be a part of it. We’re grateful for every day we’re out there.

“We have to make sure we’re prepared for anything at this point, because we think we can run with anyone in the district.”