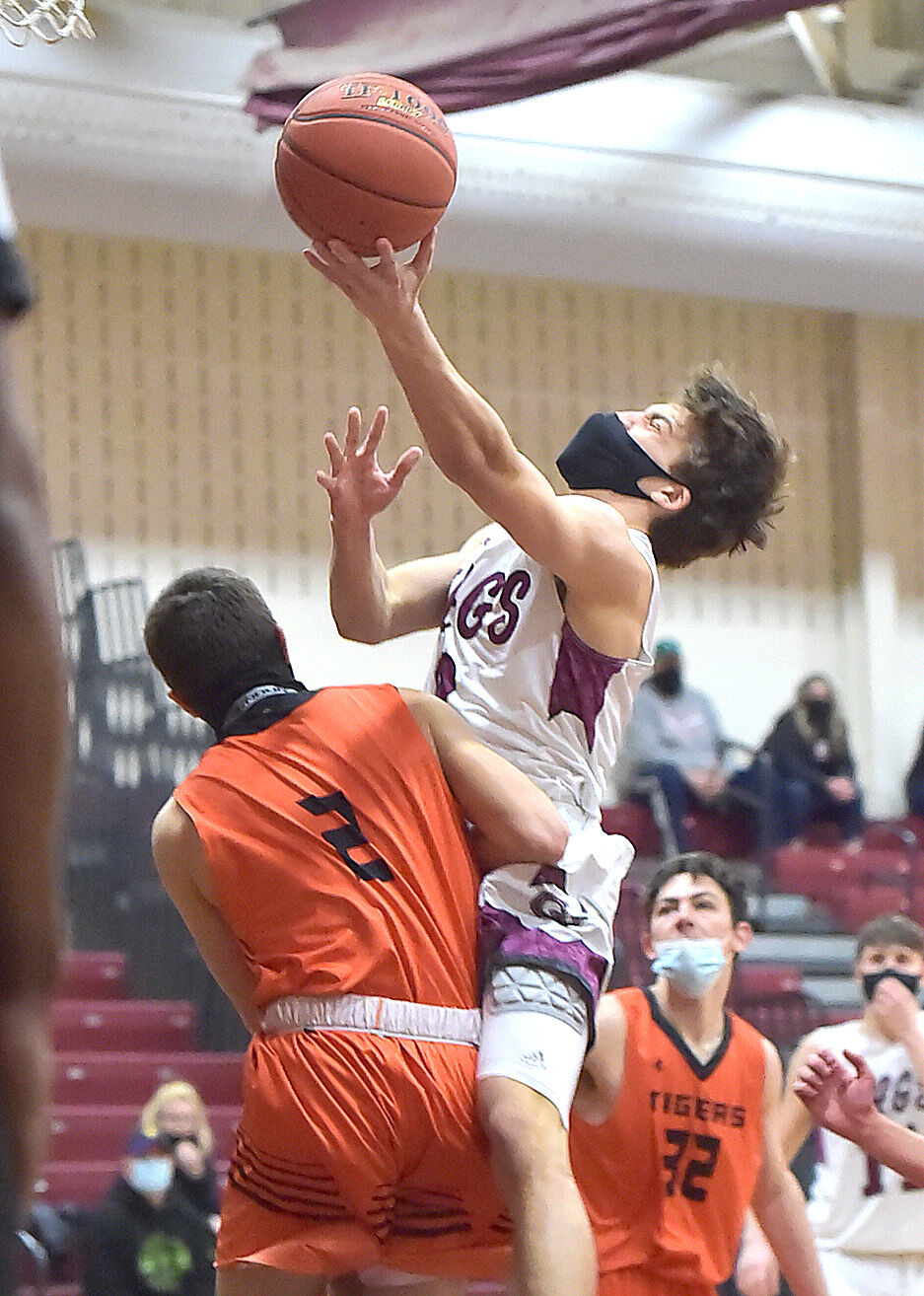 TREDYFFRIN — Gannon McKee didn’t expect, when he arrived at Conestoga High School Thursday night, that by the end of the evening, he’d end up detailing Ryan Wootten’s offensive prowess. Wootten might not have, either.

A role player who averages 4.4 points per game, fifth-most on a Garnet Valley squad with at most a six-deep rotation, it’s usually others who step to the offensive forefront.

But in the Central League final, Wootten picked a fine time to have a career night. “We were just ready,” Wootten said. “Shooters shoot. Our game plan was drive and kick and get guys open.”

Shooters also cut down the nets, as Garnet Valley did after a 52-39 win over top-seeded Conestoga for the first Central League championship in program history.

The protagonist early was Wootten, who scored a career-best 14 points. He hit four first-half 3-pointers, staking the Jaguars (15-3) to a 10-point lead at the break.

The game boiled down to two decisions that No. 2 seed Garnet Valley forced upon Conestoga. The first concerned Wootten. With the Jags spreading the floor to negate Conestoga’s defensive presence in the lane, Wootten camped out in a corner. As Carl Schaller drove to the basket, Wootten’s defender was forced into a choice: He could either leave Wootten and help deter Schaller’s seemingly automatic sorties to the rim, or he could stay home on Wootten.

“Him coming out hitting four 3s in a row, it just riled up the team,” McKee said of Wootten. “The bench kept getting louder and louder every time he hit a 3, and they didn’t really close out on him really hard, so we just kept going to him because he had the confidence to shoot it and he kept shooting it. It enlivened our offense.”

The second quandary involved the teams’ tactical mismatch. Sixteen of Conestoga’s 20 first-half points were provided by their pair of 6-9 forwards, Andrew Fox and Michael Walz. But with the vertically challenged Jaguars playing essentially five guards, coach Mike Troy had to decide between playing to the Pioneers’ strength with height or negating Garnet Valley’s strength by using a smaller, quicker lineup to close out on shooters.

The early deficit didn’t help, nor did Walz rolling an ankle and missing part of the second quarter. Once Garnet Valley stretched the lead to 12 in the third quarter, stops became the priority instead of the hammering of an effective post offense.

Fox scored 13 points, 11 in the first half, to go with nine rebounds, but he didn’t make a basket in the second half. Walz finished with nine and seven. By and large, given the huge height disparity, McKee and the Jaguars acquitted themselves admirably, pressuring the ball and fronting in the low blocks.

“If he’s in the position he wants to be in, he’s going to score nine out of 10 times,” McKee said. “So if we’re able to move his feet off the block and outside the lane, he’s a little more uncomfortable and then just playing defense as a team, talking a lot and making the right slides, making the right help defense.”

Conestoga (7-2) made a run in the third quarter. Austin Fontaine fueled it, coming off the bench to score 10 points. Seven came in the third, more than the Jags scored as a team that quarter. Coupled with the Pioneers negating Schaller off the bounce, with Jeremiah Miller locking him up, Stoga clawed within five in the fourth quarter.

“Second half, the coaches tried to really get us riled up and hyped to make a push to win the game,” Miller said. “Austin’s very talented offensively, so when he gets going, it’s really hard to stop him. Defensively, I just wanted to get as many stops as possible for my team to try to make a run.”

Max Koehler with a bomb at the buzzer.
Halftime: Garnet Valley 30, Conestoga 20 pic.twitter.com/E8WbXODtuh

Garnet Valley held its nerve late, Schaller leading the way. He finished with 18 points, the Jaguars weathering second-leading scorer Justin Langan being limited to two points on 1-for-8 shooting.

Instead, the supporting cast stepped up. Wootten had 14 plus four assists. McKee scored 10 points. Max Koehler added eight, including a long 3-pointer at the horn in the first half. Beyond Schaller and Langan, the rest of the Jags shot 7-for-12 from 3-point range. And committing just two turnovers (to nine by Conestoga) didn’t hurt.

“We’re a great team and we just all work together well,” Wootten said. “Justin’s been great all season. He’s been hitting 3 after 3. We just let other people shoot and it worked out.”

The Jaguars got it done at the line, shooting 10-for-12 in the fourth. That included two makes from Koehler on a soft technical foul called on Walz with 65 seconds left. A five-point possession, all at the line, effectively ended the game at 46-36.

The victory erases a lingering bitter taste from last season, when the Jaguars finished first in the regular-season standings but lost in the tournament to eventual champion Haverford. For McKee, feeling that way again was not an option.

“We haven’t forgotten how we felt losing to Haverford in the first round,” he said. “We were hurting a lot after that. We knew we didn’t want to feel that again. We knew we wanted to win it and play as hard as possible, as physical as possible.”