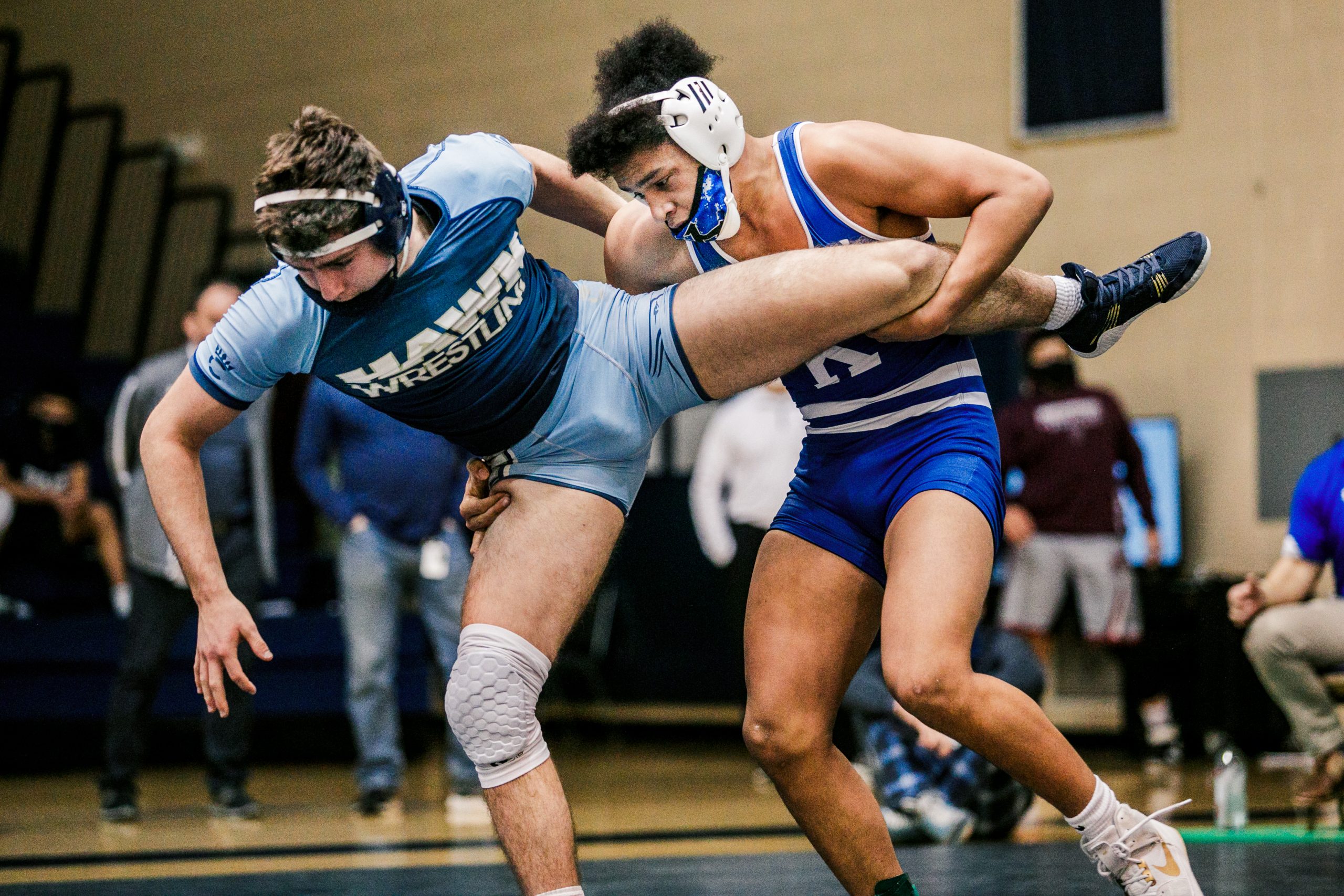 On one hand, District 1 wrestlers can take some comfort in knowing they don’t have to go through the Southwest region to earn their state medals.

On the other hand, the Northeast region won’t be much easier.

While the bigger chunk of the state’s talent pool will be battling in a brutally deep West Super Regional tournament, the Southeast and Northeast regionals will duke it out at the East Super Regional at Quakertown High, Saturday.

The top four qualifiers from the Southeast and Northeast make up eight-man brackets, with the top four clinching a spot on the state podium. Which state medals wrestlers earn will be determined in Hershey, March 13, but those dreaming of bringing home hardware will have to out-duel the powers from Nazareth, Northampton and Bethlehem Catholic, among others. District 12 was shifted to the Northeast in 2013 to make numbers work, leaving the Southeast solely to District 1, where it has averaged 19.3 state medals since.

Here’s a glimpse of all 13 weight classes with wrestlers’ state rankings, according to Pa Power Wrestling on rofkin.com. No. 8 Spring-Ford’s Cole Smith is breaking out in his first postseason, with two titles to preserve his unblemished record (14-0). The competition level will be upped a level or two, this week, with No. 1 Northampton’s Carson Wagner, a returning sixth-place state medalist, and No. 7 Stroudsburg senior, Josh Jasionowicz, who made states last winter. Smith is on the opposite side of both, but with Northeast runner-up, No. 6 Luke Sirianni of Abington Heights. As scrappy and funky as Smith can be, he looks like District 1’s best shot at a placer, and even finalist, though No. 11 Council Rock North’s Tony Burke should be in the mix, as well. The depth of the Northeast will be on display the first couple weights, with a lot of inexperience coming from District 1. Quakertown’s regional champ, No. 12 Mason Ziegler, will be put to the test, with No. 8 Nazareth’s Charlie Bunting on his side. Bunting was victim of a brutal district bracket as a freshman, but he will be a very tough quarterfinal foe for No. 19 Spring-Ford’s Dominic Ortlip. No. 22 West Chester Henderson’s Carmen Cortese has a steep trek to the podium with Northeast champ, No. 7 Zach Jacaruso of Delaware Valley, No. 9 Bethlehem Catholic’s Cael McIntyre and No. 18 Pennridge’s Sam Kuhns on his side of the bracket. No. 7 Downingtown East’s Keanu Manuel not only got the monkey off his back by beating No. 8 Boyertown’s Jay Maldonado, last week, but also set himself up with a much better path to the finals. Manuel should reach the semifinals, where he’d get either No. 14 Cannon Hershey of Oxford or No. 12 West Scranton senior, Austin Fashouer, who placed at regionals for the first time. Maldonado’s half of the bracket is tougher, with No. 13 Bethlehem Liberty’s returning state qualifier, Javien DeLeon, who was upset by Fashouer, last week. A win there by Maldonado would likely pit him against No. 1 BECA’s Dante Frinzi, a fifth-place state medalist as a sophomore. No. 6 Downingtown West’s Dom Findora opens his third quest for a state medal with his best draw yet. He has a winnable quarter, to potentially face a tough freshman from Pottsville, No. 18 Parrish McFarland, should he get past No. 23 Quakertown’s Zach Borzio. Findora has a good chance to reach the finals, where BECA’s stud, No. 3 Tyler Kasak, would likely be waiting. Henderson’s unranked Billy Wilson gets Kasak, a fifth-place state medalist as a freshman, first, and if that should go as expected, Wilson would have to beat either No. 22 Nate Shippey of Interboro or No. 19 Northampton’s Patrick Snoke to reach the blood round. This is the first weight where District 1 may have the favorite, albeit not a big one. No. 2 Coatesville’s Nate Lucier has been on a very focused tear, and his challengers from the Northeast on his side of the bracket are Abington Heights unranked freshman, Austin Smith, and No. 14 Nazareth sophomore Dominic Wheatley. If Lucier stays at his level, he should reach finals, where No. 4 BECA’s Matt Mayer could be his toughest test this season. Mayer placed fourth in the state his first two seasons before not reaching the podium last year. He’s the class of his side, with No. 19 Perkiomen Valley’s Kelly Kakos a candidate to advance. Council Rock North’s Kyle Hauserman is ranked No. 1 in the state and thus, goes in as the odds-on favorite as the lone returning state medalist. Northeast champ, No. 8 Andrew Harmon of BECA, has been to states before, as well as his quarterfinal opponent, No. 16 Domenic DeFalco of Quakertown. No. 13 Boyertown’s Chance Babb and No. 15 Kennett’s Trent Kochersperger are also two-time regional placers. Kochersperger needs to get past Northampton junior, No. 18 Christian Fritz, to see Hauserman. All four District 1 kids should be in contention for a medal, but with Harmon a likely placer, those last two spots are going to provoke some wars. West Chester Henderson’s Sammy McMonagle hopes to redeem his first loss, a week ago, with a pair of tough potential rematches. (Nate Heckenberger – For MediaNews Group)

No. 6 West Chester Henderson’s Sammy McMonagle was cruising through his senior season until No. 5 Bensalem’s Connor Eck upset him in the regional finals. As a result, McMonagle’s pursuit for a second state medal became a little more daunting. He opens with an always-precarious BECA wrestler, No. 19 Trey Miletics. McMonagle should advance for a rematch against No. 4 Northampton sophomore, Dagen Condomitti, whom McMonagle defeated in sudden victory last March. West Chester East’s unranked Andrew Luke draws Condomitti first after an impressive postseason. Condomitti has not been tested this season, but as the younger brother of Nebraska recruit, Jagger, he will have a lot to say about who wins this bracket. Eck, meanwhile, has a much-smoother path to the finals. Two state medalists, No. 6 Neshaminy’s Zac Martin (sixth) and No. 5 BECA’s Evan Gleason (fifth), seem on a collision course to meet in the finals. This is a very solid weight for District 1, even without a true superstar. No. 14 Spring-Ford’s Zach Needles is Gleason’s first opponent, and though he’ll be an underdog, he has the experience to make it a match. No. 9 Interboro’s Dom D’Agostino has a good chance of seeing the winner in semis. No. 13 Strath Haven’s Chase Barlow gets a Nazareth sophomore, No. 20 Noah Okamoto, who’s 5-2 for his career. This is a weight where District 1 could do some damage if everyone is on their game. The highest returning state medalist in the tournament is No. 1 Northampton’s Jagger Condomitti, who finished runner-up last winter after taking fourth as a sophomore. No. 22 Downingtown East’s Bo Horvath gets the honor of wrestling him, first. No. 3 Spring-Ford’s Jack McGill is a good bet to face Condomitti in the finals as the only senior in his half of the bracket. No. 11 Council Rock South’s Matt Colajezzi is on Condomitti’s side, and he has his best chance to win a state medal in his third try. District 1 should get two through, but even though Nazareth and BECA have qualifiers here, Horvath has a puncher’s chance if he has a great day. This was one zany weight in the Southeast, with the favorite, No. 21 Matt Romanelli of Downingtown East, getting upset by a kid who didn’t move on, and Kennett’s unranked Darrale Barrett reaching the finals after starting the postseason as the eighth seed at sectionals. No. 12 Lower Merion’s Jack Lledo took full advantage and claimed the title, but he’s in for a tough semi against either Romanelli or No. 11 Nazareth’s Sonny Sasso. Barrett has No. 13 East Stroudsburg North’s Wayne McIntyre, while West Chester Rustin’s unranked Marek Seaman, who was playing basketball at this time last year, faces favorite, No. 3 Dominic Falcone of Easton. Falcone placed seventh and eighth the last two state tournaments. This could be a tournament of redemption for Romanelli, but he has to believe it. This is a man’s bracket, with six seniors, and the top three ranked kids in the state. It could boast the best semi of the tournament between No. 1 Spring-Ford’s Joey Milano and No. 3 Nazareth’s Drew Clearie. Both own a pair of state medals and Clearie beat Milano for third in the state last year after Milano beat him twice in the regular season. No. 2 Easton’s Isaiah Reinert beat Clearie a week ago to set himself up nicely, with a junior in the semis; either No. 9 Hazleton’s Bryce Molinaro or No. 14 Garnet Valley’s Sam DiTrolio. No. 24 Henderson’s Koh Bauman has Clearie, first, but does have a glimmer of hope in the consolation bracket. The two regional champs at opposite sides of the bracket look like a modern day Hans and Franz, only with actual jacked physiques, and state medals, to boot. No. 1 Sun Valley’s Ryan Catka took third a year ago while No. 4 Del Val’s Jason Henderson’s took fifth in the same bracket. Catka beat Henderson, 7-5, in the consi semifinal and seemed destined to meet again. No. 6 Hazelton’s Seth Hunsinger, No. 8 Central Bucks East’s Quinn Collins and No. 9 Central Bucks West’s Carl DiGiorgio were also in the same 195-pound bracket. Hunsinger beat DiGiorgio but lost to Catka. There’s a decent possibility that Collins and DiGiorgio meet for the ninth time in their high school careers, this time with a medal on the line. There are only two freshman over 132 pounds in this tournament, and No. 9 Nazareth’s Sean Kinney, the Northeast champ, is one of them. Not many freshmen big men maintain that level of success deep into the postseason, but with the four returning state medalists in the state all out West at this weight, Kinney’s run could go on. No. 6 Upper Darby’s Julien Laventure has made one of the biggest jumps in District 1 and can continue to make a name for himself against a strong quartet from the Northeast. No. 7 Max Harar of Council Rock North is on Kinney’s side, and begins with No. 10 Easton’s Matthew Cruise.