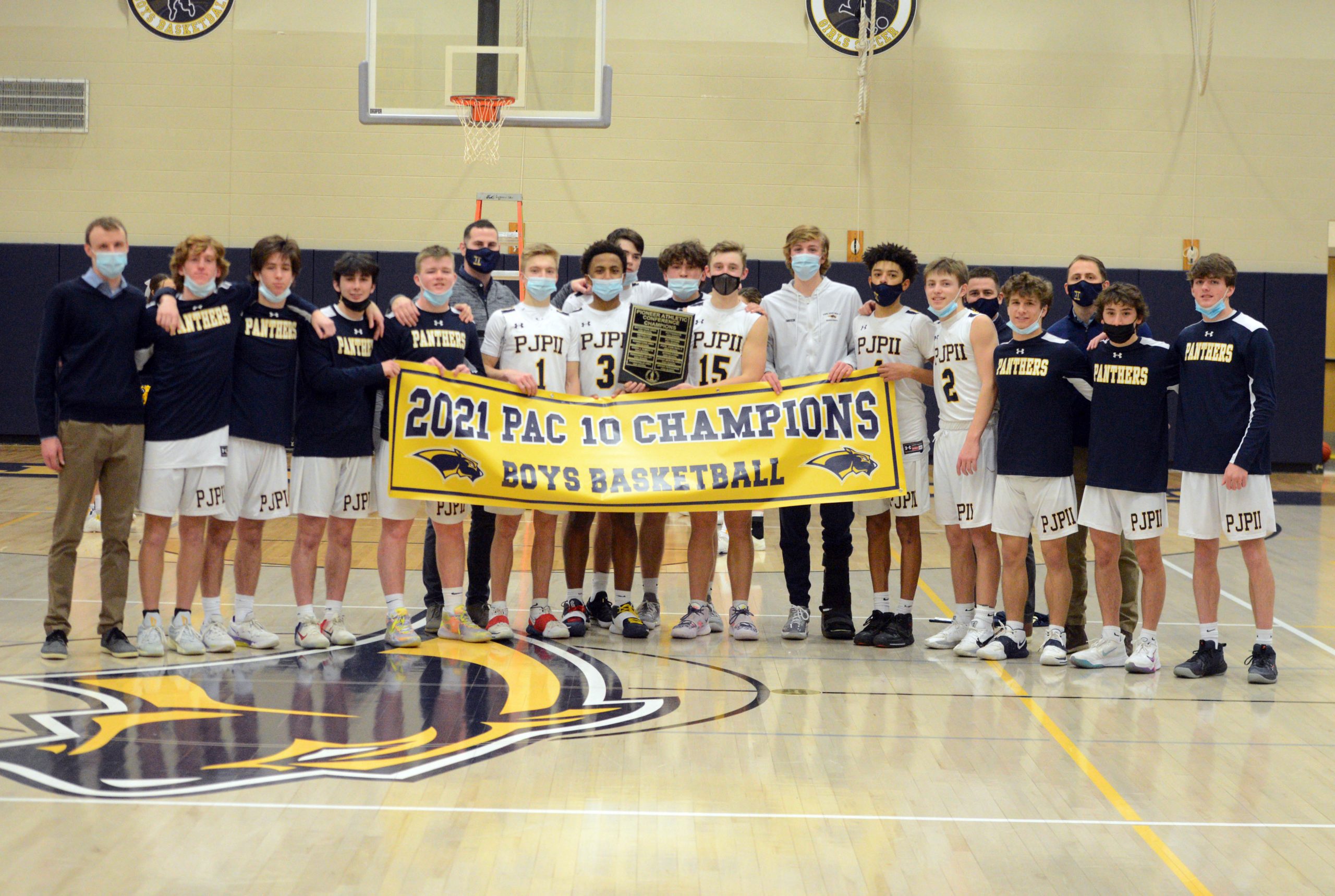 The nets were planned to be cut down, a PAC title plaque was ready to be handed out, a championship banner hung on the wall behind one of the baskets. Even a handful of friends and classmates waited in the parking lot ready to make the moment a special one.

Already with a championship crown clinched, all the Golden Panthers needed to do was defeat division rival Phoenixville to make sure the title celebration had a proper feel.

Pope John Paul II trailed by as many as nine points in the second half, but a dominant fourth quarter led to a 46-35 win over the Phantoms and a postgame ceremony that felt fitting for the program’s first league title since 2010-11 — the school’s inaugural season.

“I don’t think it would be an understatement to say it’s everything,” Pope John Paul II coach Brendan Stanton said. “There’s obviously a lot of expectations when you plan to cut down the nets and have a banner up before the game and all the stuff like that. I do think that probably got to us a little at the beginning, but I said before the game, ‘You gotta block out all the noise.’

“Ultimately this is about a culminating moment of these seniors’ four years, what we’ve done the last couple of years in this program to really turn things around. Now, to reach the mountaintop of the PAC it’s just unbelievable and I couldn’t be prouder of these kids.”

PJP officially clinched its Pioneer Athletic Conference title with a win at Upper Merion on Monday when it reached 13-0, an insurmountable record in a pandemic-altered season where the league champion was to be determined by best league winning percentage in the regular season.

The original hope was to celebrate an undefeated PAC season along with the school’s second championship following the Phoenixville game, but Boyertown soiled some of those hopes by handing PJP its first loss of the season on Tuesday. The Phantoms came into Thursday’s game able to split a share of the Frontier Division with the Golden Panthers after being denied a division title in the final regular season game last season. Phoenixville appeared ready to ruin Thursday’s celebratory night for the Golden Panthers when they went up 30-21 with about two minutes to play in the third quarter.

The Golden Panthers wanted no parts of that, ensuring they’d have a proper celebration with a 25-5 run to end the game. Senior guard Luke McCarthy scored 15 points in the fourth quarter to lead the charge.

Phoenixville junior Zavier Mayo had 14 and senior Mike Memmo 12 in the loss.

PJP’s defense held Phoenixville without a point for five and a half minutes of game time until Memmo free throw made the score 35-31 with 3:32 left in the game. By the time the Phantoms scored their first field goal of the fourth with 1:31 to go, PJP had already extended its lead to 13 points.

Senior Mike Wells came in to start the fourth quarter and forced two steals leading to two McCarthy buckets. McCarthy picked his spots to jump and put pressure on the Phantoms’ ball handlers.

Kevin Green, whose teammates consider him the best defender in the PAC, shadowed Mike Memmo, the PAC’s second leading scorer (17.5 ppg), throughout the contest. After allowing Memmo to break through for eight points in the third, Green held him to just a pair of free throws in the fourth.

“We just really locked in,”McCarthy said. “Shots weren’t following, but we knew if we picked up our defense we could get it done. That’s what we did and we’re just happy we could get the win.”

Green’s older brother Justin was the last Golden Panther to cut down his piece of the net during Thursday’s championship celebration, climbing up the ladder in a protective boot.

The senior forward, who was a first team all-league and all-area selection a season ago, has suited up just six times for PJP this season due to injuries, last appearing Feb. 23 against Pottstown.

That didn’t take away from a special moment that’s been three years in the making since he transferred to Pope John Paul II as a sophomore.

“It’s been three years, and I feel like each year we’ve just gotten better,” Justin Green said. “It’s been a long ride, a tough season with the injuries, but these guys get it done. They don’t need me to win. … It just speaks to how good of a team we are.” Thursday’s win improved the Golden Panthers to 8-1 without one of their senior leaders, but there’s no doubt they are better when he’s out on the floor. He’s been one of the PJP’s rocks the past three seasons, helping the program go from a .500 season as a sophomore in 2018-19, to a league runner-up finish in 2019-20 and finally the school’s first PAC championship in a decade as a senior.

“I really think it was that the kids started to believe,” Stanton said. “Year 1 we had a successful season in our minds. We were right around .500 and that was our goal to make the PAC playoffs. We hit that. Last year, we wanted to win a PAC playoff game, we hit that.

“This year we came in and we’ve been locked in that we want to win a PAC championship. It was the only way I felt these seniors deserved to go out. It’s been the mission since we lost to Methacton and had to watch them cut down the nets last year. These kids haven’t been deterred one bit.”

Up next for PJP is a District 1-4A championship game against New Hope Solebury (6-12) at home on Wednesday.

The Golden Panthers won their first district title against Lower Moreland last season before advancing to the PIAA quarterfinals where their season stopped due to the COVID-19 cancellation of the winter sports championships.

They’d planned on bringing a 15-0 record into the district title game, but McCarthy said Tuesday’s loss paired with Thursday’s win might have been the jolt PJP needed heading into the postseason.

“It could have been one of the worst and best things to happen to face real adversity for the first time this year,” McCarthy said. “Boyertown beat us outright, and I think it helped us. Now, we get ready for districts and go into states and we’re not done yet.” Phoenixville’s rank and opponent in the District 1 Class 5A tournament was already set in stone before Thursday’s game.

A chance to grab a share of the Frontier Division and knock off a league rivals before the postseason was a nice incentive for the Phantoms, who haven’t won the division since 2015-16.

Phoenixville trailed 9-7 at the end of the first quarter Thursday, but sparked by Mayo started the second quarter on a 9-0 run to jump ahead 16-9. The Phantoms led by 16-14 at halftime and turned that into a 30-21 advantage late in third.

Though Phoenixville kept PJP’s offense contained for most of the contest, the Phantoms offense went missing down the stretch, preventing the completion of the upset bid. A 3-for-8 showing from the foul line in the fourth quarter didn’t help matters.

“We talked about tonight was going to be about making the tough plays,” Phoenixville coach Eric Burnett said. “Defensively, we couldn’t have asked for better. I don’t know how many threes they made. One, two, maybe? To hold that type of team from behind the arc was incredible on that end.

“But they’ve gotta take those charge, dive on the floor, and you’ve gotta make foul shots. It was a one-point game and we missed three consecutive foul shots. We have to take charges and make free throws to win big games.” After racking up a 6-1 mark to start the season, the Phantoms went without games from Feb. 5-22 due to a COVID-related shutdown of the program. The contest against the Golden Panthers was Phoenixville’s eighth in 11 days.

Though they came out of the stretch with a 4-4 mark, the Phantoms played some good basketball, picking up wins over district playoff teams Upper Merion and Methacton.

It could have looked even better if tight games against Liberty champ Perkiomen Valley, Spring-Ford and Thursday’s loss to PJP went the other way.

“Certainly everybody’s had a difficult season with regard to some of those layoffs,” Burnett said. “We kind of it took it as a no excuse mentality. I think we had 18 days between games. It was bumped up between snow days and all that, so we had to scramble to get practice time in.

“The key during that break was that they stayed engaged … doing their assignments that we put together, doing our workouts that we did. Credit to the boys for staying engaged. That kind of let us come out of that stretch still focused with eight games in 11 days.”

“A couple of them have been around,” Burnett said. “We’ve been in districts, so we know what it’s all about, but they gotta stay engaged. It’s tough for any team. You want to win the Frontier and you want to beat your rival Pope John Paul, but understand that district basketball is another animal that you want to be part of. It gets fun. We’ll get to play a different opponent and we’ll see if they’re ready for it.”