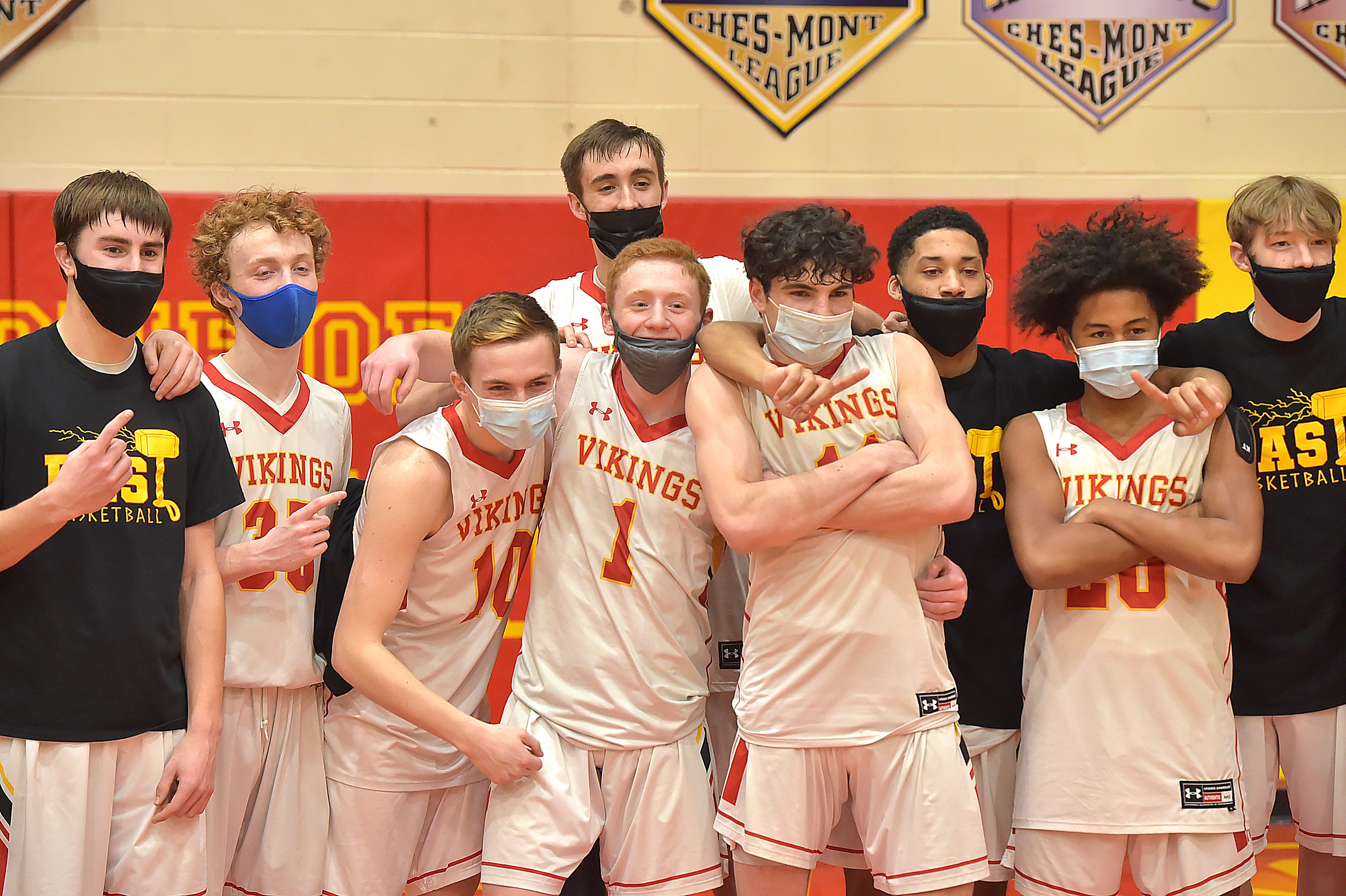 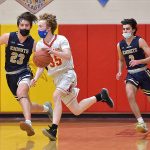 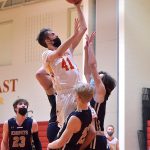 West Chester East’s (41) Jackson Kulp barrels over West Chester Rustin’s (22) Sam Sproull in the second half. Kulp was called for a charge.. 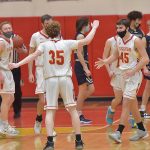 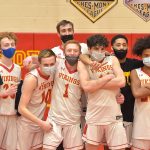 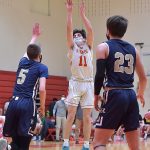 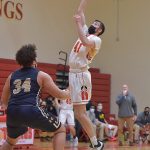 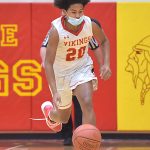 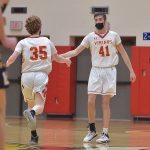 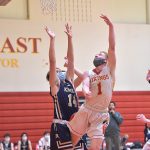 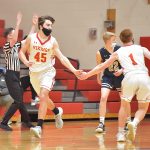 West Chester East’s (45) Ryan Price gets a hand from teammate (1)Mike Dedda after hitting a three point basket in to start the game against West Chester Rustin. 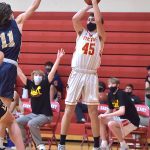 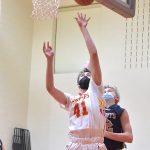 West Chester East’s (41) Jackson Kulpnets a basket in the second half against West Chester Rustin. 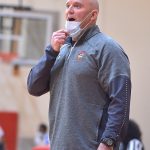 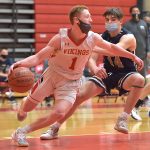 West Chester East’s (1) Mike Dedda dribbles out from under his basket as West Chester Rustin’s (14) Matt Nochumson defends in the fourth quarter. 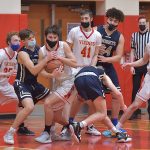 WEST GOSHEN >> The Ches-Mont League decided earlier in the season that there would be no official league champion this year, largely because it was uncertain if all teams would complete their seasons, due to the effects of COVID-19.

“To beat them three times in a season and to be the No. 1 seed and come out with a win feels amazing,” said West Chester East point guard Mike Dedda. “It feels like we won a championship and we feel we are the best team in the Ches-Mont League. Everybody brings something to the game for our team. We do not count on just one player. We have six or seven guys who can contribute.”

The taut affair was back and forth the entire game, with the Vikings (12-3) holding a 29-22 halftime advantage on the strength of some first half scoring from freshman Ryan Price, who ended the game with 11 points. The Vikings outscored West Chester Rustin 14-6 in the second quarter.

But, Rustin (9-4) came roaring back in the third quarter, outscoring West Chester East, 17-12, in the third quarter and only trailing, 41-39, at the end of three. The Golden Knights’ uprising comprised of the big play of senior center Jacob Barksdale, who led West Chester Rustin with 18 points to go along with 11 rebounds. Star guard Griffin Barrouk, who had just four points at halftime, ended the game with 17 points and was a big part of the Golden Knights’ comeback.

The fourth quarter featured players from both teams diving for every loose ball and every rebound being hotly contested. When Barrouk hit a jumper from the right side, it was a slim 48-46 Golden Knights lead with 3:34 left in the third quarter. But Jack Kushner and Kieran Hefferan hit back to back 3-pointers, and the Vikings looked to take command of the game.

Kushner had 15 points on the night while Jackson Kulp led West Chester East with 16 points.

“It does not matter to us who scores the points,” Kushner said. “We were really hyped up for this game and we looked at it like a championship game. We played like it was our last game of the season. A great feeling to win this game.

The Golden Knights clawed their way back in the game with Barrouk scoring twice in a row to make it a 50-49 Golden Knights lead. But the next time down the floor Hefferan drained a threefor a 52-20 Viking lead, one they would never relinquish.

Barrouk was called for charging with 1:40 to play in the fourth quarter and Kushner hit one of two free throws for a 53-50 Viking edge. After a Rustin timeout, a Barrouk runner rimmed out and the Golden Knights had to start fouling to stay in the game. With 58 seconds left, Kulp drained two free throws and West Chester East held a 55-50 lead. The Golden Knights could not recover this time, as the Vikings went six for eight from the free throw line in the last two minutes to ice the game and complete what felt like a Ches-Mont League championship.

“Each guy brings a different ingredient to the game,” said West Chester East coach Tom Durant. “We have five, six guys that can score. Look at our freshman Ryan Price. He plays with no fear. They all play tenacious defense and they fight for every rebound.”