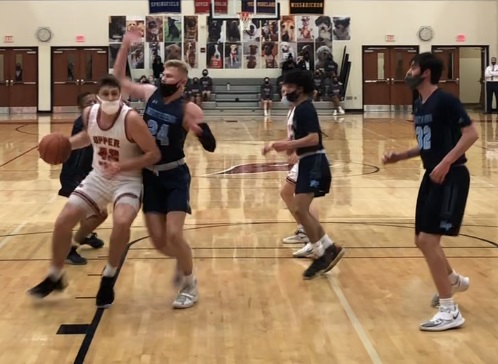 UPPER DUBLIN >> Drew Stover was a man on a mission Monday night.

The Upper Dublin senior center hasn’t seen much playoff action in his career and with his team entering the week a spot out of the District 1-6A playoff, there was no room for error. With a North Penn team that sat several spots above the Cardinals coming in, it was either win or see those playoff hopes slip away.

Stover answered the challenge with a career night, pouring in 43 points as he out-dueled a 27-point game from Josh Jones as Upper Dublin topped North Penn 73-67.

“We needed to win, so that was a huge drive,” Stover said. “We were upstairs getting ready, blasting some loud music, so we had good energy for this game.”

The Cardinals entered the day sitting No. 21 in the District 1-6A table with the top 20 teams qualifying for this season’s playoffs.

North Penn scored the first seven points of the night before Stover hit a 3-pointer to put UD on the board. That alone should have been a sign of things to come as the 6-foot-7 Millersville recruit isn’t quite known for his outside shooting.

If that didn’t get the point across, Stover’s 16-point opening quarter did as he contributed all but two points, including another 3-pointer, as UD took a 18-16 lead into the first quarter break of the game. By halftime, Stover was 3-of-4 from downtown and had 27 markers in the book with his team clinging to a 37-35 lead.

“That’s not always my game, but I had a good night,” Stover said. “I’ve been putting time into it but I can’t say I’ve ever had a game like that. It just seemed like I couldn’t miss, it was a pretty good feeling.”

Stover and Jones, a Louisville soccer recruit, spent most of the night against each other trying to use their respective strengths to their advantage. Jones, more mobile and bouncier, carried his team for stretches offensively before fouling out in the final minute with another big game to his season register.

While Stover may not be as fleet of foot, he did have a size advantage and it was one the Cardinals tried to force-feed as much as they could in the first half.

“He’s just very big and very wide, so when he catches the ball in the paint it’s almost impossible to stop him,” Jones said. “We tried to get guys to dig in and make him kick out because he was really hurting us in the first half.”

UD’s only other offensive contributions in the first half came from a layup by DJ Cerisier and a 3-pointer from Vijay Foster. While Stover’s teammates would come up big in the second half, with four sophomores starting around him, he made sure to demand the ball in the first half to set the tone.

The senior shot an extremely efficient 18-of-23 from the floor, adding 10 rebounds and two assists.

“That’s all there is to it,” Stover said. “Whenever I got the ball, I was just thinking to score.”

Jones opened the third quarter with a trey, putting the Knights back in front and they held a 42-41 lead on Ryan Zeltt’s hoop with 6:41 left in the quarter before things fell apart for a spell. An 8-0 run, with six of the points coming from Cerisier and Griffin Pensabene, put Upper Dublin up 49-42 midway through the quarter.

Stover found Ceriser, who bagged seven of his 15 points in the third, for a three then scored off a feed from Colin O’Sullivan and added another score late as UD built a 58-49 lead going to the final quarter. Jones said his team lost composure in the third and got a little too caught up in complaining to the officials instead of trying to get stops and they left other guys open while trying to stifle the Cardinals’ big man.

Jones came on strong to start the fourth, scoring five points in a 7-0 run that pulled North Penn within 60-56 with 5:12 on the clock. The 6-foot-5 senior has surpassed 25 points on multiple occasions this season, but doesn’t look at his production as a surprise.

“I’ve been playing basketball my whole life so I’ve known I could compete at this level,” Jones, an all-state soccer player said. “A lot of other people misjudge me and think I can only play soccer, which I don’t blame them, but I knew coming in last year I was capable of doing this.”

Stover gave his opponent some props as well.

“It’s challenge for me because I’m not as mobile as him,” Stover said. “I know he’s playing D-I soccer, that’s crazy because he’s a good basketball player. I didn’t do a great job on him, but I was happy being able to get the win.”

North Penn did a good job of slowing Stover’s scoring down in the second half, but he still managed eight points in the third and had six of the Cardinals’ final eight points to close out the win.

The Knights, who entered the game holding the No. 15 spot in 6A will see what their final standing is after Wednesday’s seeding meeting. Jones said Monday’s game was a good lesson in matching the energy of a desperate team and the Knights will try to do a better of getting more guys involved on offense.

“They were going to bring everything they had and did, so credit to them but we have to realize even though we’re in the playoffs, we’ve been dropping,” Jones said. “We’ll see where we sit and go from there. These guys can step up and deliver, myself and a couple other guys will get some attention so we’ll need them in those situations.”

Upper Dublin hosts Souderton on Tuesday night and while Big Red doesn’t have the best record, Stover was adamant his team can’t afford to overlook them. It was something he planned to express to his teammates Monday night and again Tuesday morning.

He wants a playoff bid and he’s willing to carry his team there if necessary.

“I would love to at least get in, it’s one thing to worry about it now but I just want to win the next game,” Stover said. “I haven’t seen that much of the playoffs my entire career, so I’d love to get that experience.”