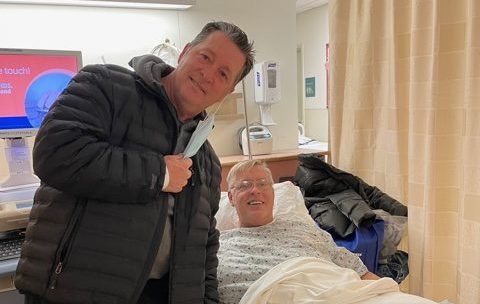 THORNBURY >> When Harry Paris thinks about the blessings in his life, family is at the very top of the list. And it goes much deeper than his wife Janet and son Jacob.

In the late 1990s his father volunteered to donate a kidney and a successful transplant gave Harry a new lease on life that lasted two-plus decades.

And even though it functioned well past the average of 12-20 years – and actually outlived Harry’s father — the kidney started to fail in 2019, and soon thereafter Harry was back on dialysis. His older sister, Cathy, then offered to donate a kidney, but there were medical complications that derailed that plan. That’s when Harry’s only brother, Joe, stepped up.

“I am just very lucky to have the family that I do,” Harry said.

“My brother was always there for me, looking out for me growing up,” Harry said. “And this has only made us even closer.”

Joe Paris, Jr., is a teacher at Stetson Middle School and the longtime boys’ golf coach at West Chester Rustin High School. He decided to donate a kidney to his younger brother last summer, and following five months of extensive tests – which revealed a surprising twist — it happened on January 26th.

“Maybe this can bring to light how important organ donation is,” said Joe, 55. “And believe me, if I can do it, anybody can do it. I really feel that way.”

‘I FORGOT WHAT IT WAS LIKE TO BE SICK’

The Paris brothers look back fondly on their childhood and attending Upper Darby High School. The first sign of any health issues came when Harry was 17 and took a physical prior to the baseball season.

“They noted that I had a high amount of protein in my urine,” he recalled. “I was just a kid, so I pretty much ignored it, but a few years later I went to the hospital for shoulder surgery and they said, ‘you have a problem.’”

It was kidney disease, and when his kidney failed Harry was abruptly put on dialysis. And although he was in his mid-20s and otherwise healthy, it was a grueling process.

“It’s just a tough way to live,” Joe pointed out. “It’s every other day, 5-6 hours a day, and it leaves you completely exhausted. It really chips away at your quality of life.”

That’s when his dad, Joe, Sr., stepped in, and on Harry’s 26th birthday the first transplant took place. He only stayed in the hospital for three days and very quickly returned to his normal life.

“I always felt like my dad was with me,” Harry said.

“The second time through dialysis was much rougher than the first – when you are young, everything just kind of rolls off your back.”

Harry got married, became a father and started a landscaping business. A decade ago his father passed away but his kidney kept functioning. But years of taking anti-rejection drugs eventually weakens the kidney, and by the end of 2018 Harry was struggling. He went on medical disability and eventually had to return to dialysis.

“I wasn’t prepared for that,” he acknowledged. “I kind of took it for granted. I forgot what it was like to be sick.”

‘DIALYSIS IS NO WAY OF LIFE’

The grind of dialysis soon took hold once again. And this time it was even more intrusive and more debilitating.

“It really restricts your freedom – you are always tied to that lifeline,” Harry explained.

“Dialysis is no way of life. You can’t eat what you want and you can only take in 30 ounces of liquid a day – which isn’t much.”

Seeing his brother struggling, Joe began to seriously think about donating a kidney. He was tested many years earlier and knew he was a match, just like his father. After consulting his wife, Eileen, and kids Anna, Zachary and Tina, he told Harry last summer.

“He was a little overwhelmed,” Joe said. “It was emotional, obviously. Harry didn’t know what to say. I told him that I was going to go through the (testing) process and if it’s meant to be we are going to get it done.”

Harry added: “It was a relief. I was on the transplant list but that can take anywhere from two years, if you’re lucky, to 10 years.”

In August, Joe began the very comprehensive and time consuming testing process at Thomas Jefferson University Hospital in Philadelphia. He made the trip every other week last fall for blood tests, EKGs, MRIs, ultrasounds and even meetings with a psychiatrist and social worker.

The green light came in early January and the date was set for the 26th. They were each assigned a separate transplant team, with Dr. Jaime Glorioso heading up Harry’s unit and Dr. Adam Frank in charge of Joe’s.

“I have to admit it was a little scary when they give you a date,” Joe said.

‘I CAN’T WAIT TO GET A MIKSHAKE’

A potential issue arose, however, in early January. During the screening of his blood, doctors discovered that Joe had hemochromatosis, which is a treatable disease that causes the body to absorb too much iron.

“They told me if I didn’t take care of it, it could lead to serious liver problems,” Joe explained.

“So the gem in all of this is that I would have never found out about this if I wasn’t preparing for the transplant.”

It was a late surprise, and Dr. Frank offered to delay the transplant. But after talking it over with his wife, Eileen, who is a nurse, Joe decided to keep the original schedule.

“Harry and I didn’t talk much about it, but when it came down to crunch time, he asked me if I really wanted to go through with this,” Joe reported. “I said, ‘yeah, I do.’”

The procedure took place on a Tuesday and was a success. The brothers were in adjacent hospital rooms while recovering.

“I remember going over to see Joe and he was annoyed because it was four in the morning when I woke him up,” Harry said.

“I told him that I loved him and that I appreciate that he’d saved my life and saved my family.”

Doctor Glorioso told Harry that as soon as they put in the kidney in it started working immediately. It showed no signs of rejection and tests showed that the kidney was very healthy.

“Harry told me, ‘This is the first time in two years that I am going to drink a big bottle of water,’” Joe said. “Then he said, ‘I can’t wait to get a milkshake!’

“That’s when it started to sink in that this was really going to change his life. It is still kind of hard to believe I actually did it, but I wasn’t really nervous.”

By Thursday, Joe was allowed to go home, but he had strict guidelines from Dr. Frank. He is planning to resume his teaching duties at Stetson on April 26th.

“The doctor knew I was a golfer and told me that I am not to pick up a club for at least three months,” he said.

A month after the surgery, Joe is getting closer and closer to a full recovery. Harry had complications, and had an extended hospital stay, but is also now home and getting stronger every day.

“He is doing better and better,” Joe said. “The doctor explained that his organs hadn’t been doing anything for two years and now they’ve been jump-started.”

Harry is happy that he can eat or drink pretty much whatever he wants. But organizing his pills is a full-time job (he takes about 30 pills a day right now).

“The first month was rough,” he admitted. “I wasn’t prepared for it to be this hard, but I am older.

“To drink a bottle of water and not have to worry about it is a joy. People take things like that for granted.”

‘YOU HAVE ENERGY, STAMINA THAT YOU DIDN’T HAVE’

Although he doesn’t need to go anymore, Harry still thinks about the friends he met while undergoing dialysis. And he has a message for them.

“Some of the older people I met in dialysis are just afraid and don’t realize they are a candidate for a transplant,” he said. “I saw people in their mid-70s get transplants.

“It amazing to go from feeling terrible one day to feeling a vibration in your body the next day. You have this energy and stamina that you didn’t have.”

Joe is looking forward to the time, hopefully in the near future, that he can resume having a close daily relationship with his younger brother.

“Before, we hung out a lot,” he said. “But once he started dialysis, it all depended on the day and how he was feeling.”

Harry may even take up golf someday. Joe is a member at Penn Oaks Golf Club, and recently the club’s director or golf, Harry Hammond, contacted him.

“He joked that now that my brother has my kidney, he may become a golf fanatic like me,” Joe laughed.