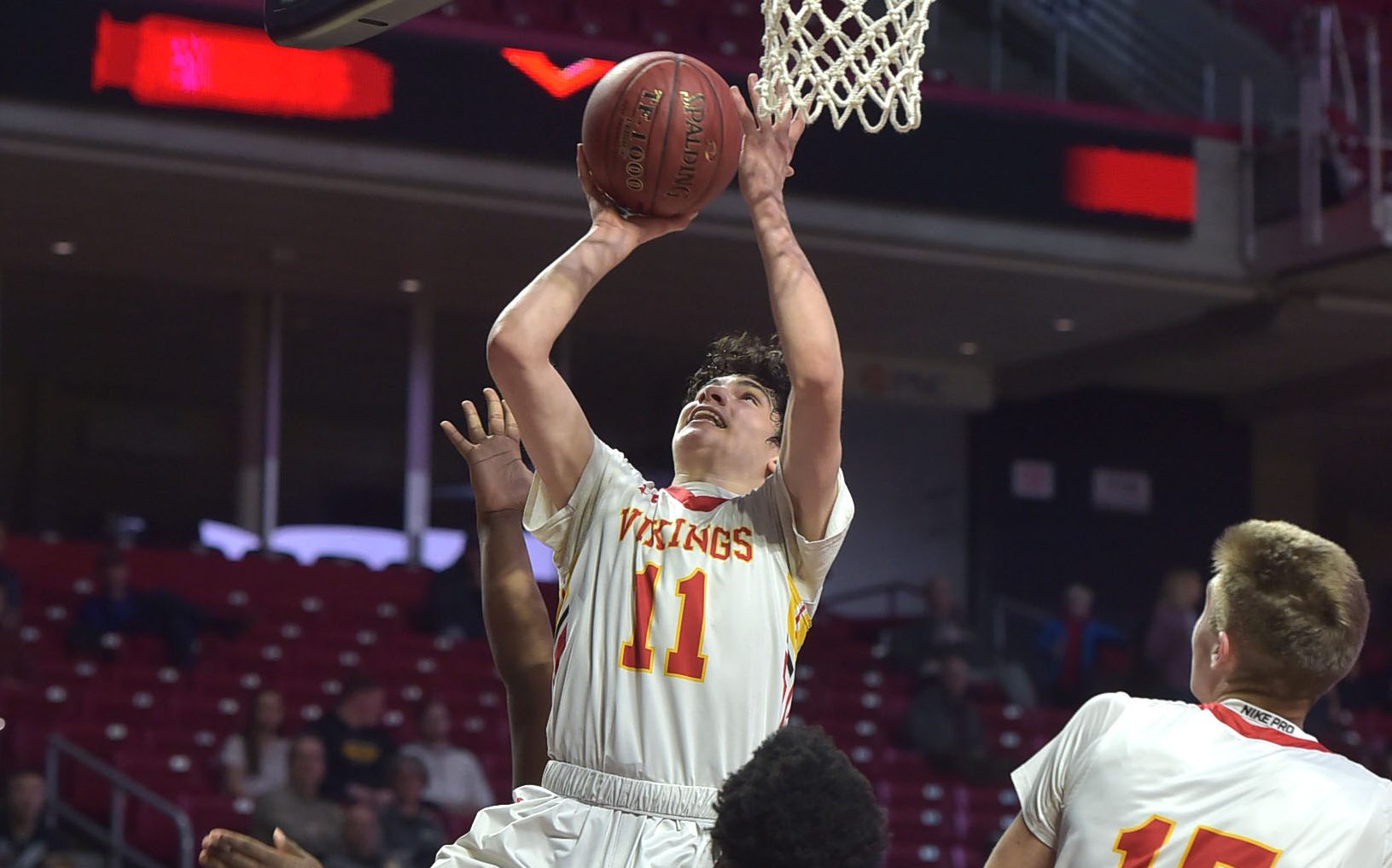 WESTTOWN >> Thursday night’s matchup between West Chester East and West Chester Rustin had the feel and intensity of a district or state playoff game rather than a nonleague regular season game. The two teams went at each other hard for the entire 32 minutes, with each team looking like the winner a few times. When it was over, a big defensive play for West Chester East sophomore Jack Kushner proved large as the visiting Vikings outlasted West Chester Rustin, 58-54.

Kushner, who poured in 10 points for the Vikings (10-3), was matched up with Golden Knights (8-3) star Griffin Barrouk most of the game, and Barrouk had a marvelous night, with a game-high 29 points to go along with five assists, as he single-handedly kept the Golden Knights in the game.

But with 1:15 to play in the fourth quarter and the Vikings with a slim 55-54 edge, Barrouk attempted to drive to the basket when Kushner stripped the ball away and fired a pass to Mike Dedda for a lay-up and a 57-54 lead with 1:03 to play.

“He was having a real good game and he is very tough to guard,” Kushner said. “But, toward the end of the game I told myself to lock in and try to clamp down on him. I don’t think he scored the last two minutes of the game so I guess things went okay. Tonight, we knew how important this game was to us so we could move up in the district points so we really went at each other. It was a real fun game tonight.”

The two teams traded leads most of the first three quarters, and a 8-0 West Chester Rustin run at the end of the third gave the Golden Knights a 47-44 lead heading into the fourth. The Golden Knights forced six West Chester East turnovers in the third. Barrouk was doing it all for Rustin, driving to the basket, hitting the open man and draining jump shots. But, the Vikings were more balanced, putting three players in double figures with Jackson Kulp leading the team with 13 points, including three 3-pointers.

After a Kushner follow of a Kieran Hefferan shot, the Vikings took a 53-51 lead with 3:12 to play in the fourth quarter. Then, Hefferan made a big play as he stole a pass from Mike Miller and went down to score and it was a 55-51 Vikings advantage.

West Chester Rustin brought the ball down and went down low to big man Jacob Barksdale, who headed to the basket and appeared to score. But, the Golden Knights’ big man was called for an offensive foul, and the Vikings had the ball and a four-point lead with 2:32 left in the fourth.

After a Viking miss, Barrouk drove hard to the basket, scored, got fouled and sank the free throw to bring Rustin within a point at 55-54 with 2:06 to play. Rustin caught a break when the Vikings turned the ball over, but Kushner came up with the big play on Barrouk and the Vikings had a big win. A win which, for now, puts them right on the cusp of a coveted top eight spot in the District 1 Class 6A playoff point race.

“The game had a playoff feel and that is a credit to the kids,” West Chester East coach Tom Durant said. “And seeing Jack and Barrouk, two very athletic kids going at it was something. I want to credit Griffin on the way he transformed his body and put in the work in the weight room. He is going to be a great Division I college player. Last time we played Rustin we had another athletic guy, Mike Dedda, on him but Jack has more size. This was a heck of a game and I guess rivalry games should be like that.”