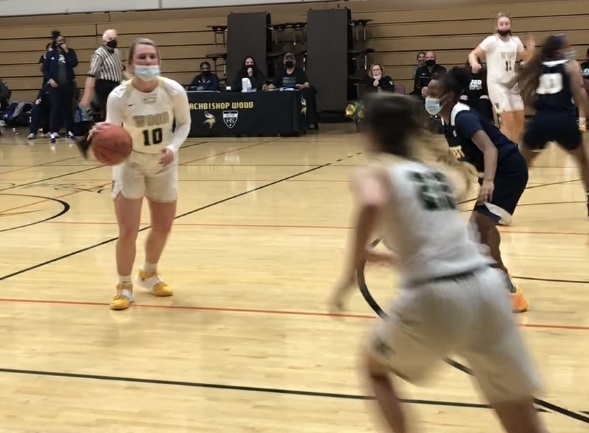 Archbishop Wood's Bri Bowen (10) looks to make a pass as Shannon Morgan (22) moves off the ball during their game against West Catholic on Thursday, Feb. 25, 2021. (Andrew Robinson/MediaNews Group)

The junior forward adds a measure of brawn that complements the flash of the Vikings’ 3-point shooting and cuts to the basket on offense and Bowen is a grinder defensively. With Wood celebrating its seniors while facing West Catholic for the first time since last season’s PCL title game, Bowen stole the show.

Bowen’s career night resulted in a 24-point, 11-rebound double-double that set the tone as the Vikings  rolled to a 79-48 win over the Burrs on Thursday to retain the top spot in the PCL Red Division.

“I am a very physical player and I’m not afraid to be,” Bowen said. “I never want to make it about myself but this was also my first 20-point game and it felt amazing to do so much for my team.”

West Catholic (4-2, 3-2 PCL Red) is led by senior guards Ciani Montgomery and Destiney McPhaul, one of the top players in the state but the Burrs don’t have a ton of size on the interior. That’s where Wood wanted to take advantage defensively using senior forward and Bryant recruit Dana Kiefer.

Bowen, who guarded McPhaul much of the night, said her goal was to make the left-handed senior go right and push her toward Kiefer or Ryan Allen inside to force up a tough shot. Wood’s (7-1, 7-1 PCL Red) defense was airtight early, with the Burrs shooting just 1-of-11 in the first quarter while McPhaul was limited to nine points on the night.

“We knew we had to be ready to give extra help,” Kiefer said. “We wanted to close out on their shooters but also play knowing there was help behind us. It was all teamwork, really.”

Offensively, the Vikings have been looking for stronger starts and they got their best of the season on Thursday racing out to a 21-4 lead after eight minutes. Bowen, who was halfway to her double-double in the first quarter, paced Wood with five points and five rebounds in the frame and drawing the first of the eight fouls in the game that put her on the foul line.

West Catholic came out on a 9-0 run behind Montgomery, who finished with a team-best 20, to open the second quarter but the Vikings responded with the next 10, capped by a traditional three-point play by Bowen to rebuild their double-figure lead. The Burrs had no response for Bowen, who took 15 free throws during the game and relished taking the contact under the basket.

“I’m always trying to work on finishing with contact but also practicing my free throws as much as I can,” Bowen, who shot 11-of-15 at the line, said. “I take pride in my strength because I work at it a lot. I like to lift and I love squatting, so I want to use it on the court.” Archbishop Wood’s Bri Bowen puts up a free throw against West Catholic during their game on Thursday, Feb. 25, 2021. Bowen scored a career-best 24 in the Vikings’ win. (Andrew Robinson/MediaNews Group)

Wood led 36-21 at the half but the best was yet to come for the Vikings offensively. A steal by Bowen led to Allen assisting senior Noelle Baxter for a 3-pointer to open the third quarter and Wood never slowed down in a 33-point frame as the hosts doubled their lead to 30 points at 69-39 by quarter’s end.

Bowen spent part of halftime working on her perimeter shot and made it worth the time by hitting a trey during an early 8-0 run in the quarter but she again did most of her damage at the foul line. The junior drew four fouls in the quarter with the final one putting Wood in the bonus for the rest of the game and she hit all six of her free throws for a nine-point quarter.

“She was phenomenal,” Wood coach Mike McDonald said. “She had a game like this in her and she was just laser-focused. (West Catholic) is very, very talented but they don’t have a ton of size so I thought we did a nice job moving the ball and Bri did a nice job taking advantage of her size and her strength down low.

All five of Wood’s starters combined for the 33 points with Kiefer going for eight of her 16 on the night in the quarter including a couple of 3-pointers. The senior co-captain, who added five rebounds and an assist, said it was easy to feel confident with the way her teammates were sharing the ball.

“Everyone having the ability to get a shot but also make the right decisions got the whole team involved and when we do that, that’s how we thrive,” Kiefer said. “I was looking for my shot but it was also my teammates getting me open and knowing some people are being guarded harder than others, the help on them leaves the rest of us open.”

Allen contributed 14 points while senior co-captains Kaitlyn Orihel and Noelle Baxter put in 13 and seven points respectively. McDonald said the contributions from Kiefer, Bowen and Baxter were huge given how much the Vikings had been leaning on Orihel and Allen to score this season.

Wood has a three-game week coming up, starting with a trip to Archbishop Carroll on March 2 followed by home games with Lansdale Catholic and Bonner-Prendie on March 5 and 6 that also count for PIAA Class 4A seeding. The Vikings will head to West Catholic for a rematch on March 9 to wrap up PCL Red Division play with the top two teams in the standings qualifying for the PCL title game.

“It’s huge for them individually but also our kids who had been scoring to see we can trust them and it’ll only make it easier on them,” McDonald said. “If teams can’t commit extra defensive help to stop one person, it only makes things more open for Ryanne and Kaitlyn. It’s a lot harder to stop five than it is to stop one or two.”

With the outcome in hand, the scoring output slowed in the fourth quarter but Bowen didn’t slow down. The junior’s final score was likely her most fitting as she powered in to grab and offensive rebound and stuck the putback for a 72-46 lead.

Bowen added three assists and two steals to round out a breakout performance and she said it was sign that she doesn’t have to be flawless on the floor.

“I don’t have to make the most perfect play,” Bowen said.  “A weakness of mine is trying to play too perfect and always make that perfect play, so I can play within the flow of the game and be effective.”