Abington rallies past Souderton to win in overtime 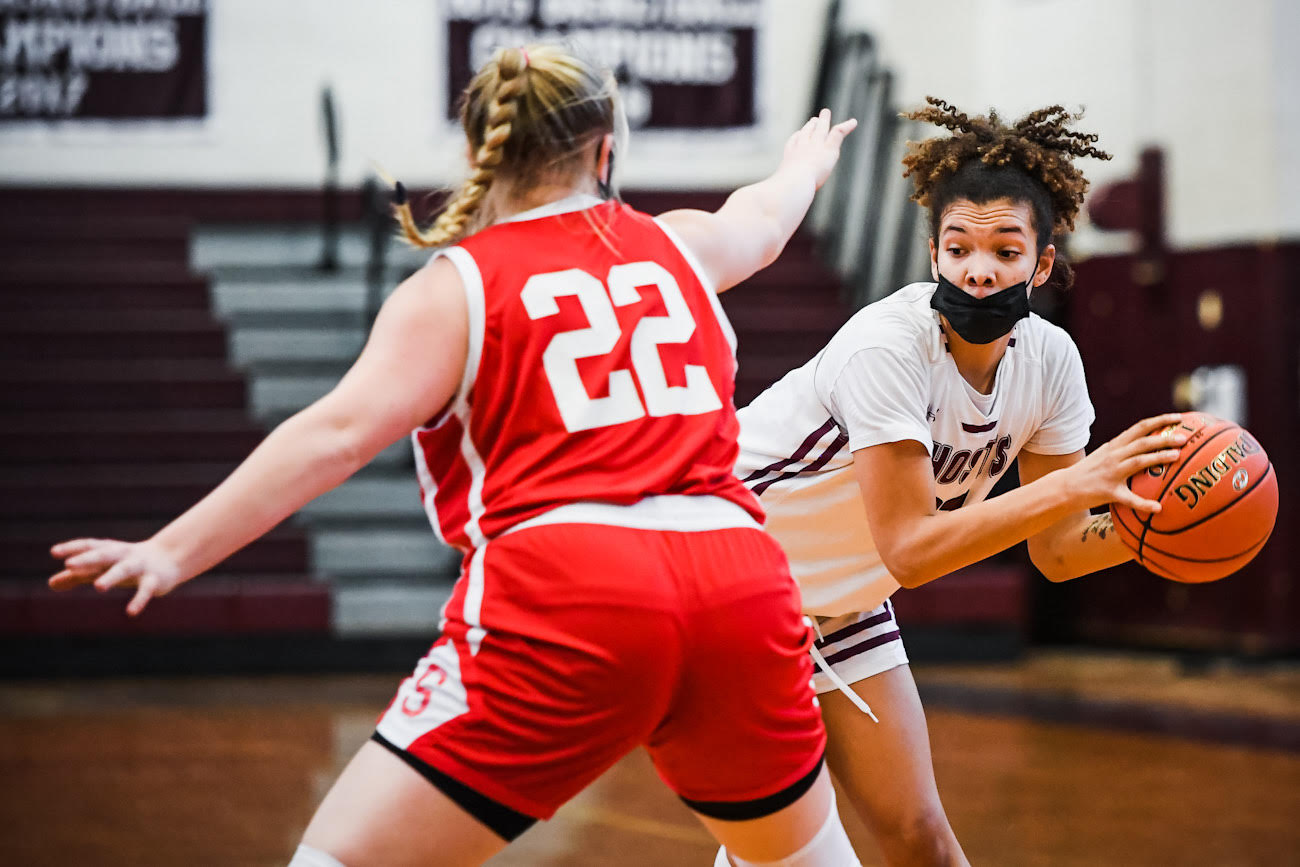 Abington’s Jaida Helm (21) looks to move the ball into the paint with Souderton’s Teya McConnaha (22) defending during their game on Thursday, Feb. 25, 2021. (James Beaver/For MediaNews Group)

“When we made the miracle shot, I told the team, ‘you have new life now. You gotta take advantage of it,'” Ghosts coach Dan Marsh said.

The last-second heroics were just getting started.

With the score deadlocked at 47 apiece in the dying seconds of overtime, Cire Worley lobbed a pass down low to teammate Jaida Helm, who layed it up and in with just a tick and a half left to play.

Souderton threw a pass down court that did not connect, and Abington held on for a thrilling 49-47 victory over Big Red Thursday night. “I was struggling all night and Cire trusted me,” Helm said. “We have three more big games coming up and this could give us a lot of momentum and energy.”

In a battle of two District 1-6A powers, Worley poured in a game-high 20 points, Khalis Whiting had 11 and Helm added nine.

“Souderton is so tough and they play in that tough division (SOL Colonial),” Marsh said. “Every one of their games is like this, so they have experience with that.

“We’re in a tough division too with Upper Dublin and PW but we’ve had only a couple close games all year. So to be able to persevere through that is big.”

Souderton (6-4 in the SOL Colonial) got a versatile performance from Teya McConnaha (14 points) but Big Red missed four crucial foul shots down the stretch in the fourth. “I feel bad for the girls. I thought we really played well for the majority of the game,” Souderton coach Lynn Carroll said. “Uncharacteristic of us, we just could not make a foul shot down the stretch and it seemed to be contagious.

Tight early >> Casey Harter’s drive to the hoop gave Souderton a 6-4 edge early but then Worley layed it up and in at the other end to even things up again.

Jordan Zimmerman put home her own rebound to break the deadlock but then Abington took a 9-8 lead at the end of the first quarter on a three by Amanda Jackson.

The two teams battled to a 13-all tie until Souderton made a move, going on a 6-0 run that included a weaving drive to the hoop by Harter.

Abington cut the deficit to 19-16 on a three by Browser, then crept closer when Helm made one of two free throws for the Ghosts to make it 19-17 Big Red at the break. The third quarter belonged to McConnaha.

Getting to the line, grabbing tough rebounds and also hitting from the outside, McConnaha scored 10 points in the quarter, her three just before the buzzer pushing Souderton’s lead to 31-26 entering the fourth.

“She was fearless out there,” Carroll said.

McConnaha had 10 rebounds and four blocks to go with her team-high 16 points. Zimmerman also played well for Big Red, making smart decisions and shooting well for her 14 points.

Harter’s breakaway layup stretched the Souderton lead to 37-28 midway through the fourth, but the Ghosts hung in. Worley scored six in the fourth, and Helm and Whiting each had four.

After a missed free throw by Big Red with just two seconds to play, Abington moved it up and Browser hit her three, sending the limited (due to social distancing) but spirited crowd into a frenzy. Big Red had a 46-43 lead in overtime thanks in part to a jumper by Zimmerman, but Abington eventually tied it on a pair of foul shots by Worley.

“Lynn does such a great job and I’m always afraid to play her but we’re always excited to play because it’s such a great game,” Marsh said. “We had another one of those tonight.

“It’s a huge win for us. We’ve struggled a little bit with selfishness, sometimes just playing one-on-one. And I told them, ironically, we win it on a non-selfish play. The play was run for Cire. And she saw Jaida and dished it to her and Jaida was able to finish it. I told them it’s important for us to recognize we won a game by being unselfish.”

Abington hits the court again on Saturday against Imhotep Charter.