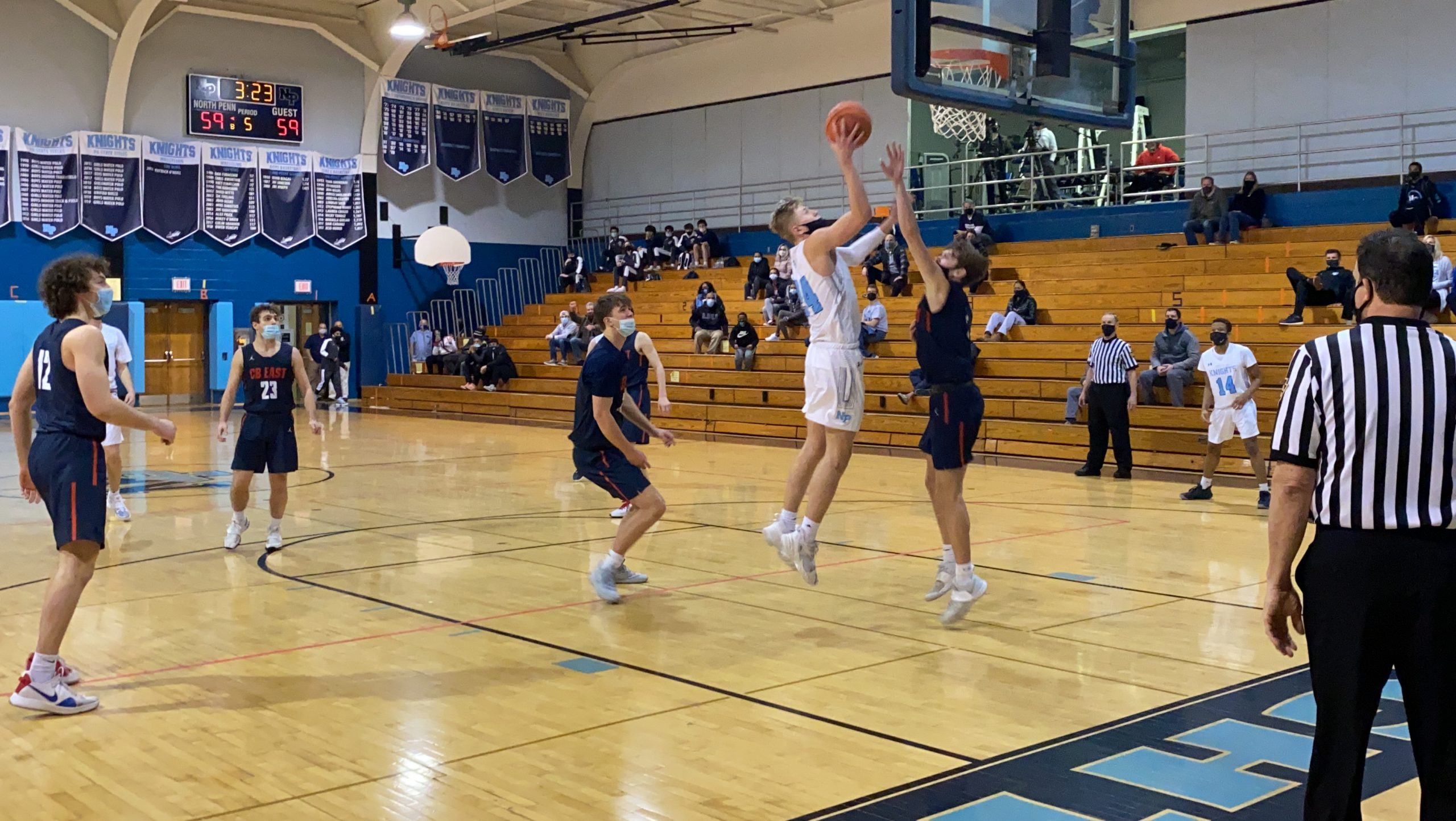 TOWAMENCIN >> The North Penn boys basketball team shored up its defense after halftime. A needed jolt to the offense came later – but just in the nick of time.

After Central Bucks East went out and posted 41 points in the opening half, the Knights held the unbeaten Patriots to just five in the third quarter to trail by just two.

East, however, began the fourth with a 9-2 burst capped by Joe Jackman’s consecutive baskets from for a 55-46 Patriots advantage.

“We talk all the time it’s a game of runs,” North Penn coach John Conrad said. “And they were up nine in the fourth and we talked about they went on a 9-2 run and now it’s our turn. That’s when our kids made the comeback.”

The Knights answered with an 11-2 run to pull level at 57 with 1:50 remaining in Tuesday night’s matchup. Jackman gave East back the lead only for Billy Coley’s basket at 29.7 seconds to send the game to overtime knotted at 59.

Josh Jones opened scoring in the extra session and North Penn never relinquished the lead after that – ended the game with a 25-11 surge to knock off the Patriots 71-66 and tie CB East for first in the SOL Colonial Division.

Jones had a game-high 25 points while Ryan Zeltt hit four 3-pointers in scoring 17 points for the Knights (5-2, 4-1 division), who won their fourth straight since back-to-back losses to Pennridge and Plymouth Whitemarsh.

Coley chipped in nine points, Milind Pulugura scored all eight of his points in the second quarter while all of Larkins’ seven points came in OT, the junior guard going 5-of-6 from the foul line.

“This is a great matchup to see how good of a team we were and I think we’re right up there with them,” Larkins said. “Obviously a little better.”

CB East (5-1, 4-1 division) used its depth and long-range shooting to lead by as much as 12 in the first half. The Patriots had nine players record at least two points before the break and connected on seven 3-pointers – three by Jackman. But in the second half CB East made just two threes, the second coming with 1.2 seconds left in overtime.

“Honestly, I think we were doing too much in the first half Xs-and-Os wise,” Conrad said. “And the second half we just played man and I thought the kids accepted the challenge well.”

Jackman scored 13 of his team-high 19 points in the first half while Jacob Cummiskey had 14 points for CB East.

“Once [Jackman] hits a couple shots, you know, it’s up to me and the other guys to just step up and take that one step further,” Larkins said. “We did just everything more aggressive, more harder.”

“We just got to stay focused,” Conrad said. “And we got to continue to play better defense.”

North Penn trailed 41-32 at halftime but began the third quarter with a 7-0 run – four straight points from Jones then a Zeltt corner three to make it 41-39.

Cummiskey put back his own miss to push East’s advantage to 43-39. Coley drained a three, pulling the Knights within one while a Larkins steal lead to Jones euro-stepping around a defender for a transition layup and a 44-43 lead – North Penn’s first since 2-0.

“He’s been in big games in multiple sports,” said Conrad of Jones. “He’s been there so he’s a leader in that regard as well.”

A friendly bounce off the back of the rim dropped a Cummiskey three in, putting East up 46-44 at the end of the third.

Cummiskey started the fourth with a three-point play at 7:39. Jones answered to cut the deficit to 49-46 but Jackman proceeded to have a hand in the next six – finding a cutting Brett Young to make it 51-46 then collecting consecutive buckets on drives, giving the Patriots a 55-46 edge.

Zeltt’s three-point play had NP down six with 3:55 to go. Brendan Harte got to the hoop for two to make it 57-49 but Zeltt hit a corner trey then chased down an offensive rebound and found Jones for another triple, slicing the margin to 57-55. Martin Sgro’s followed with a steal and fast-break layup to tie the game.

Jackman drove in from the left wing for a reverse layup, giving East what ended up being its last lead at 59-57 with 1:30 remaining in the fourth. Coley, however, got down the baseline for his own reverse layup just under 30 seconds.

“Just like always – trying to get the ball inside cause once it’s inside you can score or you can kick out to shooters,” Larkins said. “We have a bunch of shooters that can knock it down.”

The Patriots got the final possession of regulation. Jones blocked a Jackman effort off a drive with the ball going out of bounds to East with 4.6 seconds. Aidan Weaver’s foul-line jumper contested by Jones hit the front of the rim, tapped off the backboard then glanced off the front of the iron, sending the game to OT.

Jones scored inside off a feed from Zeltt to put the Knights up 61-59 with two Larkin free throws extending the lead to four. Cummiskey grabbed a rebound and took it down the court for a layup but Larkins answered with a runner to make it 65-61. Coley then found Zeltt inside for a six-point lead.

“That’s just the patience of basketball,” Larkins said. “Knowing that my time will come and that I have guys around me that can score and then I just step in when I’m needed, when they need me.”

A Larkins free throw with 18.5 seconds made it 68-61. East got within three after Jason Markowitz’s 3-pointer at 1.2 seconds but Larks hit two from the line at 0.3 seconds to seal the win.

In the first quarter, Harte’s layup off a Cummiskey assist capped an 8-0 run, giving the Patriots a 15-5 lead. East went up 20-9 after a Liam Cummiskey trey before North Penn scored seven of the period’s last nine points – two Jones free throws at 34.3 seconds making it 22-16 after eight minutes of play.

A basket by Jones to start the second quarter had NP within four but East responded with a 10-3 burst to go up 32-21 after a Jackman three.

Jackman’s third 3-pointer of the half gave the Patriots their biggest lead at 38-26. Consecutive baskets from Coley and Pulugura made it an eight-point game before Markowitz’s triple put the visitors ahead 41-30. Coley’s two after an offensive rebound had North Penn down nine at halftime.