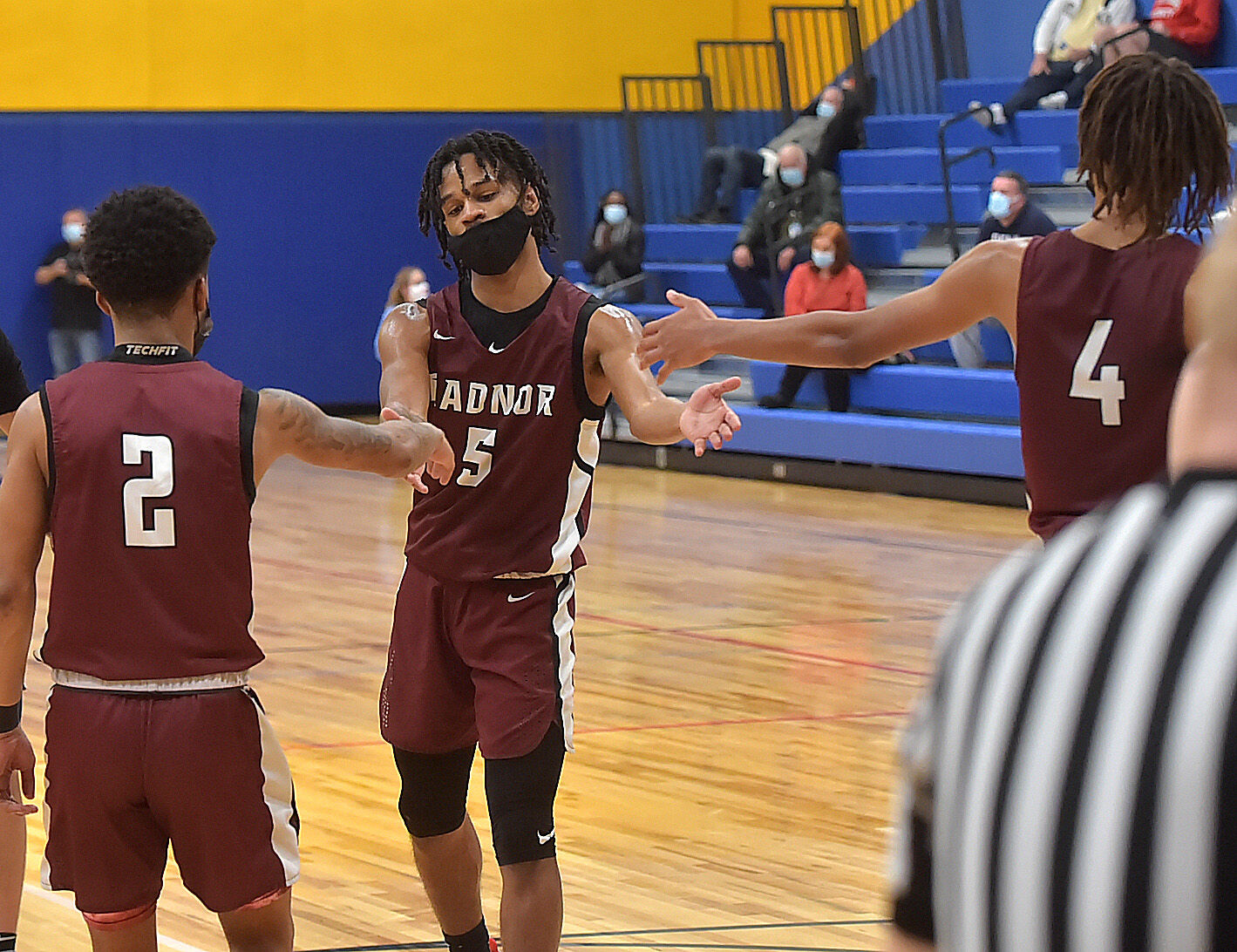 SPRINGFIELD — When you start three sophomores, as Radnor’s boys basketball team does, the question of who gets the ball in crunch time doesn’t always follow conventional wisdom.

Yes, Radnor’s eyes go first to Lew Robinson, the senior guard who has starred in the lineup since his long-ago sophomore season. But when defenses shift to negate Robinson, and Radnor searches for volunteers, the spotlight often falls on a youngster.

In Jackson Hicke, the youngest of the young, Radnor found a willing – and hot – hand Tuesday night. Radnor’s Jackson Hicke goes up for one of his two baskets in overtime to lead Radnor over Springfield 47-42 at Springfield’s new gymnasium Tuesday evening.
(Pete Bannan/MediaNews Group)

Hicke scored 20 points, including four in overtime, and grabbed eight rebounds to lead Radnor to a 47-42 win at Springfield’s brand-new gym.

While fellow sophomore starters Danny Rosenblum and Charlie Thornton saw significant minutes last year, Hicke didn’t. But the stringy soph had no qualms about taking the ball in overtime and driving the lane for jumpers.

“I think we’re generally a young team, three sophomores starting,” Hicke said. “So we’ve just got to take advantage of when we have the shots to take them, especially in a four-minute quarter.”

Plan A in the scoring scheme, Robinson, was unusually quiet. Two first-half fouls limited his playing time, and the explosive guard had just two points and four field goal attempts through three quarters.

Robinson would turn it on with seven points in the fourth and 11 for the game, including a clutch 7-for-7 at the line. But had Radnor waited for Robinson to turn it on, they would’ve left Leamy Avenue with a loss.

“Lew will always come up clutch,” Rosenblum said. “I trusted him on those free throws, even at the end of the game. He always gets his quiet points, and he’s a really reliable teammate.”

Instead, the sophs took control. With Springfield (3-2, 3-2 Central) flashing a high 3-2 zone and alternating presses, Hicke’s ability as a forward to put the ball on the floor was even more vital. He occupied the zone’s soft spot near the foul line, a conduit to get Rosenblum (six points, three assists, three rebounds), Thornton (seven points, four rebounds) and others involved.

He also called his own number, like nailing a 26-footer early in the fourth quarter to tie the game at 33, the seventh of 10 ties in an entertaining affair.

“For Jackson, we’re all used to it,” Rosenblum said. “He’s a really reliable shooter, and we can always count on him. And I’ve been playing with him for a while. In these big situations, he always comes up clutch.”

A Springfield sophomore nearly spoiled the party. Mike Hoey’s banked-in runner in the paint to end the first quarter was fun. His one-handed heave from behind the arc as the horn sounded on the third quarter put Springfield up 30-27 and set the momentum squarely on the Cougars’ side.

And Hoey’s confident 3-ball with seven seconds left in regulation tied the game at 40, forcing the extra session.

“It was transition and I saw that there were 15 seconds left on the clock, and I thought they were a good foul-shooting team, so they were going to end it (if it wasn’t a 3),” Hoey said. “I told Cole (Rhodes) that I would get him back for my airball. So I had to take that shot, and when I took it, I felt really confident. I just knew it was going to go in.”

Hoey and Terrence Cobb hit three 3-pointers each, tallying 11 points apiece. Rhodes, whose aggression off the dribble put Robinson into foul trouble, tallied 16 points, including 8-for-10 from the line. Center Brendan McShane operated the offense with his high-post passing (three assists) and screening.

The teams traded buckets to open OT, Rosenblum feeding Hicke for a mid-range jumper before Rhodes put back a second-chance bucket. But Hicke put Radnor ahead for good two possessions later, after Hoey couldn’t hit a decent 3-point look, and the Cougars went cold on their last four possessions. Springfield’s Mike Hoey celebrates after tying the score with a 3-pointer with seven seconds left in regulation Tuesday. But the Cougars fell, 47-42, in overtime against Radnor. (Pete Bannan/MediaNews Group)

It denied Springfield, rebuilding from just one win in the previous two seasons, yet another win, though the Cougars’ three wins this season deservedly indicate progress.

“It just makes us feel more motivated in games,” Hoey said. “A loss definitely hurts, but we’re going to come out hungrier the next game and get the win there.”

Brighter days are ahead for Radnor and its youthful contingent, too. If Hicke’s growth from the opening loss to Lower Merion to Tuesday is any indication, the present isn’t bad, either.

“They help me a ton,” Hicke said of his fellow sophomores. “The first game, I struggled and was nervous, but they keep encouraging me and keep me confident, and it helps me hit shots like I did today.”

Conestoga 60, Garnet Valley 52 >> Senior center Andrew Fox tallied nine of his 17 points in the first quarter to get the Pioneers off to a fast start. Jake Liedtka added 13 points.

Penn Wood 74, Interboro 37 >> Abdul Dublin scored all 13 of his points in the first half to lead Penn Wood to its first win of the season.

Sayo Kenneth and Naeem Purnell led the attack with 14 points apiece. Dublin and Kenneth tallied eight points each in the first quarter to help the Patriots open up a 26-8 lead.