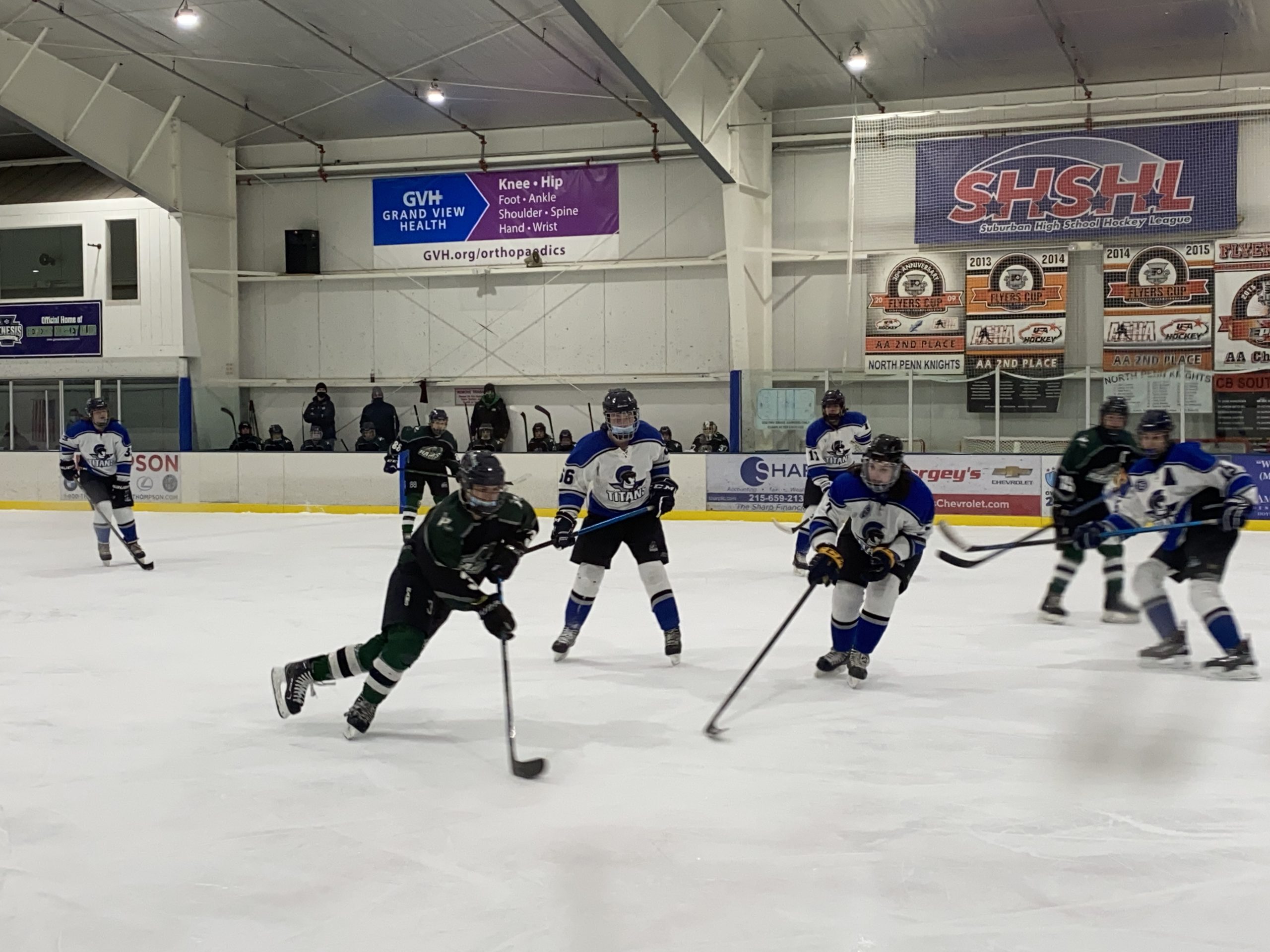 Ryan Schuler carries the puck in the Central Bucks South zone during their game on Thursday, Jan. 21, 2021. (Mike Cabrey/MediaNews Group)

HATFIELD TWP. >> Pennridge ice hockey’s Blake Stewart settled into a spot close to the right post and waited for a pass he was certain would soon arrive.

“I knew Richie [Shanks] would eventually see me,” he said. “It’s just that sixth sense we have together. And without them I wouldn’t be putting up points or same thing with them. We just work great as a team, all night.”

Shanks slid a pass right to the stick of the Rams senior captain, who one-time a shot into an open net for his second goal and a 4-1 lead over Central Bucks South with 7:50 left in the third period of their SHSHL Continental contest Thursday night at Hatfield Ice.

Aeryk “Rico” Lehrhaupt added his second tally with 1:09 remaining to cap a strong finish that combined with a solid start to give Pennridge a 5-1 victory over the Titans.

“First period we looked really good and we kind of dozed off in the second, coach tells us to wake up and we’re back in it in the third,” Lehrhaupt said. “But when we play some better teams we’re going to have to play all three periods better than that.”

Goals from Aidan Boyle and Lehrhaupt gave the Rams a 2-0 advantage after the opening period. The Titans pulled within 2-1 after Aydin Thierolf got to the front of the net and scored at 9:29 in the second. But Stewart – who is set to play golf at Jefferson University – pushed the margin back to two off a feed from Andrew David just 68 seconds later.

Pennridge kept the momentum in the third, pulling away on strikes from Stewart and Lehrhaupt to pick up its second straight win.

“I’ve been playing with these guys since sophomore year and last year and there’s nothing but up,” Stewart said. “All the chemistry we have and all this, I’m very confident in this group. I’d say we’re not the greatest but like the most chemistry team in the league cause we have only a couple freshmen but they’re fitting in right there.”

The Rams finally got their season going last week as they along with the rest of the SHSHL try to navigate a regular season that runs through March in the middle of the COVID-19 pandemic.

Both teams are back at Hatfield Ice for their next games – the Rams face Council Rock South 7:20 p.m. Wednesday with the Titans taking on Souderton 8:30 p.m. Thursday.

“It’s a little tough, I don’t have my legs like I used to it but I’m getting them back,” Stewart said. “And then just with the team we only had two practices before coming into the season so we’re still trying to figure out what we need working on, we can we add more to our repertoire and all that.”

Boyle posted the opening goal, ripping in a wrister from the slot at 6:47 in the first period. Lehrhaupt double the lead at 4:10, opting to take a try at goal from the right side that proved successful.

“Defenseman took the pass and I saw the goalie was off the post, so I just figured I should put it on net,” Lehrhaupt said. “Maybe get a rebound but it went it.”

Thierolf’s tally had South within a goal at 9:29 in the second but Pennridge had a quick response – David skated behind the net then connected with an incoming Stewart for a goal at 8:01.

“I play with Andrew David and Richie for club, too so just throughout the whole year and even last year I played with them too from before I was hurt,” Stewart said. “It’s just almost like in the back of my mind I have an idea where they’re going to be and it’s almost like a sixth sense, cause I knew he was going there and I knew I had to get there.”

After Stewart one-timed in Shanks’ pass for a 4-1 edge with 7:50 left in regulation, Lehrhaupt collected his second – getting space on the left side to wrist a shot in at 1:09.

“That short side was there again so I figured just put it on, it worked once,” Lehrhaupt said. “It went in for me so no complaints.”

Youth is served for Pennridge in win over rival Souderton
Garry, Wissahickon roll past Plymouth Whitemarsh