Two wins and a Senior Night for Pottsgrove in opener 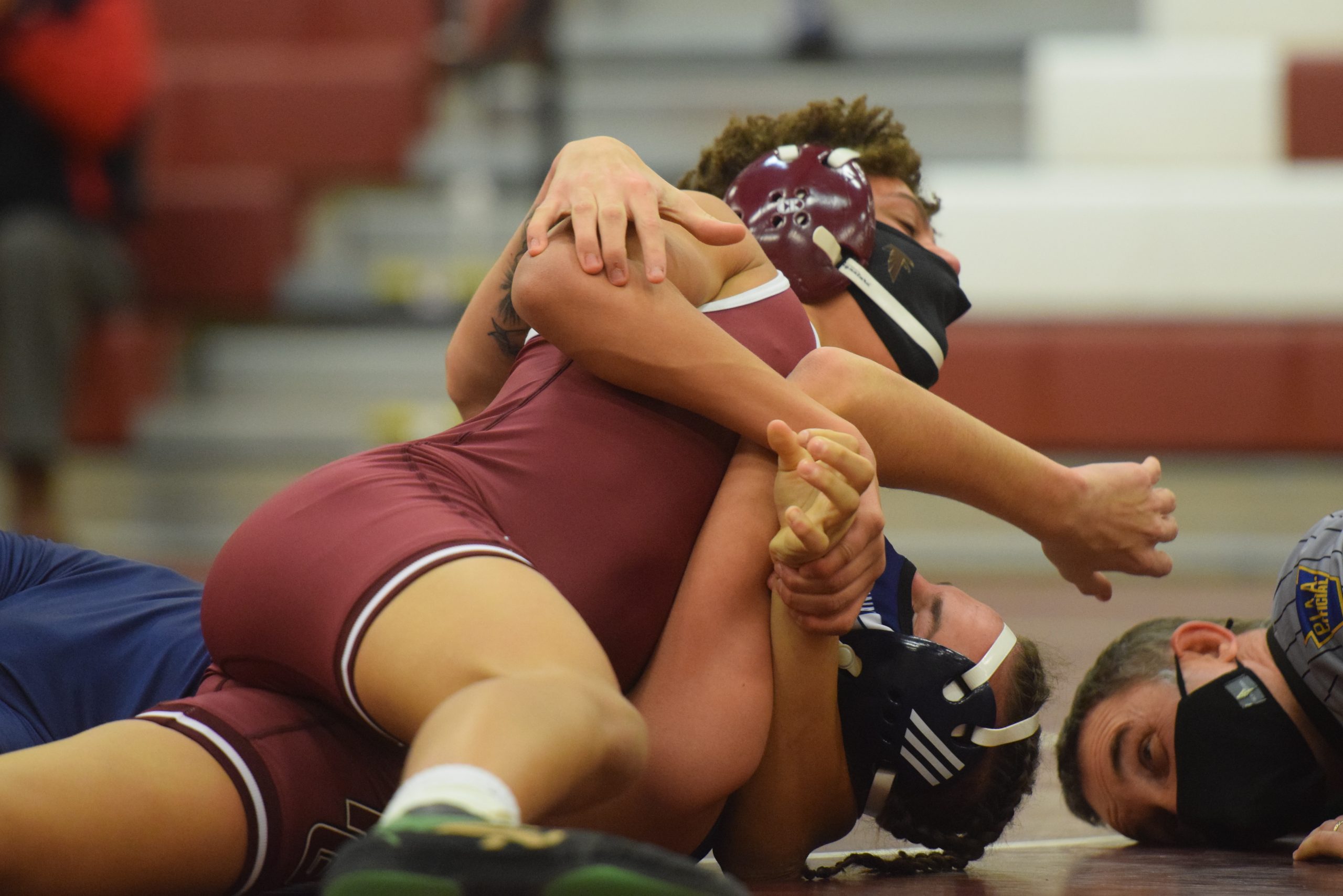 LOWER POTTSGROVE >> It’s unusual to picture a high school honoring its senior athletes during their first contest of the season, as opposed to their last home event.

Then again, given the abnormalities of the “new normal” brought into play by the coronavirus, it makes all the sense in the world.

Tony Lindgren and Manny Allen reveled in that recognition Thursday. The lone seniors on Pottsgrove’s 2021 roster, and their parents, were feted in-between the Falcons’ Pioneer Athletic Conference double-dual with Pottstown and Upper Merion, then took part in their team’s sweep of its Frontier Division guests.

“It’s not that bad,” Allen said of the team’s low number of 12th-graders. “We have a bunch of other guys who are showing leadership. Everybody shows up to do their work.”

Pottsgrove (2-0) flexed its numerical superiority in the wins over the Vikings (54-6) and Trojans (51-18). Against a couple undermanned opponents, it filled nine of 13 lineup spots against UM’s (0-2) four, and 10 to Pottstown’s nine. Pottsgrove’s Nathan Gillin, left, gets the match-sealing takedown of Pottstown’s Juliana Figueroa late in the third period of their bout at 132 pounds Thursday at Pottsgrove. (Austin Hertzog – MediaNews Group)

Against the Trojans, though, the home team had a 5-1 edge in falls. Four of them were scored in the first period, Allen and Matt Bechtel both posting theirs in the first minute at 285 and 152, respectively.

“It’s been pretty good,” Lindgren said. “We’ve got a great group of guys. We make sure everyone is putting in their work … going out and getting things done.

“At times like this, you have to be teammates.”

In the match with undermanned Upper Merion, Pottsgrove swept the three contested weights on pins. Dominic DeMeno needed just 77 seconds to get the slap at 215, Matt Bechtel recorded his drop at 152 in 1:50 and Dominic Sithens’ 4:53 fall provided the match clincher at 189, giving the Falcons a 36-6 lead with three weights left.

UM’s points came from a forfeit of 126 to Ayden Cheng.

“We started the season with more,” Viking head coach Chris Falcone, who took over the program from Tim Harner after five years of assistant coaching, said. “We had 11, but only four tonight. In the lone bout scored by decision, Nathan Gillin outpointed Pottstown’s Juliana Figueroa 6-2. Gillin carried a tight 3-2 lead into the third period before scoring a bottom-start escape and takedown in the final frame.

“The kids are ready and staying committed,” Pottstown head coach Nick Wade noted. “We preach how wrestling can put you in position for lifelong success.”

The brightest spot for the Trojans came at 189, where Devon Green scored a 4:49 pin. Their other points came on forfeits received by Avon Jones at 145 and Mia Bumbarger at 160.

“We had 19 to 20 wrestlers at practice, then it dropped down,” Wade said. “We dealt with breaks — a late start, then three weeks off (December). Whatever gets us safer.” Lindgren, who received a pair of forfeits at 106, is planning to expand on his involvement in Pottsgrove’s Junior Reserve Officer Training Corps (JROTC) following his graduation. He’s enrolling at Jacksonville (Fla.) University, where he will participate in ROTC training toward the goal of becoming an officer in the United States Marine Corps.

“It’s something I wanted to do since I was in sixth grade,” he said. “I have two brothers-in-law who were in the service, and my father was in Navy intelligence.”

He’s also looking at the possibility of playing lacrosse for the Dolphins, continuing his involvement in the sport at the high-school level.

Allen, in turn, is heading to Delaware Valley University to participate in football and wrestling while studying sports management. For the immediate future, however, a bit of personal business remains. NOTES >> Prior to the first match, a moment of silence was held in memory of Todd Van Horn. The district’s Dean of Students, a three-sport star at Phoenixville (1987) and football standout at Millersville University (1992), died this past October at 51. … Wade on his wrestlers’ adapting to face masks: “I’m waiting to see how we do in battle: Six minutes and overtime. It seems like everyone is adapting well.” … Falcone sees Cheng, who put together a 28-7 record his junior year, as UM’s main man. “He has the potential to qualify for districts,” he said. “If he wrestles the way he can, he should qualify.”