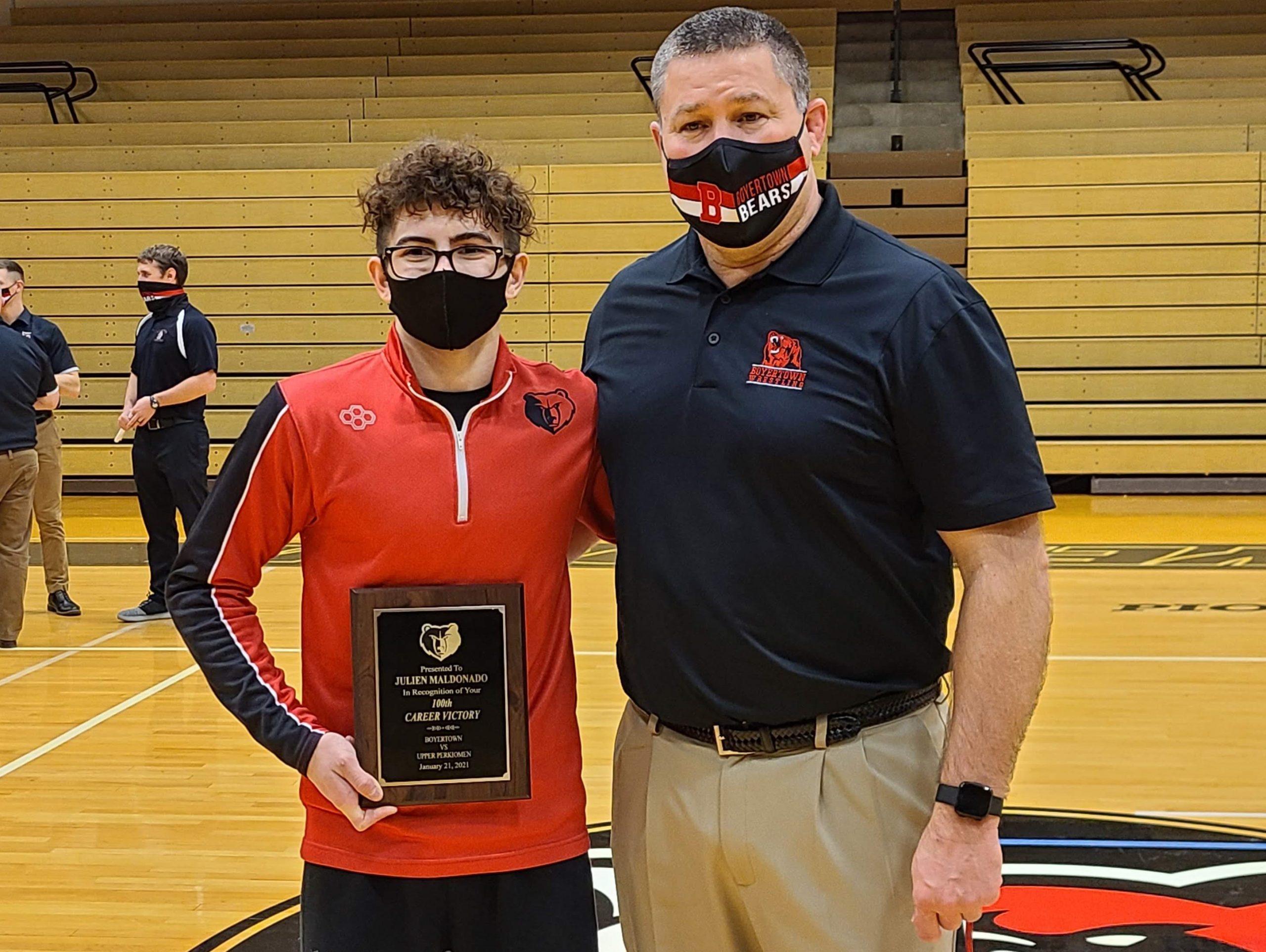 Jay Maldonado had a lot of time to wait on the doorstep of the 100-win milestone.

The time wasn’t the problem for the Boyertown senior though. It was the frustration that he didn’t finish the job a year earlier at the PIAA Class 3A Championships.

“After last year I had a chip on my shoulder. I should have pushed harder at states so I was a little salty about that,” Maldonado said, reflecting on closing his junior year by losing two straight after making the PIAA quarterfinals. “I’m coming back even harder this year to try to make up for it and get on top of that podium.”

Entering his senior season on 99 wins, Maldonado made quick work of the first item on his to-do list by topping Upper Perkiomen’s Joey Carpenter 4-0 to earn his 100th win in Boyertown’s 54-8 Pioneer Athletic Conference victory at home Thursday night.

“I feel great about it. It’s been my goal,” Maldonado said. “My uncle (Jeff Sloan, Class of 1990) is on the board. I beat how many wins he had and so it’s been my goal to keep going higher.”

Maldonado is the 34th Boyertown wrestler to achieve the triple-digit mark.

He placed eighth at states as a sophomore and went 32-8 a year ago, including championships at the District 1-3A North and Southeast 3A Regional tournaments at 113 pounds.

It was an excellent season that caught a sour finish.

“I should have been shooting at states. I wrestled in the (quarterfinals) against Aidan Lewis (of Cedar Cliff) and it was close, but I didn’t do enough,” he said. “I could have made it to the finals but I choked. I just have a chip on my shoulder because I want to be on that podium again.”

Luke Heimbach (120) and Maldonado (126) opened with decisions. UP’s Tyler Hoffer followed with a technical fall at 132 to make it 6-5 Boyertown, but that’s as close as the match would be.

Jimmy Sinclair (189) and Anthony Bauer (215) won via pins while Gavin Sheridan (106) and Asher Sigler (113) won decisions for the Bears, which benefitted from five forfeits.

Keaton Durning’s decision at 145 was Upper Perk’s other win.

The pandemic-altered season defies tradition with masks worn during competition, little or no spectators and teams only facing in-league opponents as opposed to a normal season featuring duals and weekend tournaments.

“We don’t have the time to get the clunkers out this year. But I’m trying to make sure I don’t have any clunkers at all,” Maldonado said.