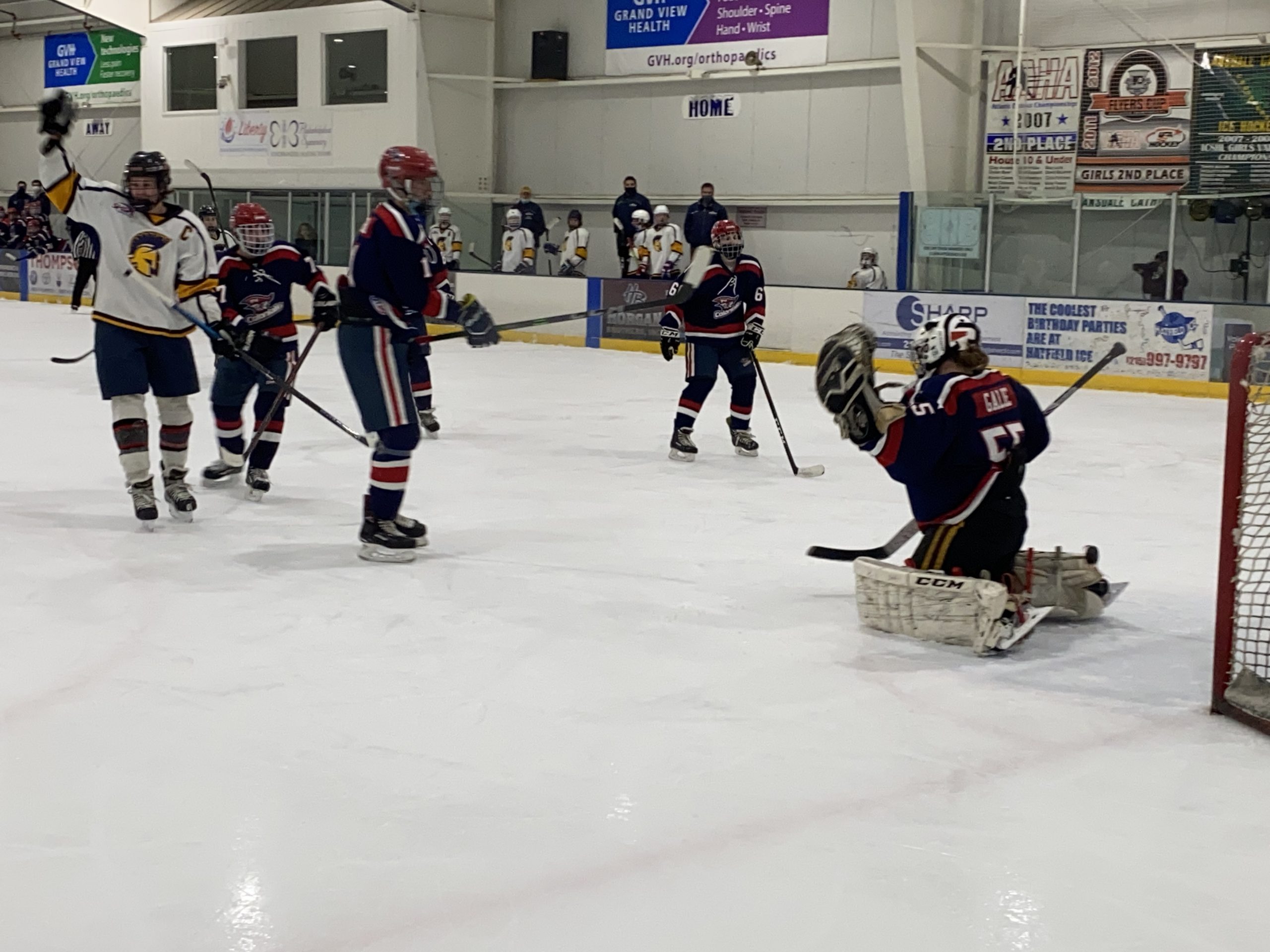 Wissahickon's Bryan Garry celebrates after his goal in the second period against Plymouth Whitemarsh on Thursday, Jan. 21, 2021 (Mike Cabrey/MediaNews Group)

HATFIELD TWP. >> As his goal count increased Thursday night, the joy of putting the puck into the net never diminished for Wissahickon ice hockey’s Bryan Garry.

Even more satisfying was that his production led to a Trojans’ victory.

After Plymouth Whitemarsh chopped Wissahickon’s lead to 4-2 in the first period, Garry proceeded to score the next five goals, finishing the contest with a total of six goals to help the Trojans pull away for a 9-3 SHSHL American victory over the Colonials at Hatfield Ice.

“They beat us in the [SHSHL Class A] championship last year, I just thought we should return it to them,” Garry said. “I’m a senior this year, so all my practicing kind of just led me [to this]. I don’t know, our team played well, I played well. It just came together.”

Garry, who also had an assist, helped Wissahickon’s attack continue to stay hot early – the Trojans (3-0-0) have 28 goals since last week’s start of the season,  scoring 11 against William Tennent last Wednesday in their opener then tallying eight against Hatboro-Horsham Wednesday.

Nick Hussa had two goals and three assists while Daniel Glazer added a goal and two assists for the Trojans.

“He did quite well considering he just started playing,” said Trojans coach Kenneth Harrington of Bonanni. “He just took it up in an emergency so to speak last year for Flyers Cup, our goalie got suspended and couldn’t play so Michael agreed to play and he loved it and his parents took him to training.”

“All the masks and all that stuff but, hey, at least we’re playing,” Harrington said. “We’re finally playing.”

Wissahickon and PW combined for seven goals in the first period – Garry’s scoring the opening tally 1:34 into the game. A pair of Hussa goals sandwiching a Glazer strike made it 4-0 Trojans before the  back-to-back goals from the Colonials’ Jack Mishkin and Jeffrey Mencken cut the margin in half at 7:01.

Garry, however, put Wiss up 5-2, driving to the net from the right side for a short-handed goal at 2:37.

“We only have 11 skaters when everyone shows up so it’s from my perspective I want discipline and don’t take too many penalties, you know what I mean just good penalties if there is such a thing cause our bench is short,” Trojans coach Kenneth Harrington said. “But it’s kind of good too because some of the guys that are younger they’re on every other shift.

Just 47 seconds in the second period, Garry extended the Trojans’ lead to four, ripping in a shot from the slot. Garry made it 7-2 on a 5-on-3 power play, taking a cross-ice pass from Hussa and sending the puck into the net at 10:56.

“Originally this year I wasn’t going to play high school cause I was going to play juniors and couple teams turned me down,” Garry said. “I should be probably playing in like the USHL and stuff but I mean I’m happy to come in this league and show people where I should be.”