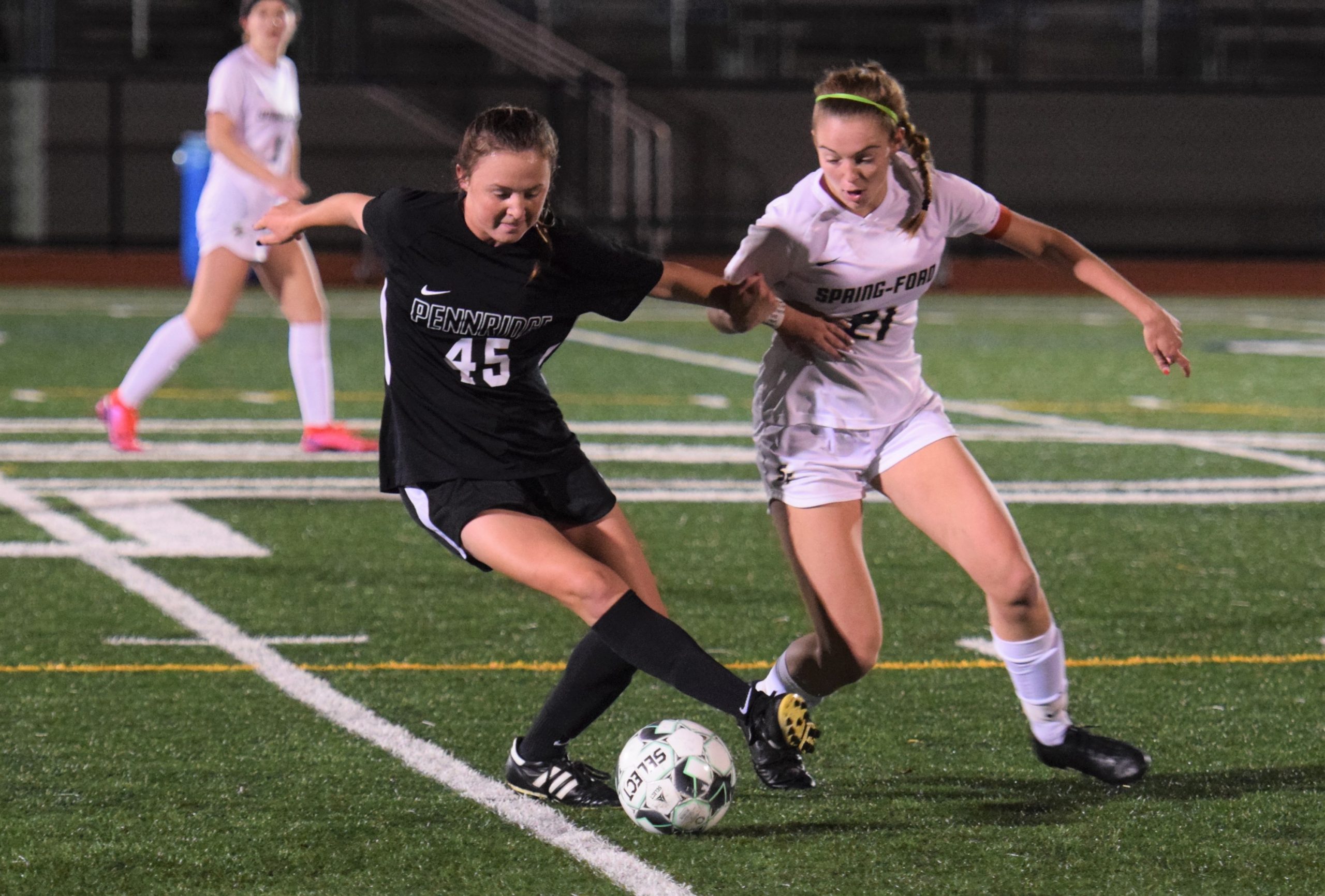 In many ways, it’s difficult to pin down Lindsey DeHaven’s most defining trait or moment.

That’s no knock on the Pennridge senior but a statement on the myriad ways she impacted games for the Rams girls soccer program. A four-year varsity starter, four-time SOL conference champion, two-time District 1 winner and now state champion, DeHaven’s game is broad in many ways but easy to sum up in one.

Simply, the Pennridge co-captain is a winning player.

The keystone piece in the Rams’ state title run, DeHaven has been tabbed The Reporter/Times Herald/Montgomery Media Girls Soccer Player of the Year for 2020.

“She was such a big presence in a part of the field where we didn’t have big bodies, people always say it doesn’t matter the size but she played huge,” Rams coach Audrey Anderson said. “It was crazy the amount of balls she won out of the air. If I could clone Lindsey, I’d have her as a target forward, a center mid, an attacking mid and a holding mid, she’s so great in any of those roles.”

DeHaven arrived to the program in 2017 and fit right into the starting lineup as a center forward despite usually being the smallest player on the field. She’s not much bigger now, but DeHaven felt she grew into her body this past summer and being that extra bit physical helped her excel in a demanding position as the team’s holding midfielder.

With the Rams needing to replace a pair of tenacious ball-winning midfielders in Maddie Anderson and Chance Hendricks this fall, Anderson turned to DeHaven. The senior had all the required skills, the challenge would be how she navigated her attacking mentality through the defensive responsibilities of the position.

“(Head coach) Audrey (Anderson) and (assistant coach Jason Lollar) asked if I was OK with it, and of course I wasn’t going to say no but it was a little nerve-wracking trying to fill those big shoes,” DeHaven said. “I had a supportive team around me and our defensive line was so strong, I knew I’d be fine and could work in the first couple of games.”

Balancing her attacker’s mindset with defensive discipline took a little adjusting for DeHaven but Anderson knew the senior’s feel for the game would help there. Whether at forward or midfield, DeHaven had always excelled playing the ball in the air and her knack for winning headers was a prerequisite for the holding role.

Winning the ball out of the air is something even tall players can struggle with, but DeHaven never wanted her size to be a detriment.

“You have to be a little brave and trust in your abilities,” DeHaven said. “You have to believe you can come out with the ball. It really just comes down to the support of my teammates all four years. Even if I was nervous, they gave me that reassurance that I could do it.”

Again, it was that inability to shoehorn DeHaven into a single mold that led Anderson to give the senior more leeway offensively. A midseason injury forced the Rams to change some things in their formation and they needed DeHaven to get more involved in the attack, as long as she wasn’t totally ignoring her defensive duties as well.

DeHaven could still win the ball further up the field but it was her ability to connect the short passes or navigate through defenders that gave Pennridge a little extra punch.

“We told her if you can go forward and get back, go for it because what she does offensively is hard to defend,” Anderson said. “When you have Liv Grenda in front of her, those two are hard to match up against so we gave Lindsey free reign based on how she was feeling.”

DeHaven responded in turn with an eight-goal, 10-assist campaign and countless balls won on the ground or in the air during the team’s postseason run. In the biggest matches, DeHaven put defensive work first and knew her team needed that from her more than another shot attempt going forward.

“I could gauge what the team needed the first couple minutes and decide what I should do,” DeHaven said. “I got a lot of assists off free kicks and a couple goals off corners, but my defense held it in or even Liv would drop in when I went forward. Our team, we had such a family feeling, it helped a lot being able to get those goals and assists as a defensive player.”

Not only that, but there was some pain involved too. DeHaven gutted through a strained hamstring the last week of the season, giving her team all she had in two tense, trying games with Parkland and North Allegheny in the state tournament. DeHaven described the injury as not a full muscle pull, but something she felt with every step and something she had to be mindful of.

Needing DeHaven on the field, the coaches asked her to dial back some of her runs forward that last week but they still needed every bit of her energy. In the state final, a halftime adjustment tagged DeHaven with dropping in to help the back line with a North Allegheny player who wanted to dribble backward and create runs from the gaps she created doing so.

“It was very emotional and very tolling on the body physically and mentally but the way we as a team had been talking about getting there and actually being there and going through it, it was like a dream,” DeHaven said. “It’s still hard to talk about, it doesn’t feel real but I wouldn’t have wanted my senior season to end any other way.”

Despite that, the senior managed to author two of her most important performances in a Pennridge uniform, helping deliver the program’s first state championship.

“She stuck out,” Anderson said. “She was the person the others looked at and saw ‘Lindsey’s not panicking so we’re still in this game.’ To have the amount of freshmen we did on the field looking toward Lindsey and knowing she wasn’t going to panic was huge.”

While there’s no shortage of DeHaven winning a header over a bigger player, slipping a five-yard pass right to a teammate’s feet or a jubilant expression after a goal to sift through for that defining moment, there’s another option.

After most every win at Helman Field, it was common to see DeHaven surrounded by four, five or more young players with the varsity player giving all of them time and thanking them for coming. As a little kid, she was in that same spot and felt it was important to pass on the same kindness former players had shown her.

“It could be scary going up to them so even when I was younger, I would always think when I get to high school I’m going to be the person who wants them to come over and say hi or ‘good game,’” DeHaven said. “I work with Audrey at Deep Run, so I think a lot of them know me from being around the field but it’s still important to thank them too because they’re our biggest supporters.”

DeHaven has signed with High Point and said she’s excited to start the whole process over again at the college level. She can leave comfortably, knowing the Rams’ underclassmen more than proved themselves this fall and is eager to see what the team accomplishes over the next few years.

Of course, there will be a glaring DeHaven-sized hole for the Rams to fill, one Anderson joked she doesn’t even want to think about until the calendar reads 2021. Players can fill in bits of DeHaven’s role collectively, but finding someone else who can do that much is the challenge.

“She was every role you need on the field in one package,” Anderson said. “When you have somebody who can do it all, she could do the job of three girls at once, it’s tough to replace.”