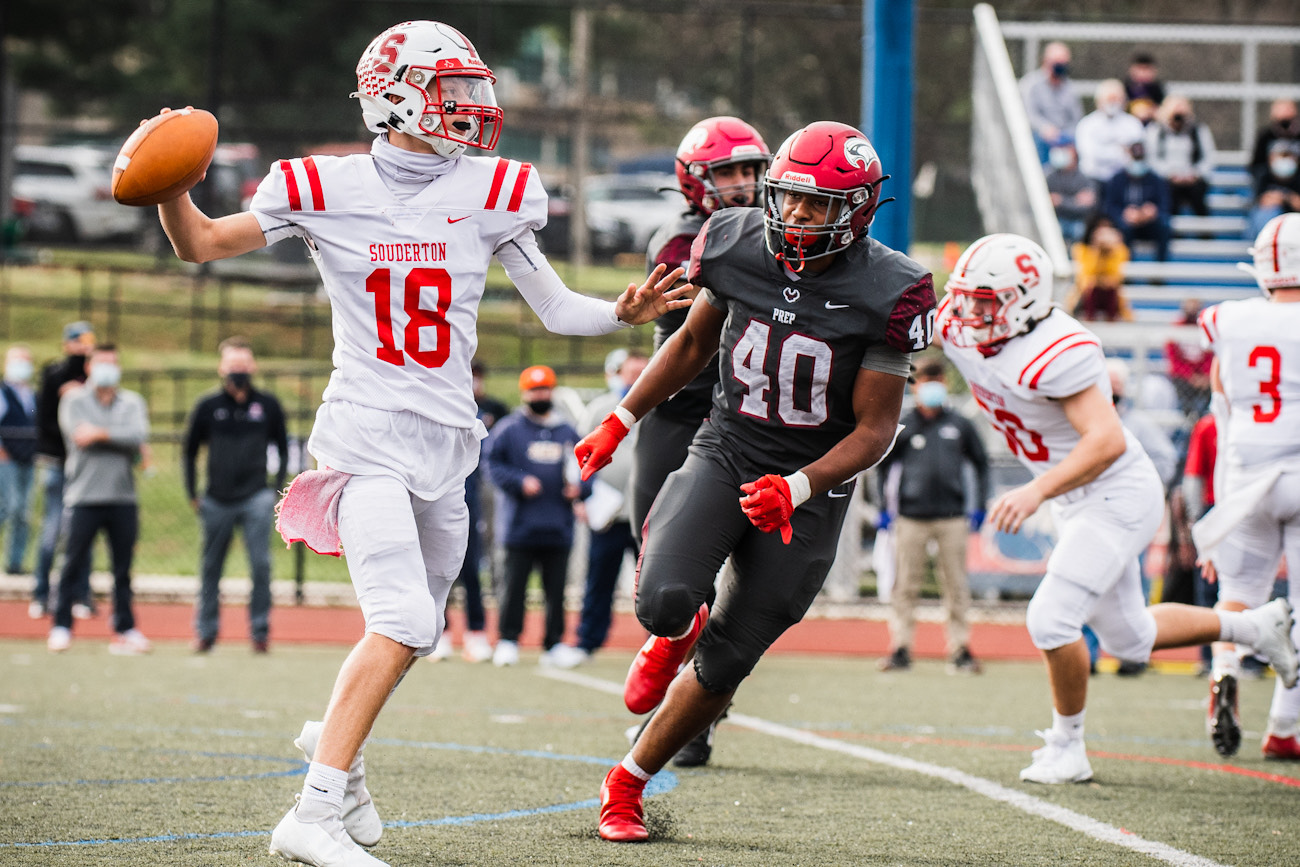 Last Saturday’s 51-43 loss to St. Joseph’s Prep in the PIAA Class 6A semifinals did little to diminish Souderton football coach Ed Gallagher’s  view of what the Indians accomplished in 2020.

“It was a great season,” Gallagher said. “I said that to them at halftime, I said it to them after the game, I actually said it to them before the game. You belong here. You’re District 1 champs. You won one of the best districts in the state, all right, at the highest level. No one is ever going to take that away from you. You’re Continental Conference champs. You’re a very good football team.”

The COVID-19 pandemic made the fall season a difficult and unpredictable one for every sports team, but Big Red found not just a way through it, but a way to set new benchmarks for the program – the last of which was reaching the state semifinals for the first time.

“Great season,” Souderton senior quarterback/safety Evan Kutzler said. “This is probably the best team we’ve had in Souderton history and to make history this season and go out like we did playing the No. 3 team in the nation in the semis of states, it was great, it was great, so I just love the way this season went. And we fought through adversity and we went out with a bang.”

The Indians, who left Cardinal O’Hara Saturday with a 7-1 final record, claimed their first Suburban One League conference championship since 2007, rolling past its four Continental opponents by a combined score of 150-40 including a 28-7 victory over Upper Dublin, which won the District 1-5A title.

Souderton won its first district playoff game since 2006, ending a six-game playoff losing streak by holding off Spring-Ford 27-24 in the district semifinals. A week later, the Indians earned their first-ever District 1 championship with 31-17 victory over host Pennridge.

“It was an outstanding season,” Gallagher said.  “Love these kids. Just love what they were able to do. They brought pride to our community. I said to them in the huddle at the end. I’m looking at their chests and seeing Souderton across it and I said you guys brought so much pride to this community during such an awful year that everyone in the country and everyone in the world’s having with the pandemic. They brought so much pride to Souderton.”

It was a tough task going up against Prep. The two-time defending PIAA-6A champs are ranked third in the nation by both Maxpreps and USA Today and in the first half the Hawks showed why.

Prep quarterback Kyle McCord, an Ohio State commit, tossed six touchdowns passes before halftime as Prep built a 44-7 lead at the break. Malik Cooper’s 85-yard kickoff return touchdown to open the second half made it 51-7.

But the Indians were not going to pack it in.

“Just finish out strong, you can’t finish a season not trying,” Kutzler said. “I mean, you have to go out for your brothers and doesn’t matter the score, just go full, all-out, 24/7 and we did that. And I’m glad that we could put up a fight and finish the season with my brothers, for sure.”

Kutzler tossed three touchdowns – the first to Kyle Bob, the last two to Shaun Purvy – as the Indians scored the last 36 points in a second half that had a running clock due to the 35-point mercy rule. The Indians battled right down to the very end – Brayden Porter scoring a 6-yard TD run with just three seconds left.

“What an experience for these kids,” Gallagher said. “And we said that all week. We might not be able to match up but you’re going to fight and you’re going to keep playing and if they’re that much better and they beat us then that’s the way it goes. But let’s go out and fight and we did and they kept fighting in the second half and again, just awesome, great effort.”

State Finish for McDevitt >> Bishop McDevitt’s 42-14 loss to Southern Columbia in the PIAA-2A semifinals last Saturday did not mean just the end of the Royal Lancers’ season but likely the final game of the program.

Last Wednesday, the Archdiocese of Philadelphia announced it will close both Bishop McDevitt and Hallahan at the end of the academic year.

McDevitt was making its first-ever appearance in the state semifinals and ended the season at 4-2, its two losses coming to a pair of state powerhouses – Archbishop Wood 35-14 in its season opener then to Southern Columbia, which advanced to play for its fourth straight PIAA title.

Fifth-year coach Mike Watkins has made the Lancers into one of the state’s better 2A sides with the team last year winning the District 11/12-2A title and advancing to the state quarterfinals. Watkins took over McDevitt from legendary coach Pat Manzi, who led the Lancers for 33 seasons, winning PCL overall titles in 1986 and 1987 and the PCL Blue title in 1999.

TURKEY DAY >> Pennridge and Quakertown are still slated to continue their annual Thanksgiving Day rivalry with this year’s edition being hosted by Quakertown at 10:15 a.m.

Pennridge has won its previous five meetings with the Panthers, including the last four on Thanksgiving – last year claiming a 19-13 victory at Helman Field to improve their lead in the rivalry’s holiday contests to 57-28-5.

The Rams come into Thursday’s game 6-1, their lone loss to Souderton in the District 1-6A final. Quakertown enters 5-2, falling to Souderton 28-23 in its season opener then winning five straight before a 35-28 loss to Perkiomen Valley Nov. 13.