Plenty of factors at work in Pennridge’s PIAA title win 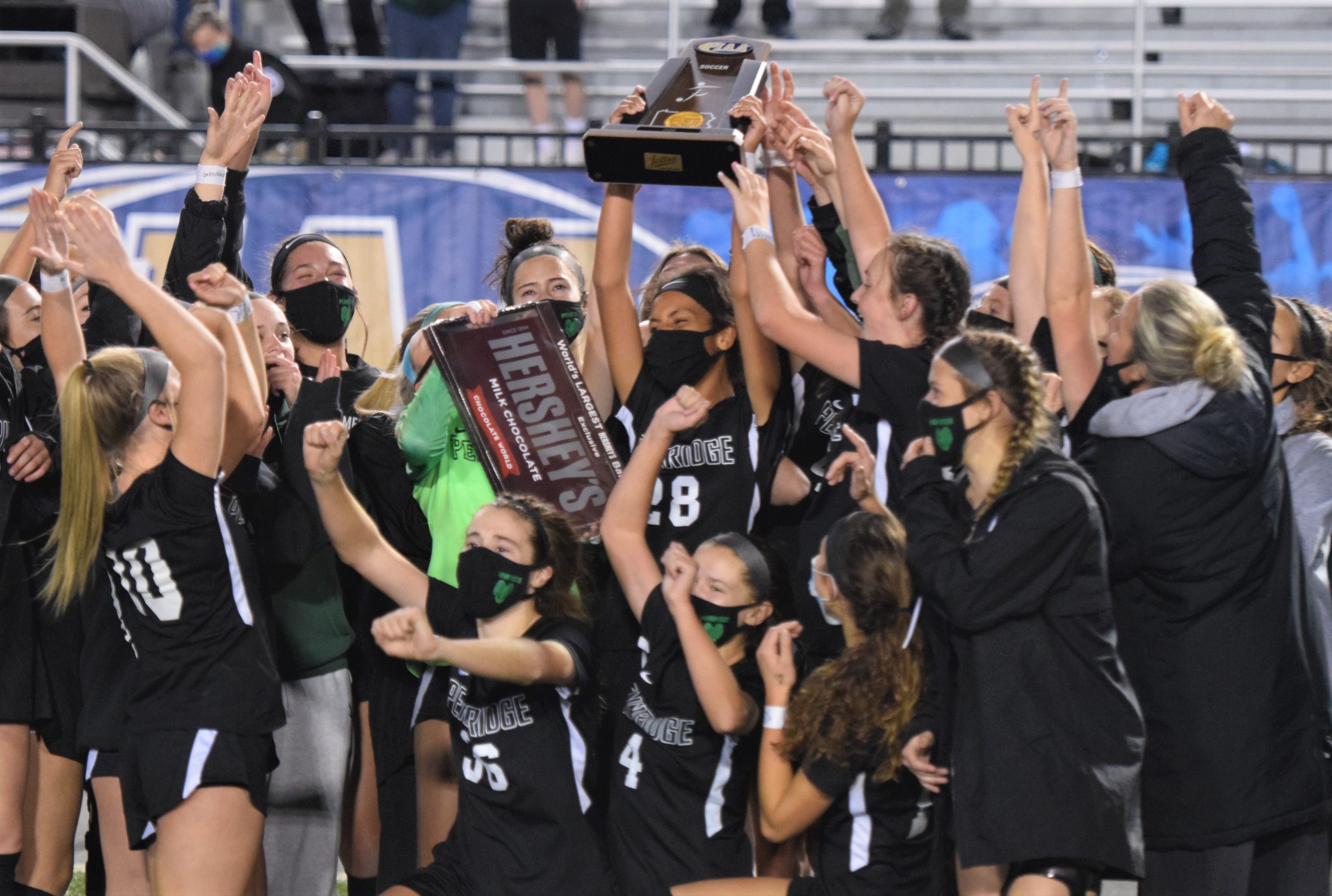 HERSHEY >> Pennridge has proven itself capable of long postseason runs and many observers this fall aren’t expecting that to change.

With the Rams projected to return eight of their 11 starters from Saturday’s 1-0 double overtime win against North Allegheny in the PIAA 4A title match, it’s not hard to see why. Unlike previous runs into states, Pennridge won’t have to heavily reload next fall, but that also doesn’t guarantee anything.

On paper, it’s promising but the team’s upperclassmen know the reality is going to be very different.

A major factor in the team’s success this fall was the composure of its young players. Freshmen stepped up in huge moments all year including the postseason and the moment rarely seemed too big for them.

Pennridge, which should also get high-scoring winger Emily Kriney back from injury next season, has a ton of firepower due to return. Even in the wake of Kriney’s injury, the Rams showed adaptability and it opened a path for more underclassmen to fill in.

Replacing the three senior starters – Lindsey DeHaven in the midfield along with Kera Dam and Cady McKean on defense – is still a tall order. Co-captain DeHaven, a four-year varsity starter, said she’s eager to see what the program does over the next few years .

Every year, the two games against the Rams get circled on the calendar of each other SOL Colonial team and non-conference opponents see a match with Pennridge as a measuring stick. Now carrying a state title on top of their back-to-back district titles and five straight SOL titles, the Rams truly won’t have any room for slacking next fall.

In preseason, coach Audrey Anderson asked her team if its expectations were too much with such a young team. Her players resoundingly said it wouldn’t be then proved it, something they will have to do again next season.

“I think that’s what they expect of themselves,” Anderson said. “I’m a tough coach, I have high expectations of my players. The fact the team trusted those young players and those girls responded, it speaks volumes about the character of these girls.”

Pennridge defenders scramble in the penalty area to save a North Allegheny goal attempt during the PIAA 4A championship game in Hershey on Nov. 21. (Austin Hertzog – MediaNews Group)

Anderson described seeing the ending of Saturday’s game in a dream back in 2018.

While that positive memory turned into reality on Saturday, a couple ghosts of the team’s last trip to Hershey made the trip as well. Pennridge’s frantic group defense of a North Allegheny corner kick came in front of the same goal Souderton had scored on to win the 2018 state title, a thought that did not elude the Rams’ coach as she watched her players mount a valiant stand.

“I was thinking about 2018 and it was that same goal where we got scored on and I couldn’t be happier that we had that much hunger to clear that ball out,” Anderson said.

Pennridge’s Leah Malone carries the ball up the left sideline during the PIAA 4A championship game. (Austin Hertzog – MediaNews Group)

Overtime wasn’t kind to the Rams in 2018 either, so when Saturday’s contest went into extra time, Malone’s resolve only grew. She and DeHaven were the only players currently on the roster who had been on the field two years ago and the junior forward didn’t want a repeat of that ending.

Malone would go on to bag the winning goal in the second overtime, but she also admitted to a negative flashback as regulation ended.

“Going into overtime, I was thinking ‘here we go again,'” Malone said. “Pulling up here today, it was an overwhelming feeling, almost negative, like I still had that pit in my stomach from losing two years ago. We wanted a different outcome. As soon as I stepped on the field, I thought back to where I was standing when that goal went in and said I couldn’t let it happen again.”

For a defender, 99 out of 100 times getting the player they’re responsible for to pass or dribble the ball backwards is a winning move.

Anna Croyle got a first-hand look at the exception to that rule on Saturday. North Allegheny senior catalyst Sarah Schupansky, a Pitt recruit, thrived on the negative plays.

“My goal was to not let her turn,” Croyle said. “I stayed behind her when she received it, but then she would start to dribble backwards and in the first half, I kept following her and it left a gap in the back.”

“Their attacking midfielder and forwards were making runs off of her so that was really hard to defend,” DeHaven said. “She kept dribbling backward and we had to adjust to it in the midfield.”

It was already a lot asking a freshman center back to handle a Division I-bound playmaker but with Schupansky turning negative into positive for her team, the Rams knew they had to change things up.

Croyle would stay on Schupansky, but she wouldn’t trail the Tigers senior after the initial challenge. Instead, Pennridge put the ball-winning skills of DeHaven to work to keep their shape intact.

“At halftime, we talked about it and we decided I would try to keep her from winning it out of the air and Lindsey did a great job coming back so I could then drop and fill the gap,” Croyle said.

DeHaven and goalkeeper Sierra Shaeffer also noticed the disruption North Allegheny’s unorthodox approach had on the Rams’ defensive form in the opening 40 minutes. The halftime adjustments, plus plenty of communication between Shaeffer, McKean and Croyle, helped stitch things back together.

“There was always a player open in the middle and in the first half, we had a problem with that,” Shaeffer said. “In the, I can’t even say second half, this whole second part of the game, we covered that a lot better.”

Joey Tomlinson and Sophie Craig are two of the smallest players on the Rams’ roster.

Saturday, they played like two of the biggest. Tomlinson, a sophomore, was a critical sparkplug along the Rams’ frontline and not only gave the starting trio of Malone, Riley Hepler and Tori Angelo some rest but gave North Allegheny things to think about.

Matched up with bigger players who weren’t afraid to be physical, Tomlinson didn’t shy away from going at them.

“I needed to use my speed, that’s my big thing,” Tomlinson said. “It was so tiring but I think we all left it on the field. It’s hard to match up with bigger players, especially me being short, but we know we can always bring the energy.”

Craig, a freshman, gave the Rams a lift as a central midfielder for the second straight game. Primarily a forward during the regular season, Craig added a bit of everything Pennridge needed to solidify its midfield against Parkland and North Allegheny.

Like Tomlinson, Craig didn’t hesitate to tangle with the Tigers’ physicality and won some critical balls and connected passes to keep possession. The duo, who also helped spark Pennridge’s second-half takeover against Abington in the district tournament, brought the bench’s energy onto the expansive field at HersheyPark Stadium with them.

“I look at our team and think we’re so deep, we have a lot of players who can do great things,” Anderson said. “We have a lot of speed and it was really key that our forwards pressured them and forced any kind of mistakes. Any time we could eat away at them, put pressure on and tire them out, it may have allowed us to finally get in behind them.”

Malone said the energy from the reserves was infectious, whether it was the lift from the players coming on the field or the constant shouting and support coming from the bench.